Vancouver is an incredibly bike-friendly city, with a comprehensive network of bike lanes, a bike sharing system, and a supportive community committed to cycling. Nonetheless, even though cycling is a more affordable mode of transportation compared to driving, there are still many barriers. Fortunately, Vancouver organizations are making biking even more inclusive and accessible to everyone in the city.

Our Community Bikes (OCB), now run by the non-profit PEDAL (Pedal Energy Development Alternatives) Society, has been operating in Mount Pleasant since 1993. “It was the project of BEST [Better Environmentally Sound Transportation] at the time, which was another transportation non-profit in the city, in seeing a need for a community bike shop. They started Our Community Bikes as a space where people could access bike services and really tried to decrease the barriers of who could access bike services,” says Sarah Thomas, Shop Manager of OCB (2429 Main Street). A few years after OCB was launched, PEDAL was formed, taking over from BEST.

OCB is a multi-purpose space. It’s a social enterprise bike shop, selling parts and refurbished bikes, as well as offering repairs and tune-ups. By selling a wide range of parts—many from older or vintage bikes—as well as bringing used bikes back to life, OCB champions the sustainability and affordability of cycling. 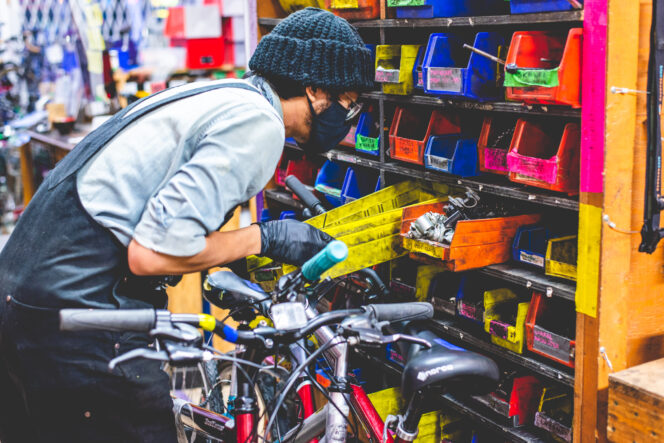 It also offers a variety of programs to increase the accessibility of biking. “We have the Pedals for the People [PFTP], which is a free bike and bike access program, helping make sure people experiencing extreme ongoing financial hardship have access to a bike and support for maintaining that bicycle, so that they can use it for transportation to get around the city,” Thomas says.

PFTP provides 80 to 100 free bikes annually, as well as subsidizes repairs in the thousands of dollars. They also offer Tuesday and Sunday clinics (11:30am to 2:30pm) at Oppenheimer Park in the Downtown Eastside to tune up bikes, wheelchairs, and walkers for over 60 people each month. And finally, they administer the Russell Eyton Bike for Kids fund that gives young people experiencing poverty a free bike and helmet.

Thomas says there are various barriers that could prevent someone from accessing cycling, including monetary constraints. In addition, people can feel intimated or marginalized by the dominant biking culture. To combat this barrier, OCB holds Access Nights, such as Women, Trans, and Queer (WTQ) Nights on the first and third Wednesdays of each month and Deaf Access Nights on the third Tuesday of each month. The WTQ Nights provide a time and a venue for individuals to drop by and ask questions and get help from women and gender variant mechanics. The Deaf Access Nights are provided in ASL.

In this way, OCB facilitates people forming community and communicating about a shared passion during designated nights. “We’re trying to be a safe space where people don’t have to feel it’s a problem if they don’t know something, where people can speak with their peers, and where the staff reflects the community that we serve,” Thomas says.

More than just the physical parts, OCB provides new and long-time bikers with intangible benefits. “Cycling at its root as a means of transportation is very empowering for a lot of people,” Thomas says. Some people have difficulties walking, with biking being a much easier way for them to access the breadth of Vancouver and its resources. Suddenly, they have transportation for getting to their job, going grocery shopping, and visiting the doctor. 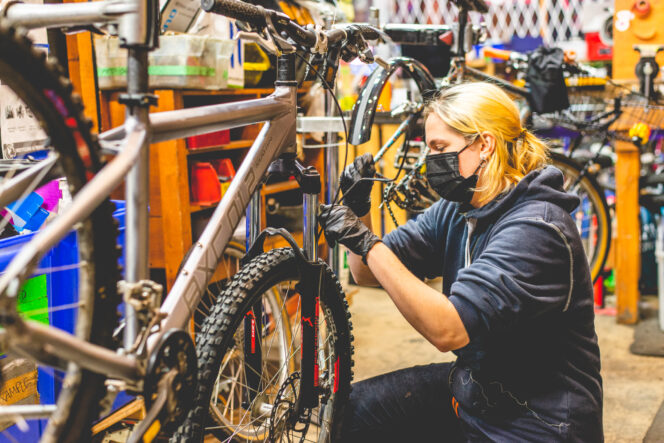 OCB wants to make it easier to access bike skills as well. A 5-week mechanics course covers everything from bike anatomy to wheel mechanics, and they also host small workshops. Any of their Access Nights and tune-up/repair services give people opportunities to ask questions and learn. “The education component is really important at a community bike shop, and we are interested in helping people build bike knowledge so they understand the bike they’re working on,” Thomas says. 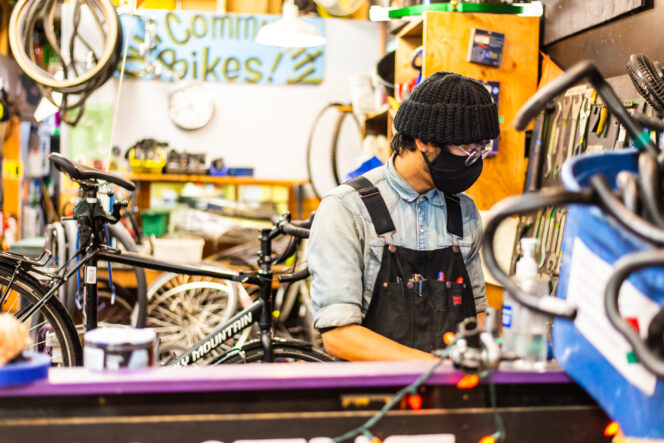 Kickstand (1187 Parker Street) in East Vancouver does similar invaluable work when it comes to biking accessibility and inclusion. Founded in 2012, Kickstand was the initiative of a group of residents who thought East Van would benefit from a community-run bike shop. “It started as a resource centre and provided a workspace for anyone to fix their bikes,” says Cassandra DePetrillo, Community Engagement Coordinator for Kickstand.

Kickstand was initially funded by Britannia Community Services Centre. In 2016, they incorporated as a non-profit society, and continued to expand their invaluable services. DePetrillo says that what makes Kickstand particularly unique is that it’s 99% volunteer-run, making it a very grassroots organization. Kickstand attracts likeminded people in East Vancouver who care about the environment and who want to welcome everyone into their community. DePetrillo feels that the organization very much reflects the special character of East Vancouver and responds to the needs of those in the community facing cycling barriers. 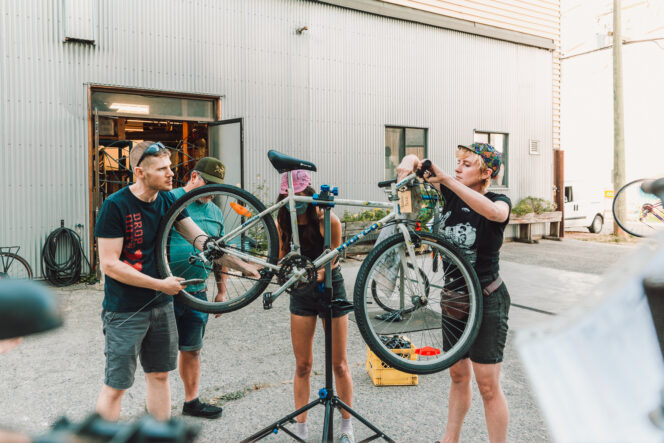 DePetrillo has been cycling for over a decade and started volunteering at Kickstand because she was yearning for connection and wanted to increase her knowledge and skills related to bikes. “I heard about Kickstand through the community—and here I am,” she says.

DePetrillo found shared values among the other volunteers at Kickstand, especially when it comes to caring for the planet and for other people. She highlights the many obstacles that can stand in people’s way when it comes to biking. “The barriers are things such as gender, sexuality, race, religion, and social status. Also, knowledge on bikes: if you don’t know to pump your tubes, it can be very intimidating. Going into a bike shop when not a cis male can be intimidating,” she says.

Kickstand is deeply committed to being inclusive—and makes it as easy and as accessible as possible for people to get their bikes fixed and to learn about them. “If we feel respected, then we feel welcomed and safe in these spaces and then that provides a place to learn and grow and educate ourselves,” DePetrillo says. Kickstand offers use of their shop on a sliding scale from $1 to $15 per hour. No one will be turned away due to a lack of funds or knowledge. They generate income for subsidizing bike repairs through stand fees, bike and parts sales, and fundraising. 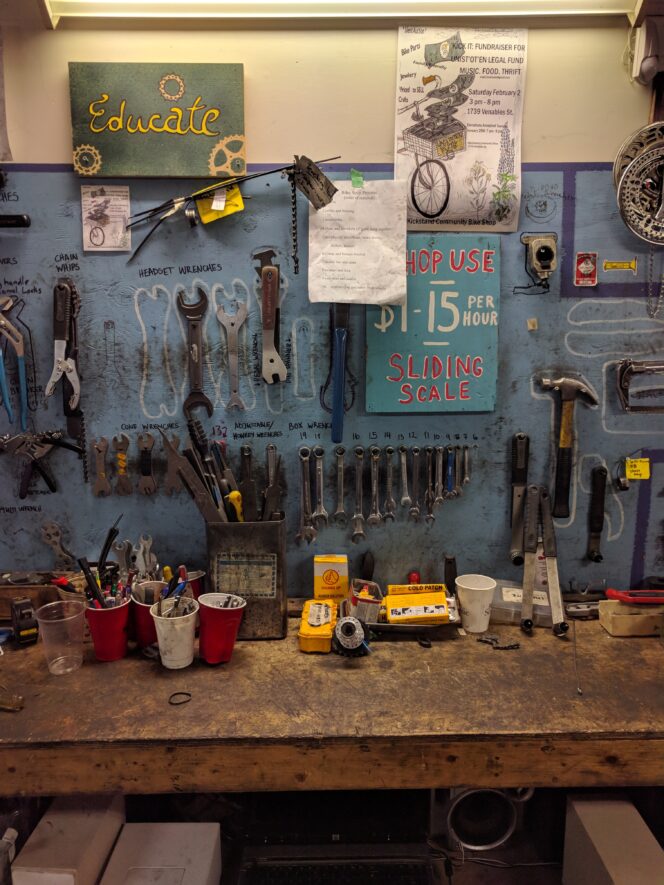 Shop time is free every Thursday at WGQT (Women, Gender, Queer, Trans) Nights where female and gender variant mechanics and volunteers are there to lend a hand. Two volunteers suggested the event as a safe, inclusive, and fun regular night. “I think it speaks to the passion of the volunteers, how incredibly important this shop is to the community,” says DePetrillo.

She’s particularly excited about a partnership with Rainbow Refugee, a Vancouver community group that helps newcomers who are fleeing persecution due to their gender identity, sexual orientation, or HIV status. Through a fundraising initiative called Welcome Wheels, Kickstand is giving newcomers bicycles that are matched to them specifically. “A bicycle is a sense of freedom. Once you have that mode of transportation, it’s free. You are free to explore the city, get exercise, and transport yourself,” DePetrillo says. Donations can be made via Rainbow Refugee (find Welcome Wheels in the “Fund” drop-down menu).

Kickstand encourages self-sufficiency and confidence, even as it cultivates community and friendship. People receive hands-off advice in order to encourage learning. “People leave Kickstand with more knowledge, and with knowledge comes power. They have confidence. And they can use that in their everyday life and pass that on to other people in their community,” DePetrillo says. She herself learns something new every time she’s there.

The organization promotes a circular economy. They accept donated bikes, fix them and make them completely ready to ride on the road again, and if not, strip them of parts that are still useable. The rest then gets recycled. They have partnerships with various bike shops in town to collect parts they don’t want. “We’re constantly promoting recycling, upcycling, and repairing donated bikes. In the bike world, there’s so much to use and reuse,” DePetrillo says. 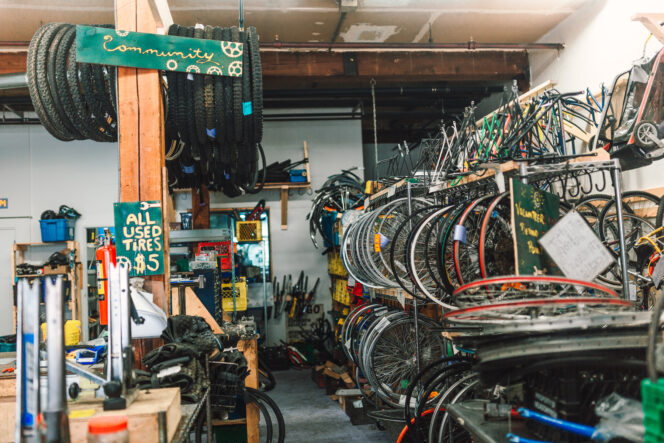 She’s clearly proud of the positive impact that Kickstand is having on Vancouver and on people interested in cycling. “I think cycling in general is a conscious act, a radical act of environmentalism. I think we’re taking it a step further to make sure everyone is welcome,” she says.

Both Kickstand and Our Community Bikes invite anyone interested to drop by and get involved. They’re always looking for volunteers for nurturing and growing their diverse and inclusive communities.