Michelin Sets Its Sights On Vancouver

Destination Vancouver is so excited to share the news that the MICHELIN® Guide is coming to Vancouver. Vancouver now joins Toronto as the only MICHELIN Guide destinations in Canada and among only seven in North America.

The inaugural edition of the MICHELIN Guide Vancouver will be announced this fall. Michelin’s anonymous inspectors award MICHELIN Stars – One, Two or Three – to unparalleled cuisine. They also bestows Bib Gourmand ratings on restaurants that offer great quality food at good prices, and the MICHELIN Green Star is given to restaurants that are leaders in sustainable gastronomy.

Destination Vancouver wanted to showcase the next generationof culinary talent, so we asked students from the Pacific Institute of Culinary Arts (PICA) and the Vancouver Community College (VCC) School of Hospitality and Culinary Arts to collaborate on designing, preparing and presenting a unique menu for a reception to celebrate the launch. 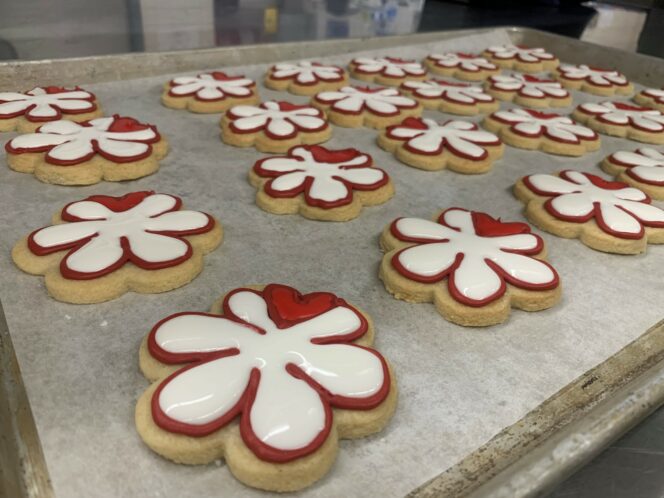 MICHELIN branded cookies made by the students at Vancouver Community College

Chef Matthew Kammerer, Executive Chef of the Two-MICHELIN-Starred and Green Star-awarded Harbour House Inn was asked to work with the students and share his approach to sustainability.

He challenged them to look for ingredients harvested locally, produced and packaged sustainably, and prepared with minimal waste.

“As a former culinary student myself, it was a privilege to be back in this environment. This time around it was exciting to be in a mentorship role to help the VCC and PICA students be inspired and to learn about a more sustainable way of cooking,” said Chef Matthew.

“I was most impressed by their feedback and understanding of what sustainability can actually mean to them. Their creativity and dedication to their craft was on full display.”

Vancouver has long enjoyed tremendous acclaim for its culinary scene, and the MICHELIN Guide Vancouver further elevates the city’s reputation as a global dining destination.

What is really exciting is that aspiring young chefs who want to train under the guidance of a MICHELIN-Starred team now have the opportunity to do that in Vancouver.

The first MICHELIN Guide Vancouver selection will be revealed in the fall, and it will showcase outstanding local restaurants and professionals receiving Michelin distinctions.