Warm-up this winter in Vancouver by getting your blood pumping with an adrenaline rush. Try extreme sports like ice climbing and bungee jumping, ride a snowmobile or bobsled, or soar through the air on a zipline or helicopter. You won’t want to miss these adventurous Vancouver winter activities.

Challenge yourself to get some air under your skis or snowboard this winter with a visit to a terrain park. Mount Seymour, Grouse Mountain, Cypress Mountain, and Whistler Blackcomb each have multiple terrain parks with features ranging from beginner to expert so you can hit the jumps, bumps, rails, and boxes. If you want to try some extreme features, head to Whistler Blackcomb to ride the huge 18-foot-tall half-pipe. 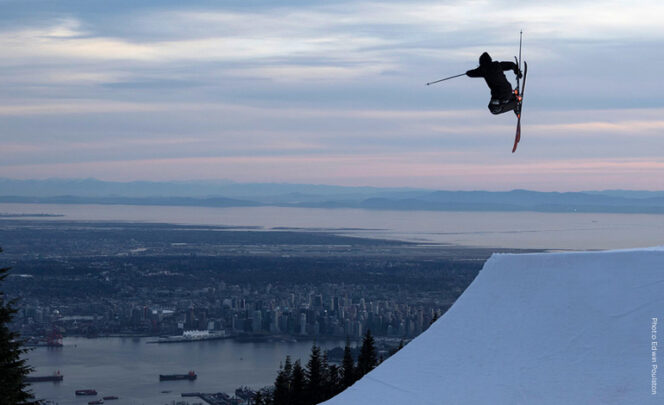 Zipline Through the Snow

Ziplining isn’t just a summer activity! Bundle up warm, then strap into a harness and fly through the snowflakes in Whistler. Both Superfly Ziplines and Ziptrek can get you flying. 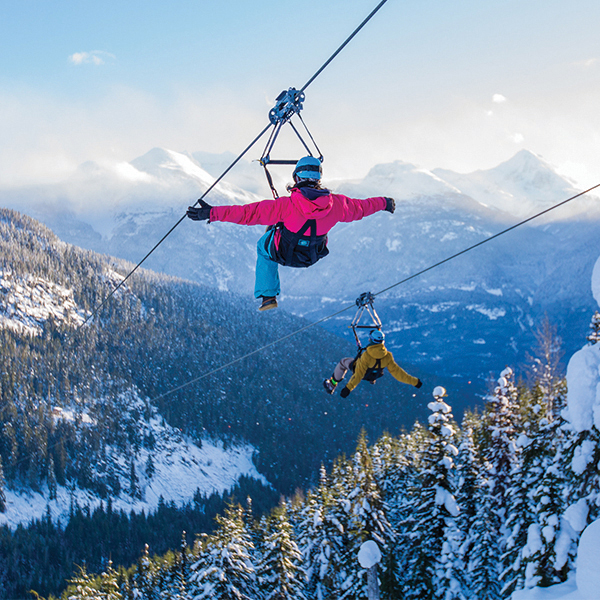 Have you ever wanted to climb a frozen waterfall? It might seem extreme, but with the help of expert guides, some crampons, and an ice axe, even beginners can make it a reality. Book a trip with Mountain Skills Academy & Adventures. They’ll lead you to an icy waterfall near Squamish or Whistler, supply all the safety gear, and coach you up the wall. 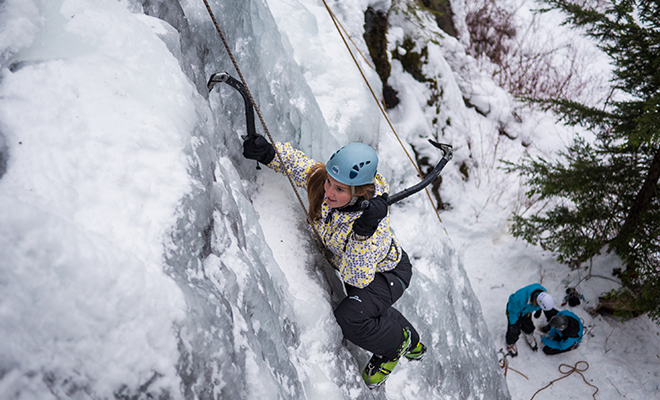 Did you know you can ride on the 2010 Winter Olympic bobsled track in Whistler? You’ll climb into a 4-person bobsled with a trained pilot and hurtle down the track, hitting speeds up to 125km an hour! Book your ride through the Whistler Sliding Centre, a non-profit organization that helps future Olympians train in bobsled, luge, and skeleton. 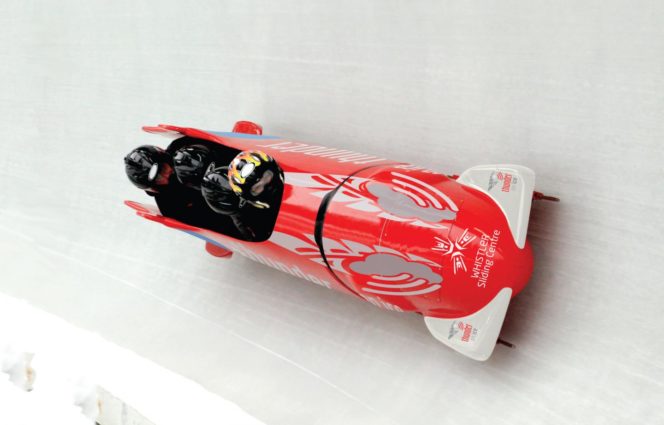 See the snowy mountains from the air on a helicopter flightseeing tour with Blackcomb Helicopters in Whistler. You’ll fly over 12,000-year-old glaciers and finish the tour with a unique mountain top landing. 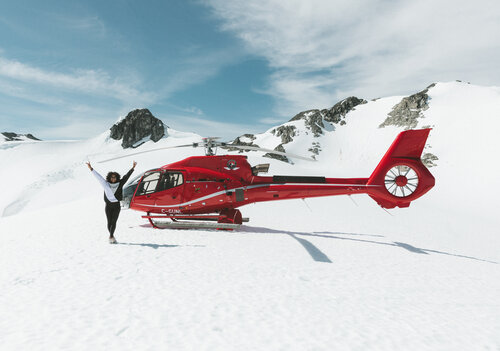 Add in a snowy scene, and bungee jumping can seem almost serene. Well okay, there’s not much serenity to be found in plunging 50 meters off a bridge, but the winter wonderland around you might distract you from your fear of heights! Whistler Bungee offers jumps all winter long from their bridge over the frozen Cheakamus River. 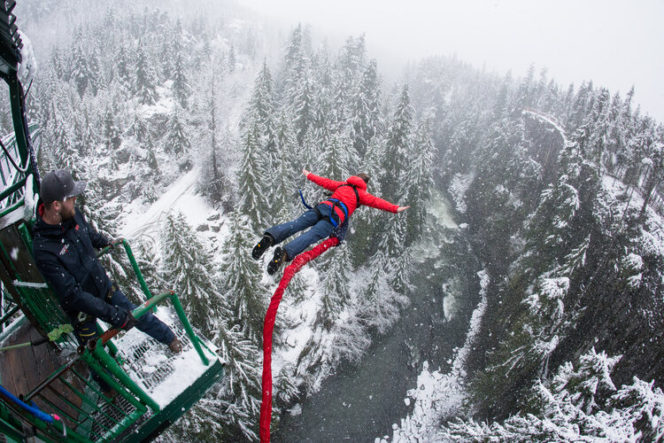 Explore the backcountry on a snowmobile. It’s an easy way to go deep into BC’s wilderness while getting a bit of an adrenaline rush as you drive a powerful machine. Don’t forget your camera to capture the spectacular mountain views. Both Canadian Wilderness Adventures and The Adventure Group offer snowmobile tours in the Whistler area.

A group snowmobile tour near Whistler. Photo: The Adventure Group

Drive Your Own Dog Sled

Go dashing through the snow in a dog sled. After a professional musher helps you harness up a team of adorable sled dogs, you’ll ride in a cozy sleigh and even have a chance to drive the team yourself. Contact Canadian Wilderness Adventures to book a trip through the old-growth forests of the Callaghan Valley near Whistler. 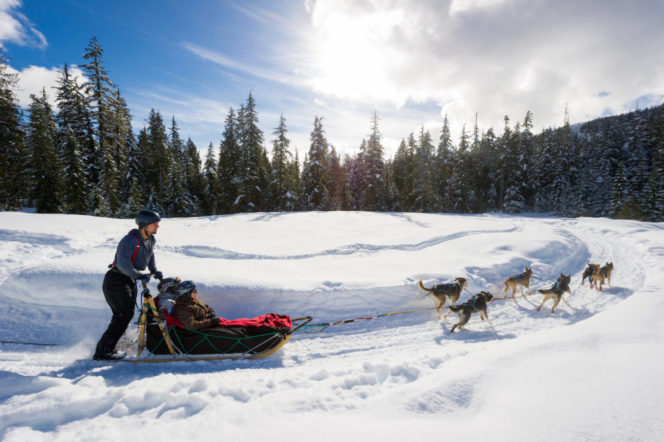 Leave the crowds at the resort behind and ski tour into the Whistler backcountry with the help of an experienced guide from Mountain Skills Academy. If you’ve never backcountry skied before, you can enroll in an intro course to learn the basics including both uphill and downhill techniques. 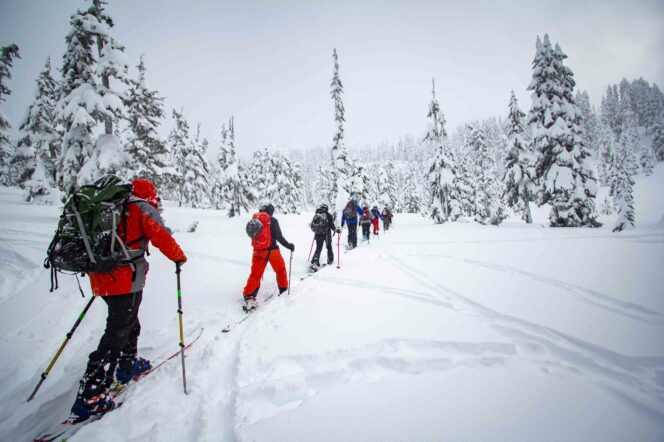 
By Taryn Eyton
Source Inside Vancouver

5 Things To Do At Tynehead Regional Park