Officially opened in 2011, the VanDusen Botanical Garden Visitor Centre is not only aesthetically stunning, but also highly acclaimed for its cutting-edge design that promotes energy efficiency, carbon sequestering, and minimal ecological impact.

John Ross, Registered Architect and Project Manager at the City of Vancouver, was brought on board in 2007 to help with an ambitious project to construct a new Visitor Centre as the gateway to the VanDusen Botanical Garden and as a design-forward symbol of its green ethos.

The Centre emerged from a partnership between the Vancouver Parks Board and the Vancouver Botanical Gardens Association, who wanted to explore the green possibilities of the new Visitor Centre. “Perkins & Will were selected as the architects. They were called Busby Perkins & Will at the time. Peter Busby was the Principal involved, and he was very keen on the Living Building Challenge, and got us all excited about it,” Ross says.

Ross explains that they collectively embarked on an intensive learning process about the Living Building Challenge (LBC), the most stringent green building standard that certifies according to “petals” or performance categories. The design team also aimed for LEED (Leadership in Energy and Environmental Design) Certification, another way of measuring the performance of a green building. Upon completion, the building was awarded LEED-NC-Platinum Certification, a prestigious achievement, as well as was deemed the Most Sustainable Building of 2014 by World Architecture News.

Along with a petal for Health and Happiness (air quality, indoor environment), the Visitor Centre received an uplifting Beauty petal for its gorgeous design that melds the natural with the technical. “The general form and the architectural expression are what make it truly unique. You could look at it like a flower or a plant. The architects used an analogy of a leaf form for the roof shape. They picked a particular image of a native orchid leaf they found in a book. Together, with Cornelia Oberlander [a Vancouver landscape architect], they seized on this image and tried to use it as much possible in the architectural form,” Ross says. 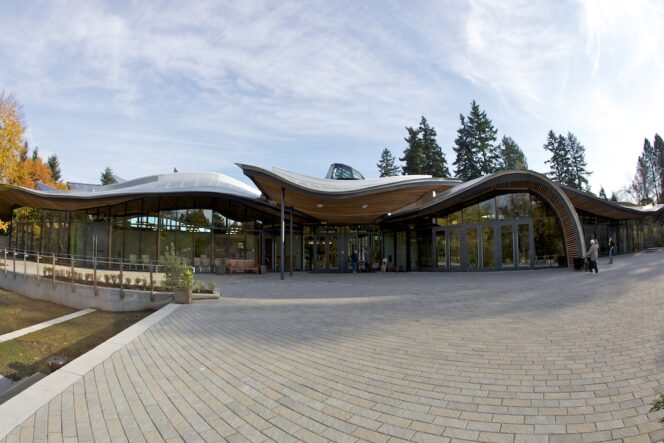 The result is a green roof, which consists of an undulating series of gorgeous orchid petals that meet at an oculus, a central point that forms the skylight of the atrium. Complex 3D modelling was used to visualize and technically craft each of the over 70 unique segments that make up the roof. They were prefabricated off site, delivered, and then painstakingly assembled into its distinctive floral design. “It was a unique process to put together, and it’s a unique image,” Ross says.

The petals also serve an incredibly important functional purpose, with one of them housing a solar hot water tube array and the other serving as a rainwater catch-basin. The building aims to achieve annual net-zero energy through a wide array of renewable and energy-efficient design features, including solar hot water tubes, geothermal boreholes, and solar photovoltaics. Natural ventilation from a solar chimney and large overhangs that shade the building keep it cool without the use of air conditioning. Substantial insulation also reduces energy costs. “A lot of effort went into trying to be passive and to try to generate where we could when it came to reusable energy,” Ross says. 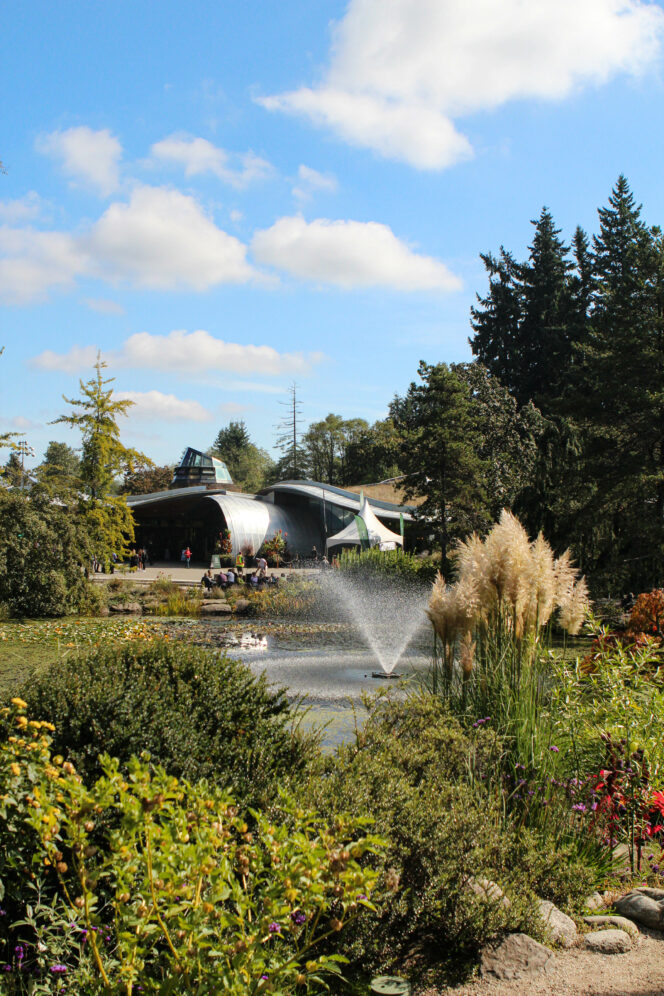 Even water is recycled in the building. Ross explains: “We tried to make a really sustainable statement. We harvest rainwater. There’s a huge cistern under the building that collects rainwater all year.” This rainwater is filtered to be used as greywater (basically for the toilet system in the building) and then the blackwater (waste water) is treated by a bioreactor and released.

The Visitor Centre also received an LBC petal for Materials. Ross describes the meticulous and laborious process of ensuring materials used in the building were not on the Red List, many of which have negative effects on the environment and people’s health. Some of them, like PVCs, are very common but can be substituted out. “With global warming, we want to be careful about using some of these things. There are alternatives that can be used, and it’s important to explore that when we’re building new buildings,” Ross says.

The building’s extensive use of Pacific Northwest wood in its exterior and interior design makes it both visually attractive but also environmentally friendly due to the wood’s carbon sequestering. Wood products are integral in the design and structure of the curving roof, and also feature prominently in finishings and millwork. All of this wood contributes to a feeling of west coast warmth. The building was so noteworthy that it received a Wood Innovation Award at the 2013 Wood WORKS! BC Wood Design Awards. 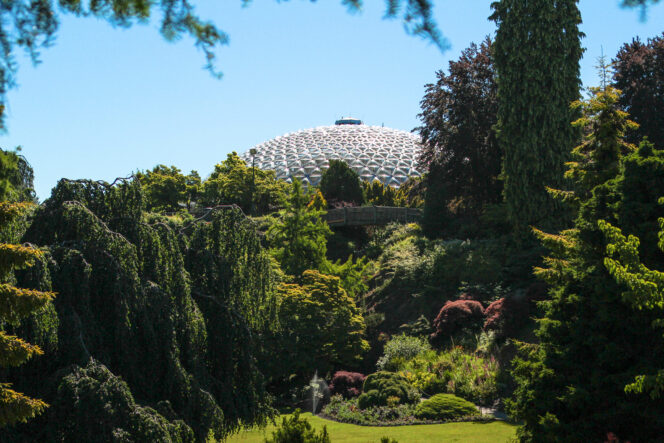 Bloedel Conservatory; Sourced from the City of Vancouver

The VanDusen Botanical Garden Visitor Centre builds on a tradition of innovative eco-design in the city. Bloedel Conservatory, also operated by the Vancouver Botanical Garden Association and the Vancouver Park Board, is located at nearby Queen Elizabeth Park at the City’s maximum point. The two make for a wonderful pairing of past and present green buildings. 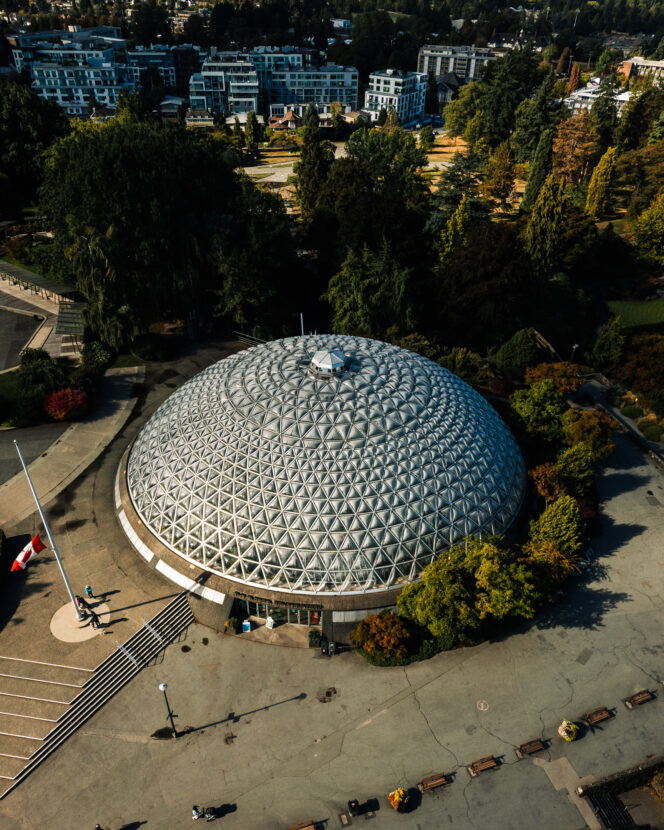 Opened in 1969, the Conservatory was funded by Prentice Bloedel, former Vice Chairman of MacMillan Bloedel, and spurred by Stuart Lefeaux, superintendent of the Park Board, and Bill Livingstone, deputy superintendent, who wanted to aid the public in appreciating plants. Built on a former rock quarry, the building is the largest single structure conservatory in Canada and the second biggest in North America. 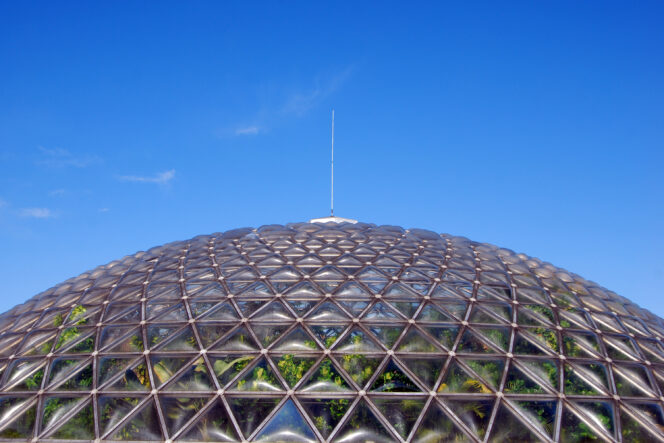 At the time, it utilized ground breaking technology in the construction of its triodetic dome, which uses triangular building components to construct a rounded roof. The architect firm, Underwood, McKinley, Cameron, Wilson, and Smith, built on the design principles of the Climatron in St. Louis as well as those of the Expo ’67 Biosphere in Montreal, which was imagined by Buckminster Fuller. The structure consists of anodized aluminum pipe triangles with 1,488 Plexiglas bubbles. Air circulating units and mist sprayers maintain the humidity and temperature within the dome.

Free of supporting columns, the dome allows visitors to feel like they’ve stepped into an unobstructed oasis of plants and exotic birds. The futuristic eco-design was awarded a Vincent Massey Award for Excellence in Urban Environments in 1971. Bloedel Conservatory was revamped in 2014 with the replacement of its Plexiglass panels, making the heritage-designated building as vibrant as it was when first built. 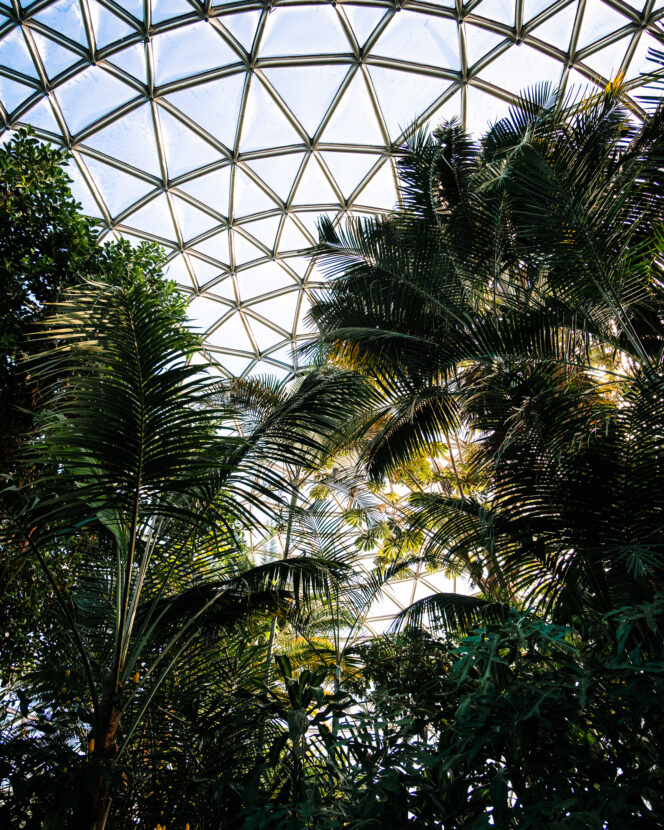 Photo: Jeremy Lee; Photo sourced from the City of Vancouver

A circular path takes visitors through the three simulated ecosystems contained within the dome: tropical rainforest, subtropical rainforest, and desert. Through the Conservatory’s celebration of biodiversity, it conveys the importance of preserving plants and wildlife, as well as protecting habitat.

Although separated by over four decades, both the VanDusen Botanical Garden Visitor Centre and Bloedel Conservatory exemplify Vancouver’s continued commitment to advanced sustainable design that educates and inspires.

How The Big Game Is Bringing Economic Opportunity To Los Angeles