Sourced from The Métis Bannock Queen

Darnell Stager, manager at Salmon n’ Bannock (7-1128 West Broadway), ate fried bannock with raisins as a child. Stager, who is urban Indigenous, meaning he was born and raised in Vancouver, connects bannock with memories of family. “I always had aunties, grandmas, and my mom making bannock. It’s a pretty common shared history with Indigenous people across the country,” he says.

Stager emphasizes that while bannock is a common food item among Indigenous peoples, it can’t and shouldn’t be reduced to a single recipe or taste experience. “We’re so diverse as people, and we’re so diverse even within regions across this vast territory. So, bannock is different everywhere you go. Sometimes aunties fight with each other over whose bannock is better,” he says. Even in the same household, bannock-making can vary. Growing up, Stager’s aunt made the bannock dough sweeter, while his mother made it more neutral. 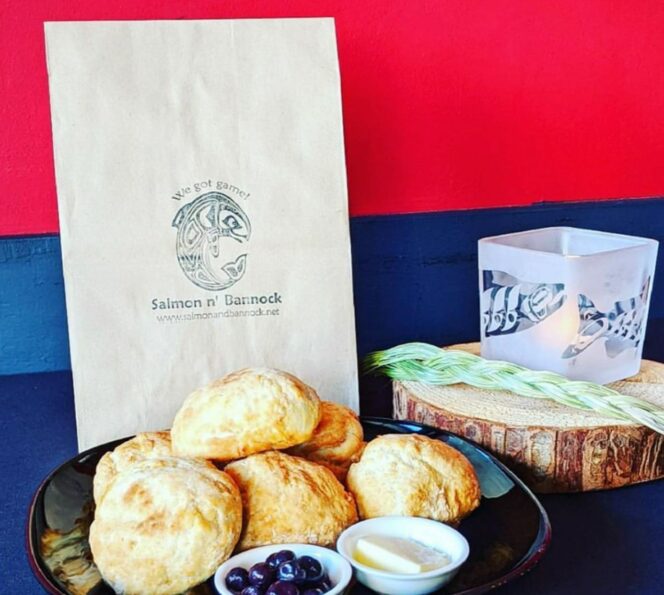 Stager explains that while bannock has multiple origin stories, forms of it existed pre-colonization, varying depending on locale: “Bannock is a pretty simple Indigenous bread, and people use whatever ingredients are close to them. So, bannock in the Pacific Northwest was classically made with tubers, like sweet potato roots, and further down south, people use ingredients like corn,” he says.

Now, in current times, bannock continues to be a food item for cooks to flex their creativity. “It’s that blank canvas. You can use fine brush strokes or broad ones,” says Stager. Cooking methods include frying, baking, or cooking it over an open fire. Some people use bannock dough to make waffles, while Stager recently used it to make a staff meal consisting of a flatbread topped with tomato sauce, game salami, and smoked cheddar cheese. 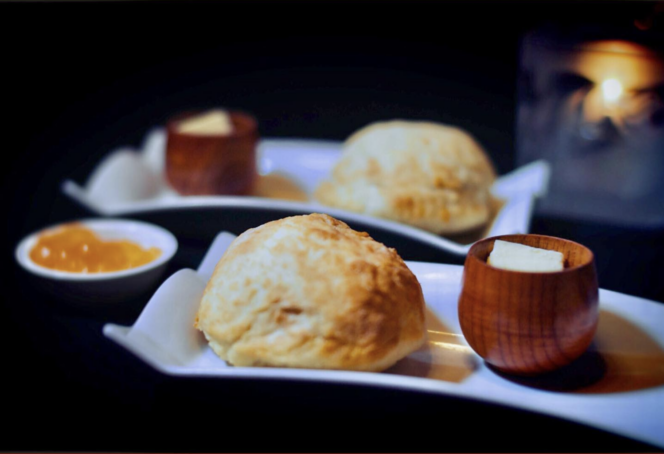 Bannock figures prominently in the menu at Salmon n’ Bannock, which is owned by Inez Cook, born in the city and a member of the Nuxalk Nation in Bella Coola. The restaurant is the city’s only Indigenous owned and operated restaurant. A simple yet delicious way to appreciate their take on bannock is to order their signature bannock with butter and rotating jams and jellies, like a lovely cedar jelly. The bannock arrives warm from the oven, the outside slightly crisp, and the inside texture fluffy and light. With the butter melting and the green aromatic notes from the cedar jelly, it’s an incredibly comforting start to the meal. The restaurant also has a gluten-free version. 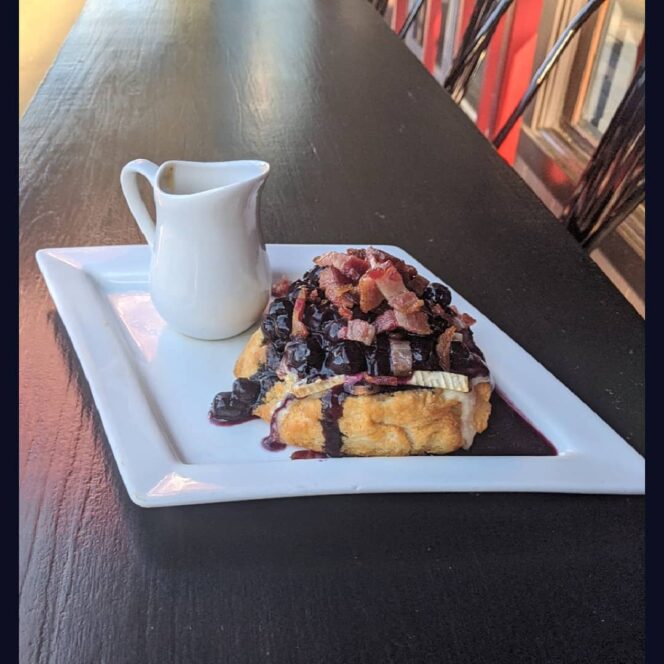 Other bannock starters on the menu include pemmican mousse with bannock crackers and Stager’s personal favourite, mushrooms on toasted bannock. “I like it because I’m a bit of a mushroom fiend,” says Stager. A small wedge is removed from the bannock and then sautéed mushrooms are nestled inside. Brie is then melted on top, and the dish is finished with sage infused blueberries and deeply flavourful bison gravy. Stager explains that the restaurant prioritizes products from Indigenous food producers, as well as sources, whenever possible, locally and seasonally. For example, diners have the option of adding bacon from Vancouver’s One Arrow Meats, run by Heat Laliberte, a Cree-Métis chef.

Their bannock is served as an accompaniment for many of their mains, such as their 24-hour roasted bison pot roast that also comes with bison gravy and seasonal vegetables. 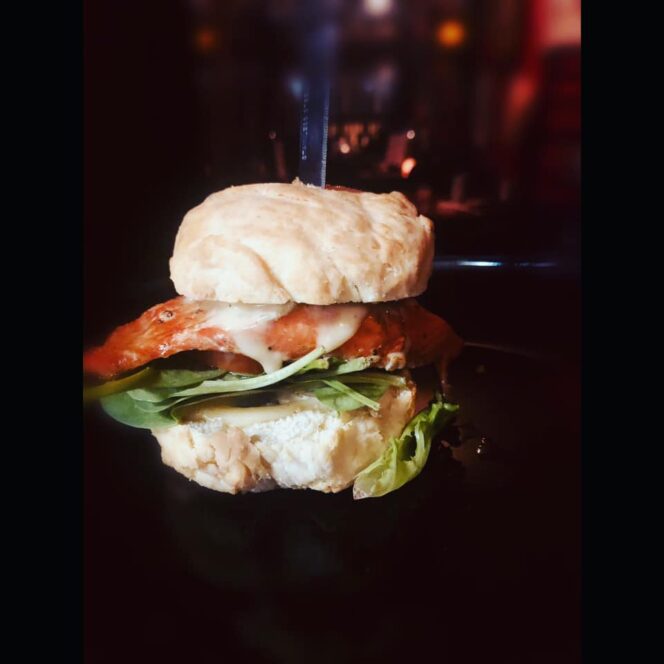 The restaurant’s signature bannock stands in for the bun for their urban sage smoked salmon burger. “One of the things we do at the restaurant is use a lot of our traditional medicines, those ingredients our grandmothers have been using for centuries and centuries but we prepare them in a nice modern way,” says Stager. Wild local sockeye salmon is smoked with white buffalo sage and also features a juniper berry rub. “It has a wonderful, unique flavour,” says Stager. Lemon aioli and house made pickles finish off the burger, which is served with either coleslaw with a spicy maple vinaigrette or sweet potato wedges. “The reason we have the sweet potato wedges is there’s actually an oral history that says they used to grow sweet potatoes in Stanley Park,” Stager says.

Besides Salmon n’ Bannock, there are a couple other places in town for feasting on bannock. Mr. Bannock Indigenous Cuisine has a food truck with items like a venison bannock burger, in addition to an online store with bannock mixes for making your own bannock at home.

Meanwhile, The Métis Bannock Queen is a particularly worthy local business to support since all proceeds go to local charities. Owner Jillian Brooks is Métis, hailing from Treaty 8 in Fort McMurray. Her family connects the origins of their adapted bannock to Scottish settlers who would make it on a bannock stone.

Brooks’ bannock recipe has considerable emotional significance. “This is my grandfather’s recipe that he got from his mother, and he passed it down to me when I moved out here. My mother had a book of well wishes from the family and recipes from aunts and uncles, and my grandfather, on one of the top corners, gave me his bannock recipe, so I was really honoured,” she says.

Brooks started The Métis Bannock Queen in June 2020 when the boxing gym where she used to coach was going through financial distress. She started making bannock to help raise money for them to great success. “After I donated to that gym, I ended up getting more interest from other parties and other people. Some restaurants even contacted me and other organizations that wanted to carry it. It seemed like there was a need for it, so I kept doing it and running with it, and it’s grown into this crazy business, which I’m really grateful for,” she says. 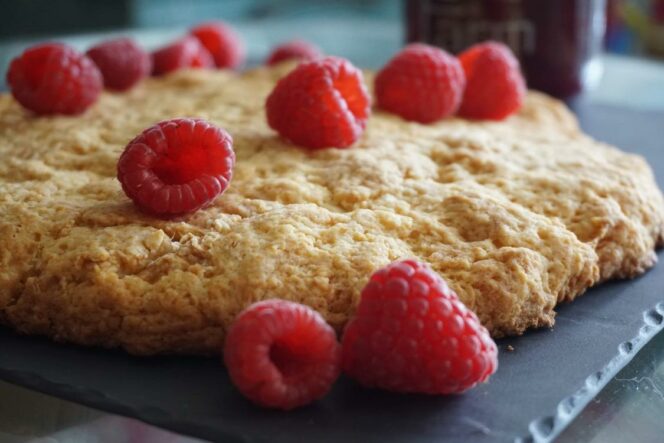 While Brooks’ grandfather kept his bannock classic, occasionally adding blueberries, Brooks has been experimenting with all sorts of interesting flavours, such as bacon and apple, and cheese and chive (Âpakosîsi-mîciwin wêchekaskosê). She prioritizes sourcing local, so in the summers was offering strawberry rhubarb, blueberry, and raspberry bannock. For the holiday season, she’ll be selling flavours like chocolate and orange (Maskihk îs Osâwâs), salted caramel (Kîkway ka sîwihtâkanowik Maskihk îs), and cranberry lemon. 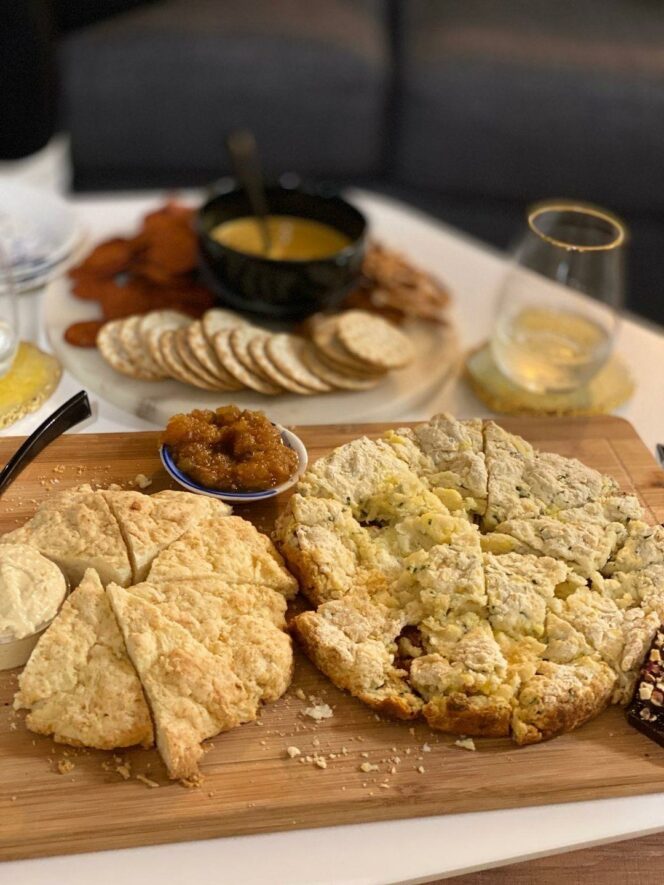 Sourced from The Métis Bannock Queen

Brooks bakes her bannock in a 6-inch cake tin but also makes mini ones that are great for a snack (kids especially like them). Her bannock can be ordered by direct messaging her via her Instagram account (@themetisbannockqueen); she will be available again via Seb’s Café and Corner Store in the new year. Brooks also works with Kula Kitchen to offer vegan and gluten-free bannock to pair with their plant-based meals.

In the past, Brooks has done collabs with other food establishments in town like MILA and DL Chicken to raise money for charities like the Urban Native Youth Association and Team 700, BC’s first Indigenous competitive youth boxing team. “Being in two restaurants this year was really exciting for me, a personal milestone,” says Brooks.

Making bannock is Brooks’ side gig, an inspiring vehicle for giving back to others. “It was instilled in me from my grandmother, my grandfather’s wife. She was very adamant in teaching us when we were younger that if you’re financially stable, you can help others. It just seemed like a no-brainer to me, and I’ve always been a caregiver and a giver to other people,” says Brooks. She is always on the lookout for non-profit organizations, like Team BC, that she can help out, and is considering other charities for the new year. For example, many local Indigenous communities have been struggling with the flooding this year, so Brooks is considering how she can be of service with her bannock sales.

For Brooks, her bannock business not only connects her to restaurants and charitable organizations, but also to her culture and other Métis individuals. “It’s brought me closer to my culture. I didn’t really know about it so much as a kid growing up. As I got older, I found I got more connected to it, so I learned more about the history of my family and my people in general. It’s been really awesome for me to discover that from this labour of love,” she says.

On her Instagram posts, she often includes educational informational in addition to content about her bannock. “It’s really important for me to give back but also to thank the people who paved the way for us,” she says.

Worlds Of Marvel: Discover The Food Onboard The Disney Wish

Michelin Sets Its Sights On Vancouver