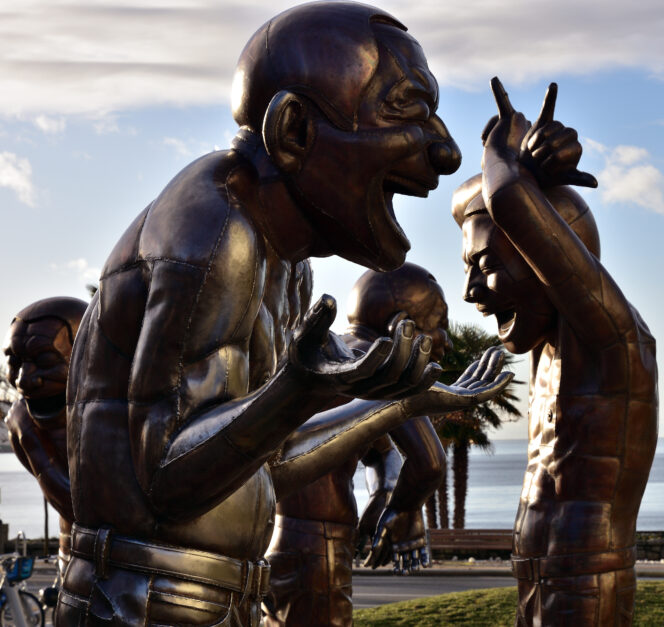 Standing by the fourteen cast-bronze figures that make up A-maze-ing Laughter at English Bay, you can’t help breaking into smiles and laughter. The 8-foot tall statues stand frozen in merriment, their mouths open wide and their eyes shut as they revel in whatever they find so amusing.

The work by Chinese artist Yue Minjun has become iconic in the city, with locals and visitors posing playfully with the figures when they come across them on their strolls. The laughing art pieces evidence the power of public art to create interaction and dialogue, and to make art present and accessible within Vancouver’s urban space.

A-maze-ing Laughter was part of the 2009-2011 Vancouver Biennale, and now permanently rests at Morton Park at the intersection of Davie and Denman Streets. Since its official beginning in 2004, the Vancouver Biennale, a non-profit organization, has been launching two-year public art initiatives that aim to democratize art by bringing it directly to people in outdoor spaces.

“Public art is supposed to make art engaging and accessible. It motivates people to get out in the community to observe art when they might not have been able to. There are people who don’t have the time, the resources, or the interest in going to art that is indoors in a gallery. They want to see it on their way to and from work, and where they socialize,” says Valerie Smaller, Director of Program Management and Operations.

Through a range of revenue streams, including grants, donations, and sponsorships, the Vancouver Biennale raises money to select and install both Canadian and international public art in prominent locations in Vancouver. “Even if you look at it and don’t like it, a public art installation starts a whole dialogue: ‘Why is it there? Where did it come from? Who is the artist? What country did they come from?’” And after that initial inquiry, deeper conversations can be had about the meaning of the artwork and the social messages it attempts to convey.

One particularly provocative piece is Vancouver artist Marcus Bowcott’s Trans Am Totem, which originally was located at Quebec Street and Milross Avenue, near Science World. The installation is composed of an old growth cedar tree stump with five scrap cars stacked on top of it. The tree comments on unceded Indigenous territory, as well as the local forestry and wood processing industries. “The cars talk about consumerism. We like to buy bright shiny things but what about reusable culture versus consumer culture,” says Smaller. The installation, which was originally part of the 2014-2016 exhibition is now in the City of Vancouver’s collection of public art. It is being refurbished elsewhere and will find a new home in Summer 2022. 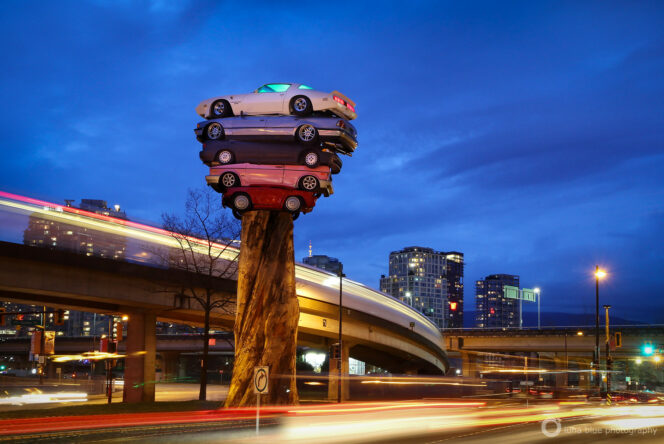 Selecting art and finding locations for the Vancouver Biennale’s public art requires an extensive amount of research, as well as both public and governmental consultation. Unlike art in a gallery, public art has to withstand the elements, particularly the rain in Vancouver. As a result, materials like bronze, steel, as well as plastic resins work well for west coast weather.

Curators of public art also have the benefit of open space to work with. While art galleries deal with space limitations, public art can and should be grand in scale. “You want very large pieces in a public space that draw attention and take up space,” says Smaller.

The works also tend to be in primary colours, like Chinese artist Chen Wenling’s The Proud Youth, which is located along the Yaletown Seawall. The bright red of the painted bronze sculpture is eye catching, but is also a lucky Chinese colour, and has general associations with passion and fire. The sculpture thus becomes a cultural and political statement with its colour choice. Other sculptures like Sunset Beach’s 217.5 Arc x 13 by French artist Bernar Venet are made of material, in this case, ribs of corten steel, that age with interaction with the natural environment.

Choosing the neighbourhood and exact site of a particular artwork requires taking into account a host of considerations. One key factor is choosing a site that gets enough traffic for the art to make maximum impact. Other times, a piece of art is a good cultural fit for a particular neighbourhood; and in other cases, an artwork’s message is general but it has specific spatial requirements that limit where it can go. Giants by Brazil’s OSGEMEOS consists of a massive spray-painted mural (23,500 sq ft) that had to be installed on tower-liked structures. In that case, Ocean Cement’s tall silos on Granville Island were the ideal fit for the whimsical, vibrantly patterned giants that OSGEMEOS designed. Add in the popularity of Granville Island as a Vancouver attraction, and the location made even more sense. 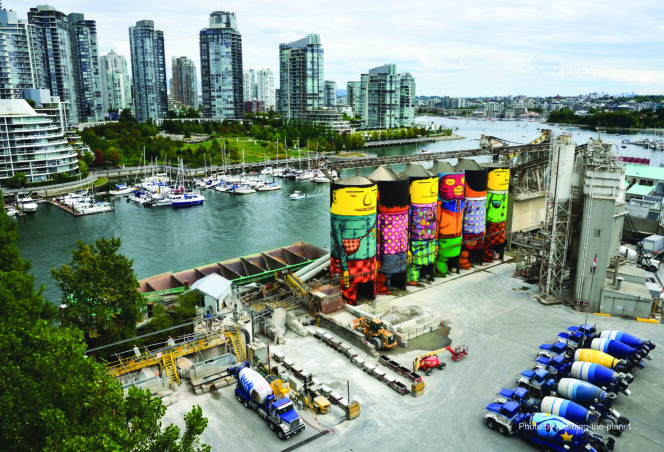 For each piece of public art, Vancouver Biennale has to talk with the city to see where they have available space that’s suitable for the dimensions and requirements of a given piece. “It’s about reflecting the space. If it’s really tall, you can’t have it in some smaller areas since it will block people’s view and people’s transit around there,” says Smaller, adding, “Where it sits is one thing, but you also have to transport it in. So, if it’s in the middle of some area but you can’t get the big truck and the crane in there, it’s going to be a no go.” For example, over the course of a day, it took cranes, flatbed trucks, and a dozen workers to deinstall Trans Am Totem for refurbishment. 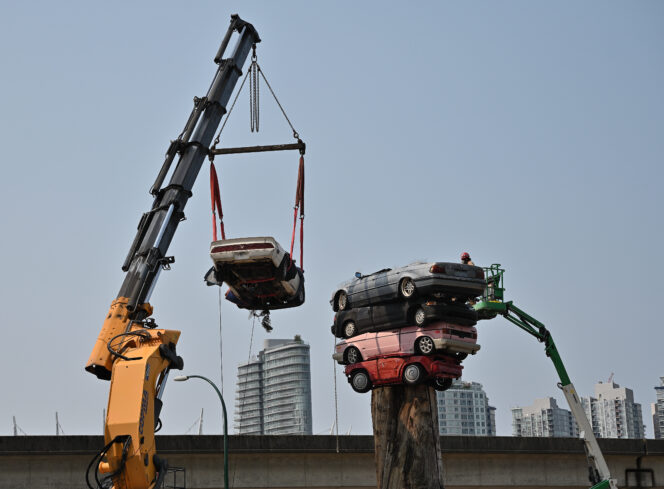 Part of the approval process involves extensive public consultation. Like any art, the pieces that Vancouver Biennale’s selects invoke a range of reactions from people, who sometimes have strong opinions about everything from the material they’re made of, to the overall aesthetics of the piece. “Their opinions matter and have to be taken into consideration,” says Smaller.

Some people are concerned about costs, whereas in reality, the Vancouver Biennale, and not the City of Vancouver, covers all expenses related to the public artwork. In addition, the artwork only remains for the two years of a given exhibition. At the end of a given Biennale, the pieces are either sold to buyers around the world, with the revenue going towards future public art; or, individuals like Chip and Shannon Wilson make donations to keep the artwork in Vancouver, as they did with A-maze-ing Laughter and TransAm Totem. The Walking Figures at Cambie and Broadway by Polish artist Magdalena Abakanowicz are part of a larger collection, many of which have been sold to international collectors. Unless a donor materializes, the remaining figures will not remain at that location for much longer.

The limited time frame of the Vancouver Biennale’s exhibitions means that’s important to get out there and enjoy the works before they go elsewhere. For the 2018-2020 Vancouver Biennale, extended into 2021 due to the pandemic, the theme is “re-IMAGE-n,” inviting the organization to expand the definition of public space into the virtual. Due to COVID-19, people have been turning to online platforms in order to forge community and interact with one another.

Voxel Bridge is the exciting culmination of this reimagining. Columbian-born artist Jessica Angel completed two artistic residences with the Vancouver Biennale. Out of it emerged a public art installation that combines the largest outdoor vinyl mural in the world (19000 sq. ft.) with blockchain-based augmented reality (AR). The mural itself is located on the underside of the south side of the Cambie Street bridge. The mural alone, with its strong geometric lines and bright colours, is already engaging but Voxel Bridge takes the mural to the next dimension with an overlaid virtual experience. 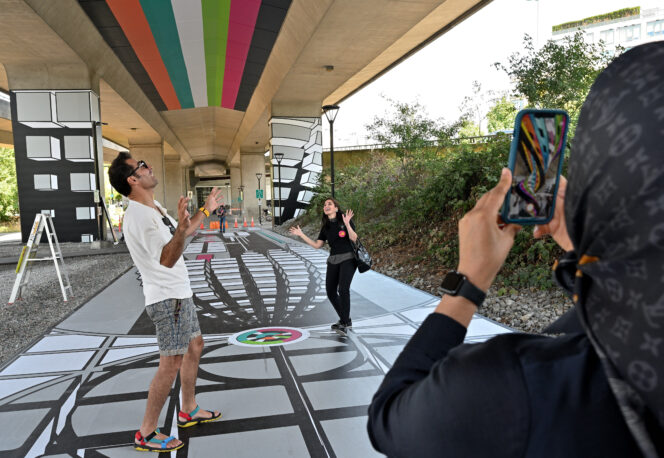 Basically, you download the Vancouver Biennale app designed by Spheroid Universe, and suddenly you have access to AR via blockchain technology on the Kusama network. “We are using public space that is not well used – it’s underneath a bridge, it’s concrete – and using art, we transformed it,” says Smaller. Through twenty animations, visitors can learn more about the history of blockchain technology, a type of digital database that will become more common in years to come.

Smaller is incredibly grateful to be part of the Vancouver Biennale’s innovative efforts to bring art to more people in the city. “I see public art as making us more of a multicultural and world class city for art, like Chicago, like London. When we started, there really wasn’t anything; there was just the odd statue. It’s exciting to be behind the scenes,” says Smaller. She loves being able to take in art in public, and invites more people to discover the many engaging and visually striking art installations located around Vancouver.

More info about the Vancouver Biennale can be found here.