How To Try E-Biking In Vancouver

Feel the wind in your hair and the sun on your face  while you explore the city on two wheels… but with less effort. E-bikes have exploded in popularity over the last few years since they make cycling easy and accessible. There are lots of places to try e-biking in Vancouver by renting an e-bike or taking an e-bike tour.

Until further notice, in line with the public health order, non-essential travel into, within, and out of BC is not recommended. BC residents, let’s do our part by continuing to stay small and support local with your immediate household, in accordance with the latest guidelines.

If you aren’t familiar, e-bikes are regular bicycles that have been fitted with an electric motor and a battery. You still have to pedal, but the motor makes it way easier. That means that you will expend less energy on an e-bike compared to a conventional bike. You can also go a bit faster, but you will still get some exercise.

Where to Rent an E-Bike in Vancouver

Several Vancouver rental shops offer e-bikes as part of their fleet. Rent an e-bike from Cycle BC just off Main Street, then ride it along the False Creek seawall. If you want to ride the Stanley Park or Coal Harbour seawalls, Cycle City and Yes Cycles both rent e-bikes downtown. 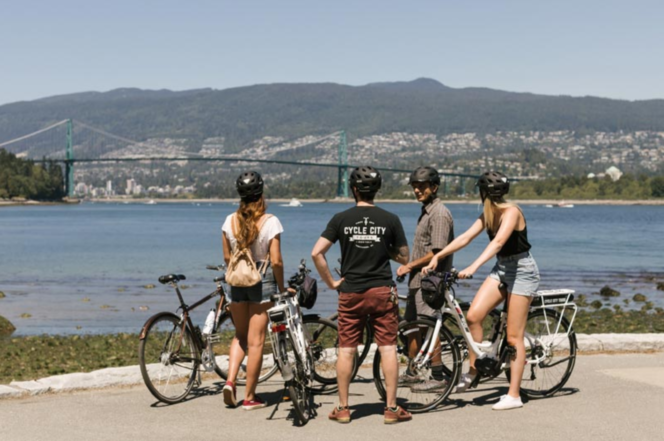 One of the best ways to experience the city and try out an e-bike at the same time is to take a tour.

Cycle City’s Epic Electric tour takes in Stanley Park, Yaletown, and Olympic Village, and more. You can also upgrade to an e-bike on their other tours including their fun Night Bike Tour.

Downtown-based Yes Cycles offers a few different e-bike tours. Bike over the Lions Gate Bridge and enjoy Ambleside Park and the Lonsdale Quay on their Vancouver North Shore E-Bike tour. Or take your e-bike onto the ferry and explore local food in Gibsons on the BC Food Adventure on the Sunshine Coast (after travel restrictions ease of course). 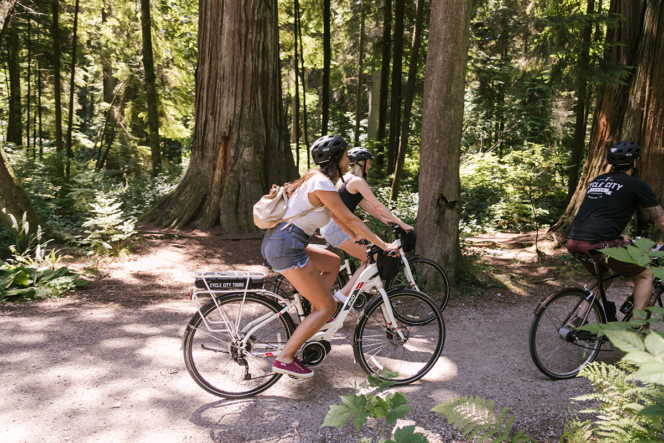