When Vancouver Mural Festival (VMF) launched in 2016, it had an ambitious dream to reimagine the city landscape. Six years later, it continues to transform Vancouver, one mural at a time.

“Our mission is to create meaningful experiences that connect art and people,” says Andrea Curtis, Executive Director of VMF, a non-profit organization. To date, over 300 murals have been commissioned and painted across Vancouver, fundamentally altering how people in the city view art, culture, their neighbourhoods, and local history.

The VMF works with community groups and private clients year-round, as well as organizes VMF Winter Arts and the upcoming Vancouver Mural Festival. This year’s Festival takes place August 4 to 14, 2022, and involves over 30 new murals encompassing 8 neighbourhoods, in addition to a range of live events over the course of the 11 days. VMF has expanded its guided mural tours, covering Mount Pleasant, Strathcona, Cambie Village, the West End, Downtown, Marpole, and River District (tickets must be booked; there is no charge to join, although tips are encouraged). 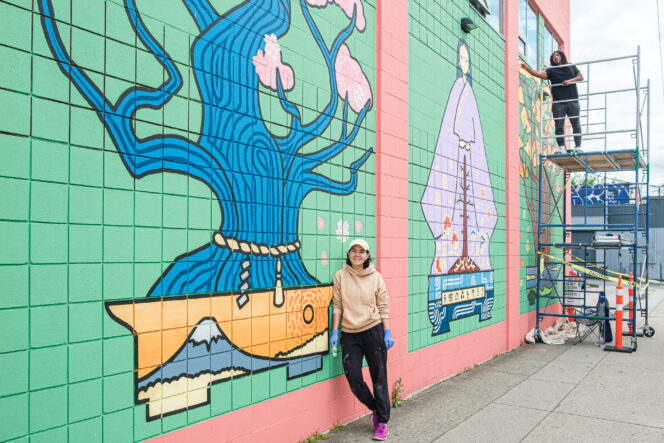 As Vancouver continues to see considerable urban planning and infrastructure change, VMF sees itself as cultivating a different kind of development. “What we’re trying to do is promote arts and culture not so much as an afterthought but as something that is representative and reflective of who we are,” Curtis says. She continues, “We always need an opportunity to see ourselves reflected in our society in a creative and vibrant way.”

Curtis sees a mural as so much more than a two-dimensional image on a wall. It’s a work that can tell the rich stories of a local place and community. She describes how murals leverage “the transformative power of art, particularly in public spaces” to effect change in any neighbourhood in which they’re installed. 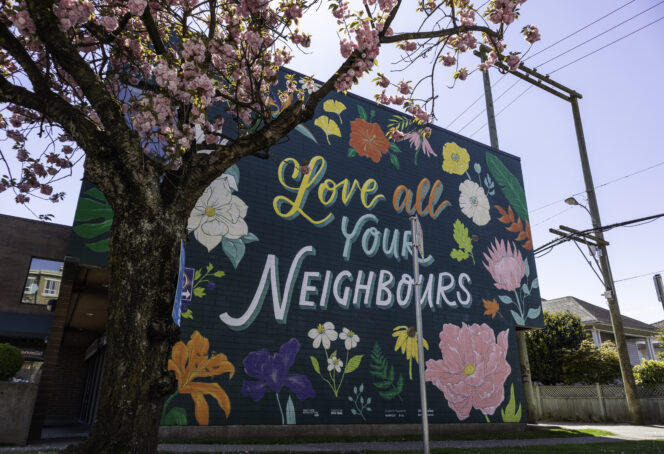 The recent full-wrap mural by artists Fiona Ackerman, KC Hall, and Joon Lee at City Centre Motel evidences how murals can bring new life to an overlooked space. In partnership with The Narrow Group and Nicola Wealth Real Estate, the VFM has turned City Centre Motel into a lively meeting point for art, culture, and community. 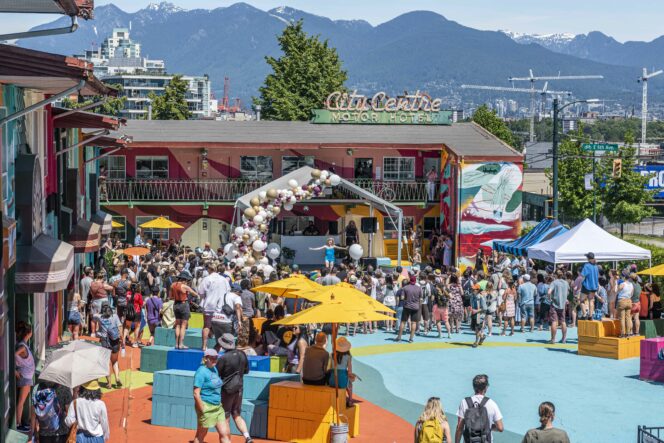 Each mural takes about three months to create, from initial ideation to final creation, and involves thoughtful collaboration between various stakeholders, including curators, artists, community groups, business associations, property owners, real estate developers, and government officials. In some cases, it can take considerable convincing of a property owner to finally get them on board when it comes to the vision VMF and an artist have for a particularly space.

For the Festival, the aim is to cover neighbourhoods throughout the city, with a minimum of 3 murals in each one. VMF curators strive for at least 50% female-identifying and a minimum of 50% BIPOC artists in order to give opportunities for artists traditionally marginalized. “We often surpass those goals. That’s not hard to do. There is so much incredible talent to select from,” Curtis says. VMF also prioritizes compensating artists well given the financial precarity of being a working artist in Vancouver.

VMF uses art to recognize and celebrate the traditional unceded territories of the xʷməθkʷəy̓əm (Musqueam), sḵwx̱wú7mesh (Squamish) and səlil̓wətaʔɬ/Selilwitulh (Tsleil-Waututh) Nations. In 2017, Debra Sparrow, a Musqueam weaver and graphic designer, contacted the VMF about increasing Indigenous artistic presence in the murals. “It kicked off such incredibly deep, transformative, and fruitful collaboration, conversations, and ongoing work under her leadership,” Curtis says. Sparrow has collaborated with VMF on Blanketing the City, a public art project bringing together the three local Nations in order to showcase Coast Salish weaving in a series of six murals, appearing in locations such as the pillars of the Burrard Street Bridge, the Raincity Transitional Housing Program, and Cathedral Square. 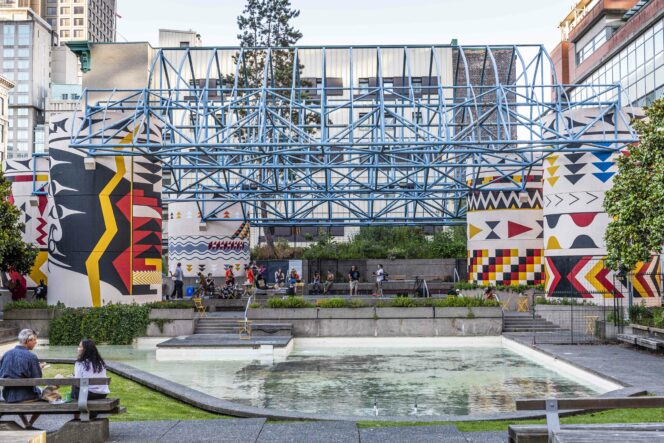 Sparrow invited master weavers Chief Janice George (sḵwxwú7mesh) and Angela George (səlilwətaɬ) to join the project and most recently Buddy Joseph (sḵwx̱wú7mesh) for the fifth mural, which will appear on a building on North Vancouver’s Burrard Pier. Joseph explains how the mural visually tells important stories of the Squamish people.

“It goes back to 1886. The story is that Vancouver had the Great Fire, and people in North Vancouver could see that, and they wanted to help. So, they got their canoes and paddled over there,” he says. The mural design uses geometric weaving patterns in order to depict the fire, an image of two paddlers in a canoe, as well as water and sky. The mural is intended to honour the vital role that the Squamish Nation played in rescuing people, as well as rebuilding the city.

Another wall depicts a pre-contact story of one of Joseph’s ancestors who was tasked with slaying a serpent and eventually learned how to kill it through a vision that came to him. Victorious, he took on the name of the serpent as well as claimed its skull, which brought great powers to him.

Chief George says that designing murals is faster and more fluid than the painstaking work of weaving. Coast Salish weaving is primarily geometric so she does enjoy being freer with the lines for murals. Nonetheless, the integrity of highlighting the craft of Coast Salish weaving remains paramount. “We want to make sure we keep that image of weaving alive and the importance of it, so that it’s always in the conversation,” Chief George says. Since many of the technical skills and cultural teachings connected to traditional weaving were lost due to colonialism, murals can help in revitalizing knowledge about Coast Salish weaving.

Sparrow, Angela George, Chief George, and Joseph are all teachers at heart, dedicated to educating the next generation in their respective Nations as well as the general public about their craft. Joseph envisions potentially having nearby QR codes so that visitors could connect to information about the murals, Coast Salish stories, and weaving practices.

“To be identified on our land is so important,” Chief George says. The “woven” murals therefore become a visual representation and affirmation of the sacred relationship—past, present, and future—that the three Nations have with the unceded land on which the murals are located.

As a result, a respect for place is a fundamental part of the many initiatives of the VMF. Each mural requires being attentive to the history of a given neighbourhood and to the unique character of its community. For example, in 2021, VMF began a West End Laneway Series subsequent to Vancouver City Council naming eight laneways after historic local individuals. Initially, they commissioned murals for See-em-ia Lane (artist Jody Broomfield) and Pantages Lane (artist Rory Doyle). This year, they’re adding murals to three additional laneways: Rosemary Brown Lane by artist Sade Alexis, Ted Northe Lane by artist Matt Hanns Schroeter, and Jepson-Young Lane by artist Kirk Gower. 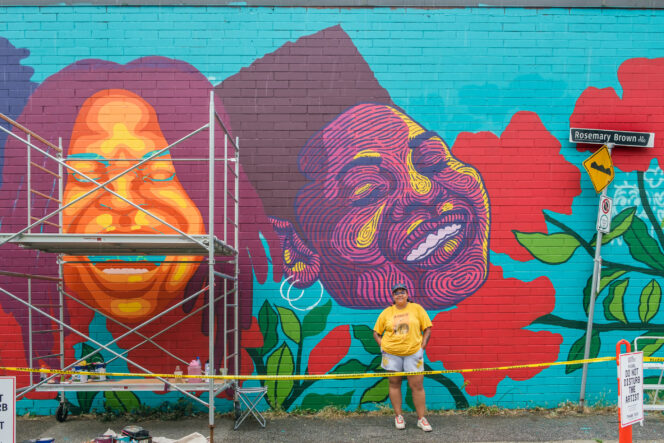 Gower, who is a visual artist whose work represents queer identity and bodies through portraiture and other imagery, was deeply honoured to be selected to create a mural in honour of Dr. Peter Jepson-Young. Diagnosed with AIDS, Dr. Peter devoted himself to educating people about HIV and AIDS, created the TV series Dr. Peter Diaries, and founded the Dr. Peter AIDS Foundation. “To honour the work that he did and the legacy that continues from that work was extremely humbling. I felt a lot of pride within it,” Gower says.

Gower felt the weight of doing justice to such a revolutionary figure, eventually deciding against a visual portrait of Dr. Peter in favour of a more abstract, yet emotive tribute. “I didn’t want it to feel like a memorial. I wanted it to feel like an extension or a representation of his work and legacy,” he says.

The mural Gower designed features two hands reaching for one another. One hand is more of a photographic rendering, while the other is a silhouette, which contains four types of flowers, including a rose and a poppy. A red ribbon—the symbol for awareness and support for those living with AIDS—is wrapped around both hands, connecting them. “It’s meant to represent his work abstractly and meant to represent compassionate care for others,” Gower says. 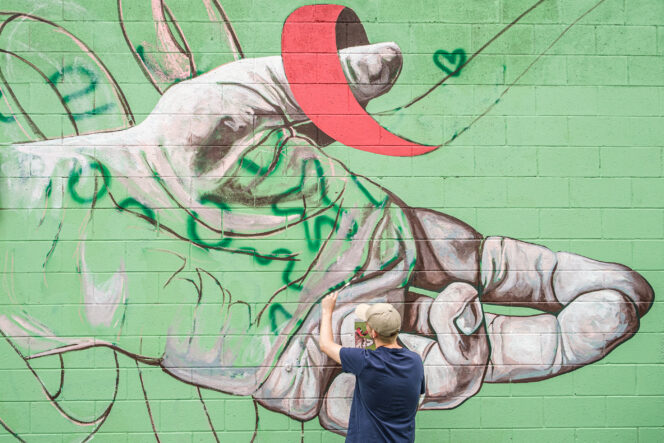 Gower gained a deep appreciation for the West End as he worked on the mural. Community members stopped by to chat with him, and some people even brought him coffee. “I’ve never fully understood the word ‘community’ until now. Everyone is so inclusive and lovely,” he says. “I’ve never felt so welcomed in my life,” he continues.

The switch from portraits to a mural was a bit of a challenge. Gower had to shift from the fine detail he’s used to painting to bigger, more gestural strokes. However, Gower loved the process and is deeply grateful for the opportunity. He hopes the mural will speak to the people within the area. “I wanted people to view it as something that directly impacts the community. What I’m starting to really realize is that this community supports each other,” he says. It was important to him that the mural captures the level of care that exists in the West End.

Ultimately, each of the over 30 new murals and the hundreds of murals painted over the last six years tells a story of its Vancouver locality and the diverse people that make it so vibrant.

More information about the Vancouver Mural Festival, its events and tours, as well the murals can be found on the website. There’s also an app, which is a handy tool for locating murals around the city.