Over the course of more than forty years, Vancouver’s Pride Parade has seen considerable and exciting evolution. This year’s Pride Parade takes place July 31, with a diverse line-up of Pride Week events that run from July 21 to August 1.

Vancouver’s Pride Parade initially started as a protest and has since expanded to become an inclusive celebration of the 2SLGBTQAI+ communities. Michelle Fortin, Chair of the Board of Directors of the Vancouver Pride Society (VPS), says the first Pride Parade was very much about being visible and proud. “It was about taking up space. It was about recognizing and leaning into the fact that back in 1969 gay sex had been decriminalized. It was about taking over the streets and being present—saying to the straight majority that we weren’t going anywhere,” she says. 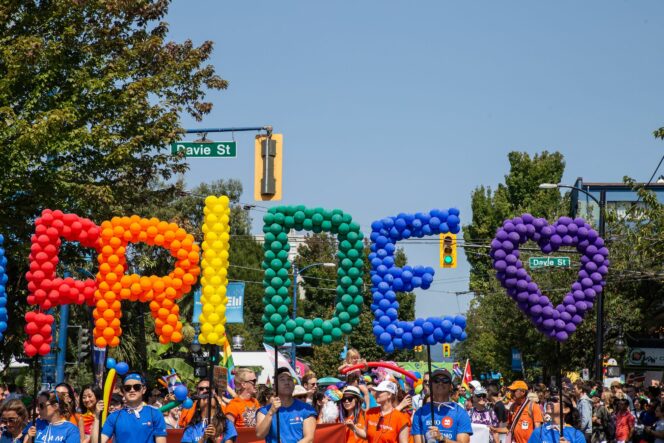 The VPS is a not-for-profit that organizes events that champion the 2SLGBTQAI+ communities in the city. While initially the initiatives of VPS and QMUNITY, a resource centre for queer, trans, and Two-Spirit individuals, were under the same umbrella, they separated about thirty years ago. That way, they could specialize in their respective skillsets: event-organizing for VPS and social services and advocacy for QMUNITY.

And while for decades the Pride Parade served a very important purpose for protesting and claiming space, it didn’t reflect the diversity of the 2SLGBTQAI+ communities. Even the VPS had to undergo an evolution in order to become more intersectional. “In the last decade, there’s been a real recognition and intentional move to creating a safer space for more diverse folks—queer, trans, Indigenous, and racialized folks—to feel safe enough to join the board and the staff team at Vancouver Pride,” Fortin says. She is proud to now say that the VPS is a much more diverse and representative organization. 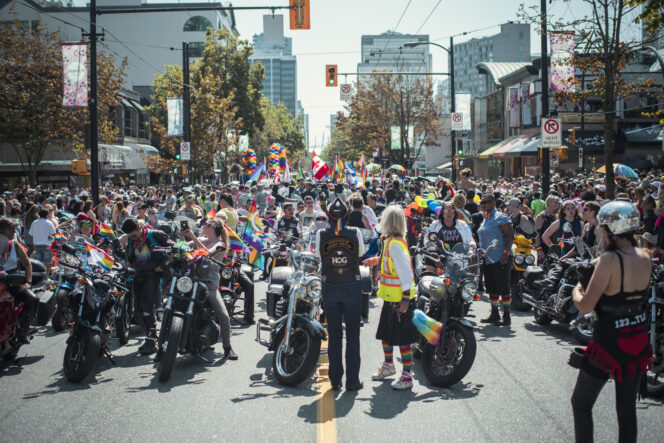 The VPS has also done a lot of community engagement, seeking out feedback and listening hard in order to find out how the VPS, Pride events, and the Pride Parade can be more welcoming for everyone. A lot of that feedback is positive but at the same time, Fortin says the VPS is also very open to hearing what could make Pride better. “It’s really important to hear how people have experienced Pride in a negative way,” Fortin says.

VPS is currently focusing on decentering Whiteness and decolonizing Pride in Vancouver so that racialized and Indigenous communities feel a sense of belonging as well. “For us, the most work is mending relationship with Indigenous, racialized, and trans communities—those folks that had a bad experience in the last decade [at Pride],” she says. Fortin is hopeful that, with recent changes, members of these communities will give Pride another chance. 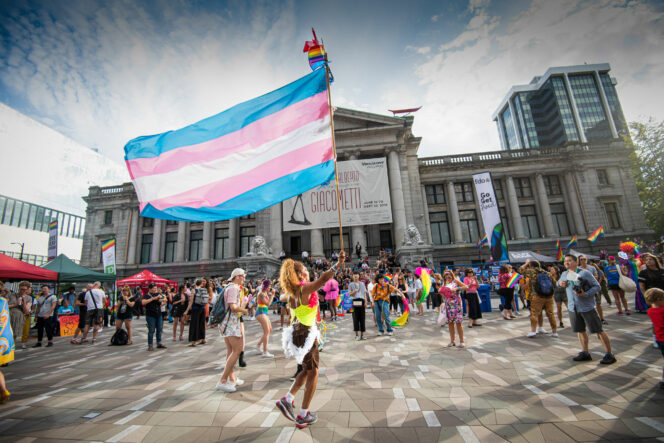 Members of previously marginalized communities are now active participants and contributors to the Parade and to the various events during Pride Week. For instance, for the Sunset Beach Festival, BIPOC involvement was prioritized. The Community Stage is curated by RiceCake, the Stoli Stage by Normie Corp, and the TD Main Stage by Hotlatch—ensuring diverse representation at both the planning and performing level. “We have really worked hard to listen to the community, to work with racialized folks and Indigenous folks, and to basically say, ‘We have this venue, and here is the budget. Run with it,” she says.

The theme for this year’s festival is Together Again, highlighting the return to in-person activities and the community-focus of the events. In addition to the popular Sunset Beach Festival, there will be a number of other venues, including the Rainbow Lounge at Ocean Art Works Pavilion on Granville Island, the Vizzy Forest Lounge at 1100 Bute Street, and the Pride Neighbourhood Patio at Bentall Centre Plaza at 505 Burrard Street. Locations like the one on Granville Island represent a broadening of the Pride festival beyond the downtown core in order to encompass even more of the city. 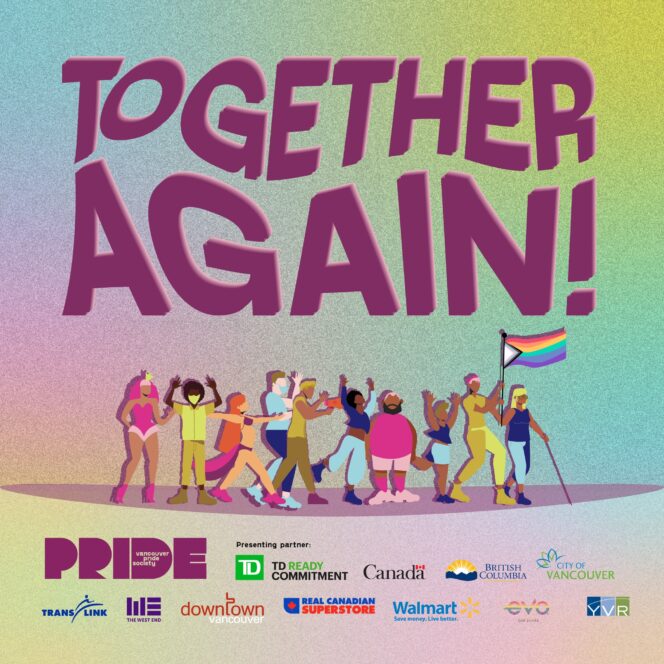 Some exciting programming highlights include AfroQueer and LevelUp at the Vizzy Forest Lounge on July 29, AfroQueer Pride Sunday at Beaumont Studios on July 31, a virtual Queer History Panel on July 26, and an Aces and Aros event at Ocean Art Works Pavilion on July 29. The latter event emerged from feedback encouraging the VPS to make space for those who identify as asexual and/or aromantic. “[The event] is inclusive of everyone, but it is centering folks that identify as asexual,” says Fortin. 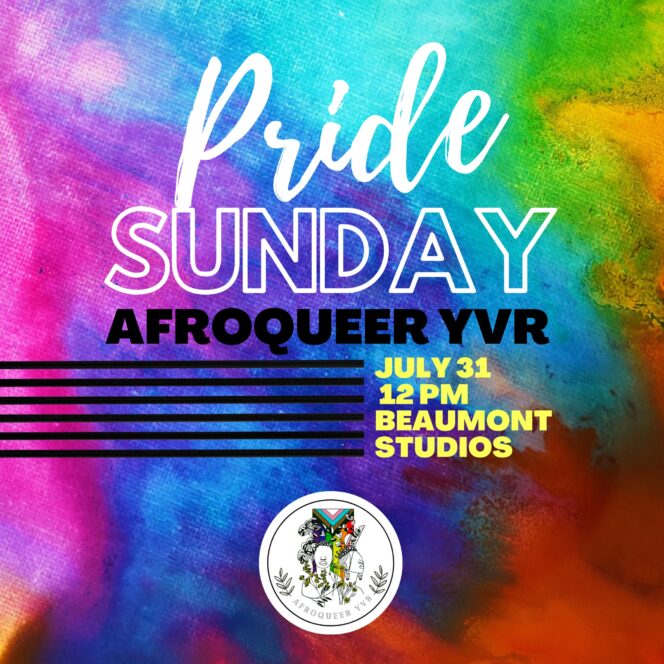 The VPS have removed entry fees for some of the events in order to make the festival more accessible and family-friendly. “Accessibility includes having money in your pocket. We wanted things to be more accessible, so they are free or lower cost,” she says.

This year, all three host nations—the xʷməθkʷəy̓əm (Musqueam), Sḵwx̱wú7mesh Úxwumixw (Squamish), and Tsleil-Waututh First Nations—will be participating in the Pride Parade, as well as actively providing input and feedback for the events. The TD Main Stage of the Sunset Beach Festival features artists like Animal Kingdom, a queer Indigenous DJ. Kristen Rivers (tiyaltelut), from the Squamish National Council, will be one of the Grand Marshals of the Pride Parade, along with Annie Ohana, a community activist and educator, and Emperor Victor the Victorious and Empress Fancy Pants from the Dogwood Monarchist Society. 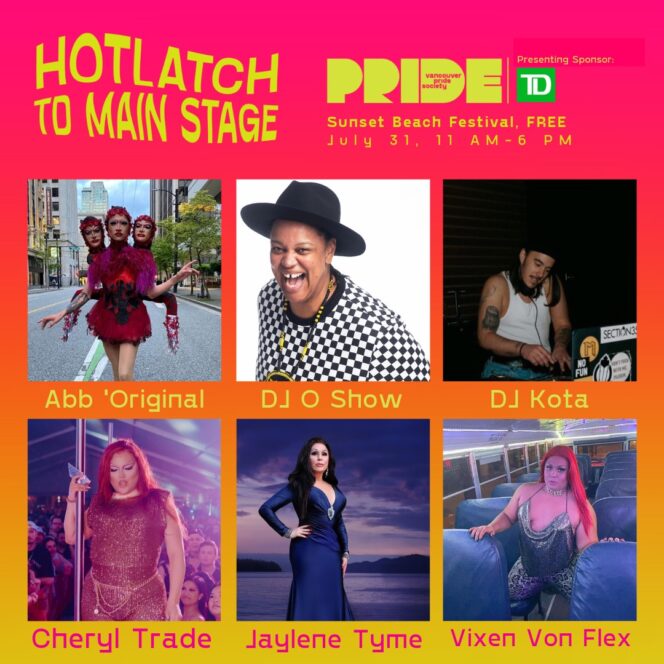 The programming for the 2022 Pride Week events and Pride Parade evidences the VPS’s commitment to reconciliation and diversity, especially given Vancouver’s exciting hosting of Canada Pride in 2024. “This is really a reflection of us embracing, recognizing, and honouring the deep Indigenous history of these lands that have been colonized, but as well as of all the settlers that have arrived to these shores from everywhere—not just from Europe,” she says.

Fortin is really looking forward to this year’s Pride Week and Pride Parade. She sees Vancouver’s Pride Parade as distinct in many different ways. “I think one of the things that makes us unique is that we are on a long weekend: it’s BC Day Long Weekend. We have civic event status, so the City is a partner in this. We’re really thinking about the 2SLGBTQAI+ community but the broader community as well,” she says. 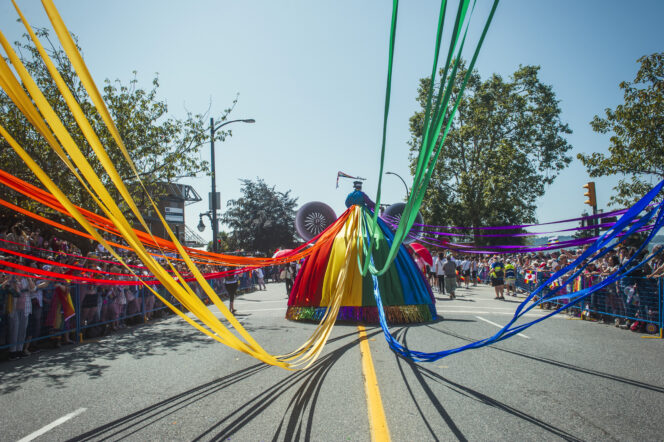 One interesting change this year is that political parties will have to march together in the parade in order to remove the partisan element to their participation. Instead, VPS wants to make the event about solidarity—and about the 2SLGBTQAI+ communities.

In addition to all the official Pride Week events, other organizations and establishments will be offering events celebrating the 2SLGBTQAI+ communities. For example, Parq Vancouver is hosting a D/6 Drag Night on July 29 and a Drag Brunch at Honey Salt on July 30, and China Doll is hosting a Pride in Chinatown Dim Sum Brunch on July 24.

Fortin is counting down the days until the Pride Parade takes place on July 31 and invites everyone to attend. “I love the parade. People are just so positive. I love doing chants with people, and call and responses. I love seeing families who aren’t queer showing up with their kids. It’s heartwarming,” she says.

5 Highlights of the 2022 Vancouver Pride Week 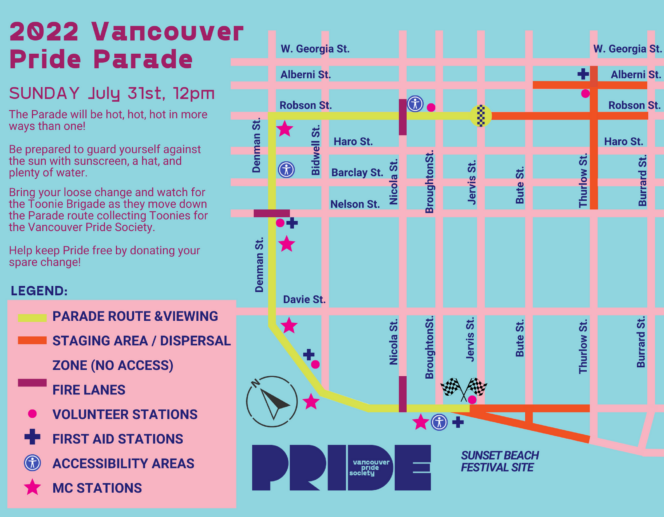 The annual Pride Parade takes place on July 31, 2022, from noon to 3pm. The Parade runs along Robson Street, Denman Street, and Beach Avenue, ending at Sunset Beach. Get there early to snag a prime viewing spot, bring water to stay cool, and get ready to cheer as well as donate toonies in support of the VPS. You can buy tickets to the Parade Viewing Party at CRAFT Beer Market.

The popular Sunset Beach Festival returns on July 31, 2022, from 11am to 6pm. There will be local artisan vendors, a beer garden, as well as food and non-alcoholic drinks for purchase. As well, you can wander around and check out the three stages: the Community Stage curated by RiceCake, the Stoli Stage curated by Normie Corp, and the TD Main Stage curated by Hotlatch. Performers include Flaming Wok, Edzi’u, and Jas Minh.

3. Aces and Aros at the Rainbow Lounge

Visit the Rainbow Lounge at Ocean Art Works Pavilion on Granville Island on July 29, 2022, from 5pm to 9pm for a special Aces and Aros event. There will be snacks, speed-friending, bingo, games, door prizes, and more at this free event. While this event is for those who identify as asexual and/or aromantic, everyone is welcome.

4. AfroQueer and LevelUp at the Vizzy Forest Lounge 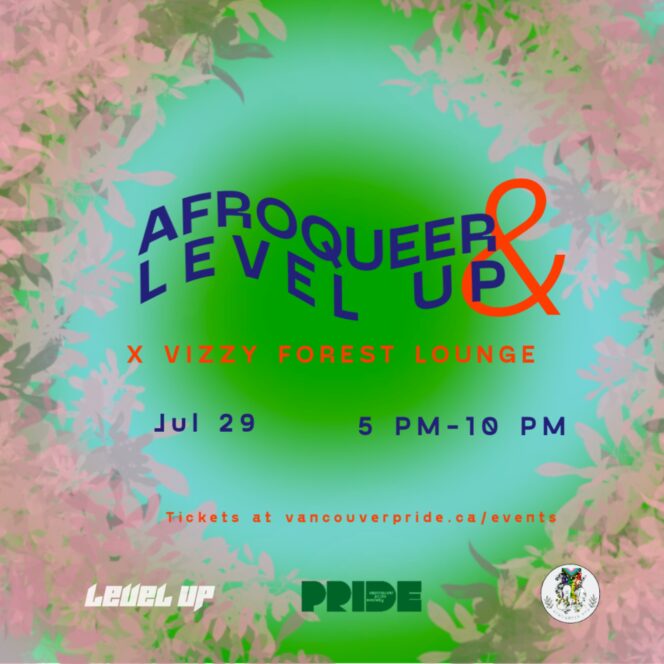 AfroQueer, a Black-run and Black-centric collective, and LevelUp, a QTBIPOC-centred hip hop dance party organizer, are hosting an event at the Vizzy Forest Lounge in the Davie Village on July 29 from 5pm to 10pm. Expect a fun night of drag and music at this street party.

5. Vancouver Gaymers at the Rainbow Lounge

Vancouver Gaymers are taking over the Rainbow Lounge on Granville Island on July 31, 2022, from 3pm to 8pm after the Pride Parade. There will be games, a Pride Smash Tournament, and a surprise musical guest to close the evening.