Vancouver Area Attractions For Train Buffs Of All Ages

As the terminus of the first railway across Canada, Vancouver wouldn’t be the city it is today without trains. Today the city is home to several railway attractions that will appeal to train buffs of all ages.

Head to the Roundhouse Community Centre in Yaletown to learn about Vancouver’s railway history. Today the centre hosts events and community programs, but the historic building was built to service steam locomotives. You can still see the original railway turntable in the outdoor plaza. Inside, visit Engine 374, the locomotive that pulled the first passenger train to arrive in Vancouver in 1887. Volunteers are often on site to provide tours and answer questions.

Vancouver’s rapid transit system is known as SkyTrain since the first line runs primarily on elevated tracks. This ensures that riders get a great view as the trains cruise above the city. The system opened in 1986 with the Expo Line. Today it includes three lines: Expo, Millenium, and Canada. Don’t miss a ride across the SkyBridge on the Expo Line. It’s the world’s second-longest cable-supported transit-only bridge and takes riders across the Fraser River. 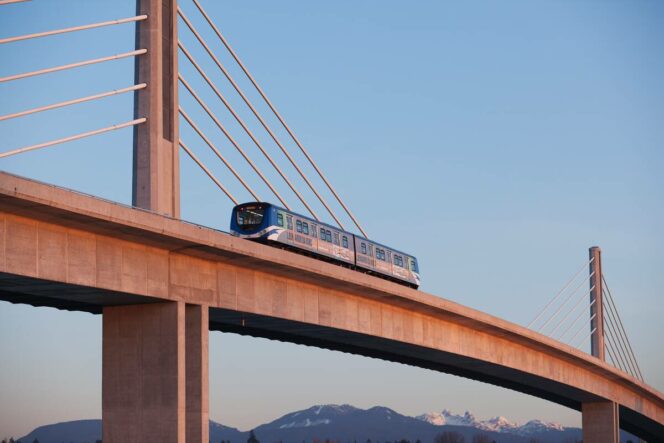 A 20 gauge, two-kilometre-long track runs through the heart of Stanley Park. The Urban Forest Train runs in the summer months and includes fun facts about resident wildlife and Stanley Park history. Visit at Christmas, Halloween, and Easter to see the train and surrounding area festooned with festive decor.

This 1/8 scale, ride-on miniature railway is popular with families. The two-mile track takes you into the forest, across bridges, and through tunnels. Volunteers from the BC Society of Model Engineers built the railway and operate it today. Their rolling stock includes four hand-crafted steam engines, three battery-powered miniature electric and diesel locomotives, and about 30 passenger cars.

The miniature railway at Surrey’s Bear Creek Park has been delighting riders of all ages since 1996. The train is led by Eddy the Engine, a mining diesel engine imported from England. The ride on a 15″ gauge track goes past Bear Creek Gardens, over a bridge, and through a tunnel.

Ride a fully-restored interurban train from Cloverdale Station to Sullivan Station and back. The hour-long ride includes a tour guide to explain the history of the railway. You can also take a tour of the Discovery Centre to learn about the history of the interurban trains that ran from Vancouver to Chilliwack. There is even a simulator that lets you experience what it was like to operate the train.

This huge 10-acre museum includes gold panning, historical exhibits, and an interactive show. But for train buffs, the real attraction is the underground tour. You will climb aboard a mine train and head underground to experience what life was like for miners nearly 100 years ago.

This 12-acre museum in Squamish is home to the largest collection of railway rolling stock in Western Canada. The main attraction is the Royal Hudson 2860 steam locomotive but you can also explore rolling stock from Canadian Pacific, Canadian National, Pacific Great Eastern, and BC Rail. A mini railway, speeder car, and full-sized trains are all available for rides. The town centre area includes a functioning print shop and blacksmith shop as well as a fire hall.

Roe Overturned: What You Need To Know About The Supreme Court Abortion Decision

10 Canadian Foods You Must Try In Vancouver