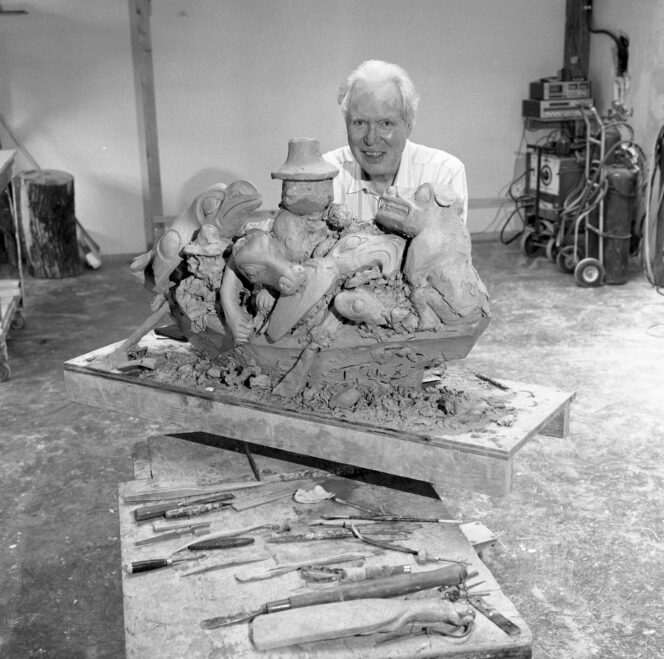 In 2008, the Bill Reid Gallery of Northwest Coast Art was launched to celebrate the work and continue the legacy of Bill Reid, an iconic and master goldsmith, sculptor, and carver, in addition to broadcaster, writer, and activist. “His influence and his ongoing inspiration for young emerging artists today is very special,” says Curator Beth Carter.

Reid, who lived from 1920 to 1998, was one of the most famous Indigenous artists of his time. His mother was Haida and his father American with Scottish German Roots. Reid, who began connecting with his Haida heritage at age 23, learned traditional Haida art forms through self-study as well as seeking out people who could teach him techniques. Reid is a fitting tribute for the Gallery because he melded a traditional and a modernist aesthetic. “He was very contemporary. For us to continue celebrating contemporary art of the Northwest Coast makes perfect sense in his name,” Carter says. 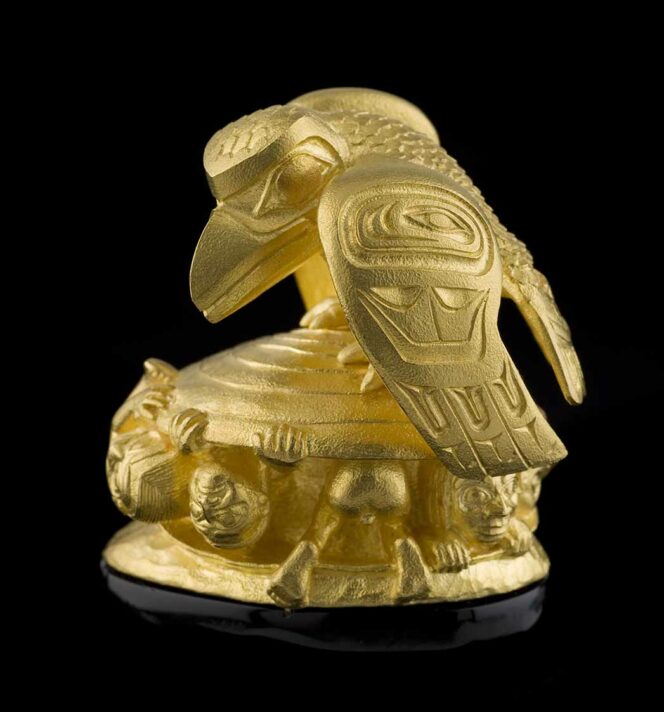 The Bill Reid Gallery is a jewel of a space in the heart of downtown, on the unceded and ancestral territories of the xʷməθkʷəy̓əm (Musqueam), Sḵwx̱wú7mesh (Squamish), and səlilwətaɬ (Tsleil-Waututh). It’s the only non-profit gallery that is entirely focused on contemporary Indigenous art from the Northwest Coast. “The work that we do is a great chance for people to come in and get a sampling of our art from various regions of the coast,” Carter says.

The Gallery always has a permanent exhibition devoted to Bill Reid’s work. As well, they offer 4 to 6 temporary exhibitions a year, each led by an Indigenous guest curator, either on their main gallery floor or their recently opened smaller mezzanine gallery. A advisory committee, which is made up of Indigenous artists and cultural leaders, is involved in the collective decision making-process when it comes to the exhibitions.

These exhibitions often feature a group of artists and/or centre on contemporary issues and the unique ways Northwest Coast artists are responding to them. For example, in 2019, the Gallery held an exhibition called qaʔ yəxʷ – water honours us: womxn and waterways, which was guest curated by ReMatriate Collective and featured the work of artists such as Alison Marks (Tlingit), Krystle Coughlin (Selkirk), and Carrielynn Victor (Sto:lo). “There were lots of symbolic connections to water: the role of water for survival and for nourishing, and also how our bodies are made of water, birthing through water, and water as a healing substance for many Indigenous groups,” Carter says.

Running until June 5, Sho Sho Esquiro: Doctrine of Discovery, guest curated by Miranda Belarde-Lewis, spotlights the creations of fashion designer, textile artist, and activist Sho Sho Esquiro. The title of the exhibition refers to a Papal decree that in 1493 falsely allowed Europeans to claim land and water they supposedly “discovered,” completing ignoring those already there. The exhibition, through beautifully striking gowns and outfits, explores continuing impacts of colonialism on First Nations communities, as well as both resilience and resistance to oppression. “This is a powerful exhibition that is really resonating with a lot of people,” says Carter. 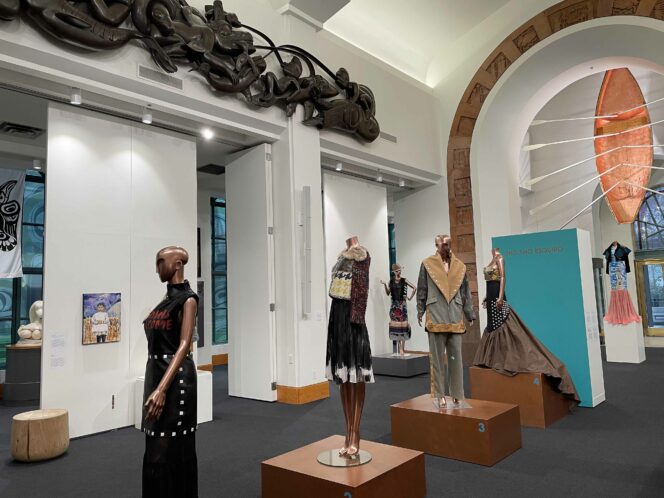 Visitors to the Gallery still have time to catch Weaving the Future, a mezzanine exhibition, which closes on January 30. Because Bill Reid was such a pivotal influence for so many artists, mentorship and collaboration figure strongly in much of the curation at the Gallery. This exhibition, guest curated by Chief Janice George, showcases the work of three Coast Salish weavers—Debra Sparrow (Musqueam), Angela George (Tsleil-Waututh) and Janice George (Squamish)—and their students, Aleen Sparrow (Musqueam), Deanna George (Tsleil-Waututh) and Anita Tetreau (Squamish). The exhibition underlines the value of traditional knowledge and the role of mentorship in passing this knowledge onto emerging innovative Coast Salish artists. 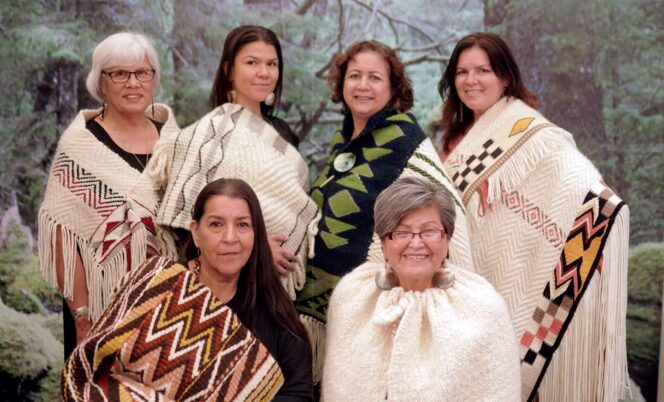 “With just about every exhibition we do, because of the nature of Indigenous art, we’re looking to the future but we’re also looking to the past. We’re always rooting the exhibition in place and historic times because so much of what contemporary artists are speaking about is also related to that,” Carter says.

Two upcoming mezzanine exhibitions will allow for appreciation of other mediums that contemporary artists are using to express themselves. The first will run from February to May and will take its inspiration from Bill Reid’s famous quote “Joy is a well-made object, equalled only by the joy of making it.” Carter explains how, for Reid, when something was well-made, it went beyond just the creation itself. “He aspired in all his work to do the very best quality but he also wanted it to resonate with meaning and with authentic connection to the community,” she says.

The Well-Made Object will draw from the Gallery’s permanent collection, and include works by Robert Davidson, weaver Meghann O’Brien, textile artist Dorothy Grant, and printmaker Marika Echachis Swan. Then, from May to October, the mezzanine will feature the first exhibition of Assistant Curator Aliya Boubard entitled Beaded Nostalgia, which will explore flourishing contemporary beadwork artists.

A focus on the next generation was officialised through the Chief 7idansuu James Hart Emerging Artist Program. Chief James Hart is the Gallery’s Honourary Patron: “Bill was one of his main mentors, so he learned and gained so much from Bill. This idea of passing it on to the next generation is so important to him,” Carter says. The Program prioritizes ways to involve young artists in the Gallery whether it’s through exhibitions, front-of-house responsibilties, or behind-the-scenes work like curation.

Carter feels that there is growing interest in engaging with contemporary Indigenous art, compared to when Bill Reid had to pave the way. While achieving success and making a living are always challenging for artists, contemporary Indigenous artists are finding a venue for their work and their messages. “I see our young artists having quite a lot of success if they’re willing to work for it,” says Carter. 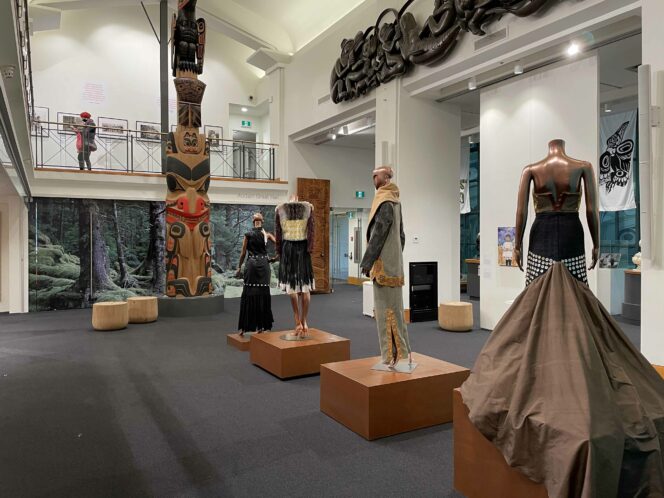 She invites everyone to come to the Gallery to discover and learn more about contemporary Northwest Coast artists. The Gallery also has rich supplementary programing, including regular (online) workshops as well as artist talks and panel discussions. “I think we’re a little bit of a hidden treasure,” Carter says. With its many exhibitions, fostering of emerging talent, and educational offerings, the Gallery is very much honouring Bill Reid’s rich legacy.

Viola Davis, Recipient Of The 2022 Women In Motion Award: “I want My Ceiling To Be Someone Else’s Floor”