Willian Chen, executive chef of A.Bento, looks forward to Lunar New Year on February 1 and the festivities and eating it will bring. “It means a brand new year starts, so everyone gathers together to celebrate and to eat together,” he says.

Growing up in Kaohsiung, Taiwan, Chen met with his family on the eve of Lunar New Year. While the food was being prepared, he and other family members watched TV and caught up. “Most people will eat hot pot with a big table and a big pot in the middle,” he says. He says the round shape of the pot and the table are symbolic of the unity of huān jù, which means to come together socially. “It’s a very warm gathering for everyone to welcome the new year,” Chen says.

Then, on New Year’s Day, Chen visited relatives and received red envelopes. “That’s pretty much the most fun part for kids,” he says.

Now, in Vancouver as the executive chef of A.Bento, Chen wants to share the spirit and symbolism of Lunar New Year with multiple Tiger Gift Boxes (now available for pre-order for pick-up or delivery January 18 to February 1). Tiger Gift Box C (feeds 4 to 6 people, $128) consists of four courses that come vacuum-packed. They just need to be reheated in simmering water for 10 to 20 minutes—and you’re ready for celebrating.

Chen designed the menu to showcase Taiwanese cuisine, keeping the symbolism of the food items in mind as well. He explains that many dishes play on the sounds of words that connect with words associated with good fortune. A highlight of the meal is the spicy bean paste braised whole fish, which represents prosperity and wealth. “Fish is one of the significant dishes for Chinese New Year but you have to cook the whole fish; you can’t cut it up. And then, you can’t finish the fish. If you have leftovers, that means every year you will have leftover fortune,” Chen says. 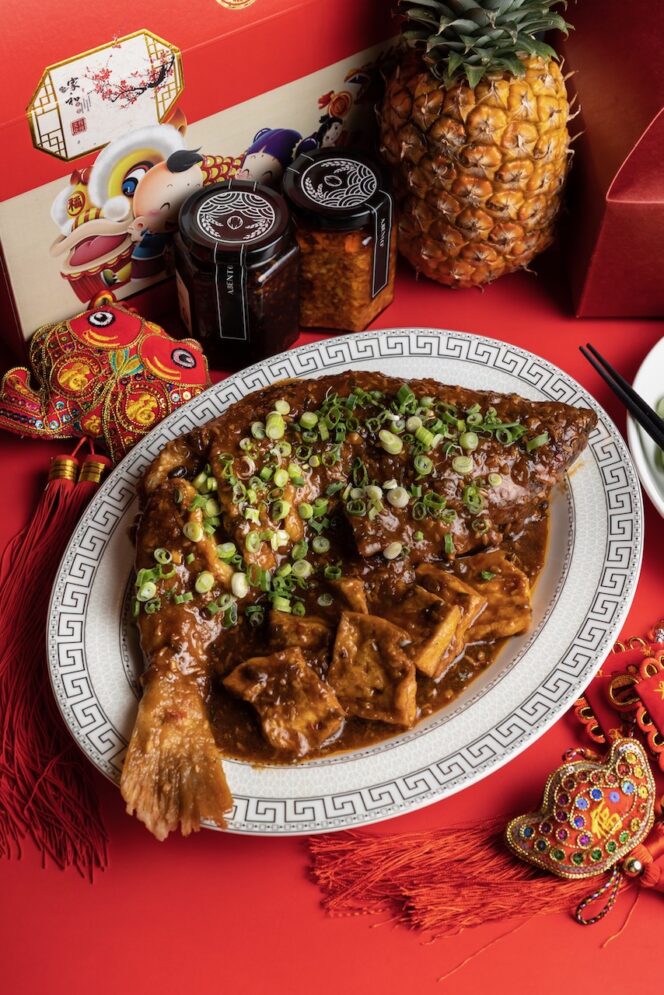 Customers can also pre-order two other Tiger Gift Boxes ($68 or $168 for one of these boxes and the four-course meal): one with four house-made sauces, such as XO sauce and pineapple spicy sauce; and the other featuring two sauces in addition to koi candy and snowflake crisps from ButterMere. 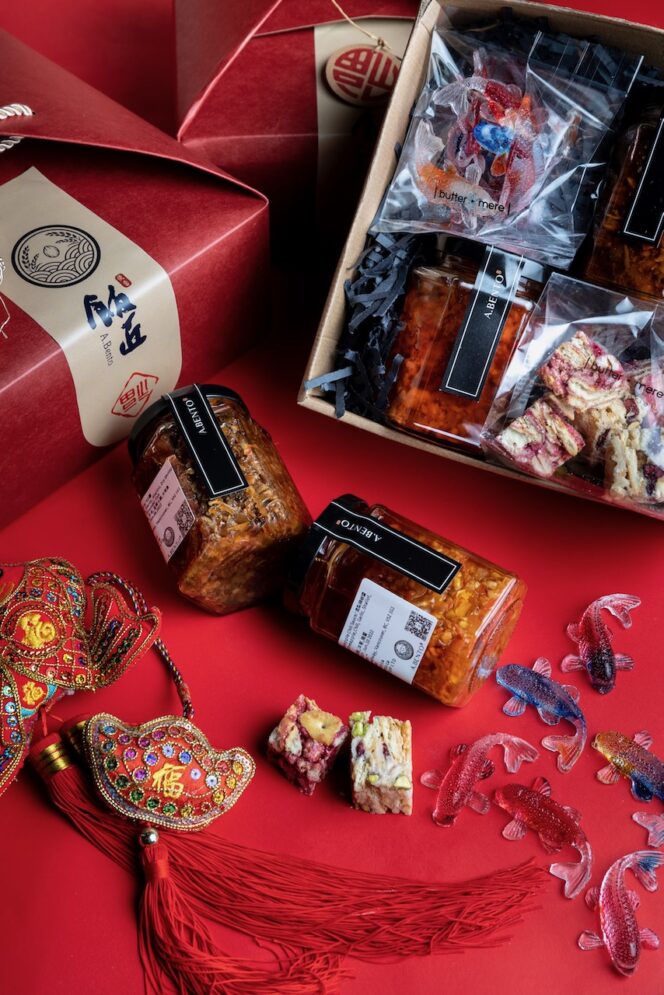 Justin Cheung, executive chef of Potluck Hawker Eatery, is also offering a special Lunar New Year menu. Cheung’s cooking for the celebration evidences his hybrid cultural and culinary roots. His mother who is of Chinese ancestry comes from Malaysia, and his father hails from Hong Kong. Meanwhile, Cheung was born and grew up in Vancouver, attending culinary school here. 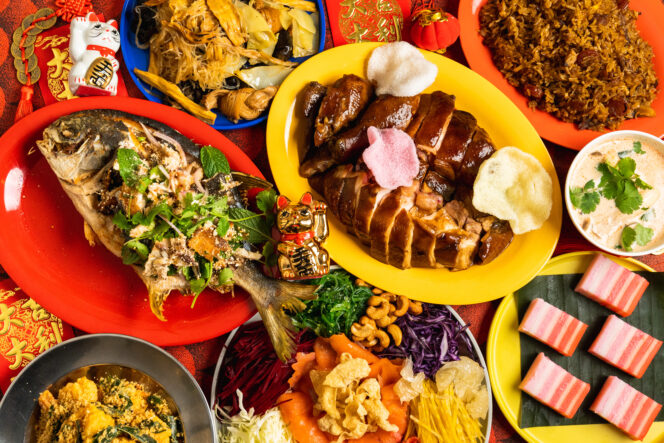 He remembers celebrating Lunar New Year’s Eve with his family when he was a kid. “Mine tended to be a little more on the Hong Kong or Chinese-style, so whole chicken, whole fish, mushrooms. Usually there was a noodle dish,” Cheung says. His mother often made dishes that were more Malaysian-influenced, evidencing the many cultural influences in his family’s kitchen. 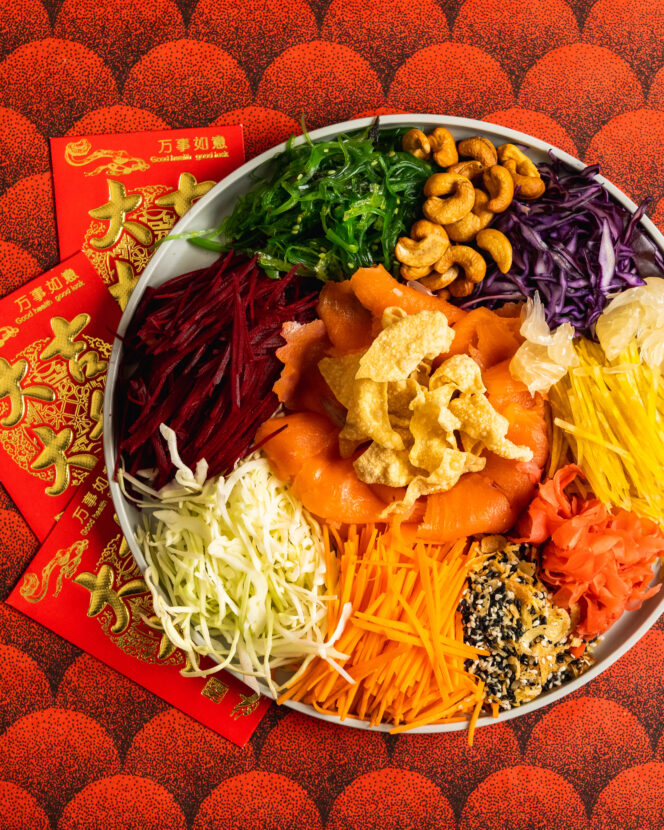 Cheung sees Lunar New Year as an opportunity for thoughtful reinterpretation. “It’s a chance for us to look at the things that are popular or traditionally eaten and putting our own spin on them,” Cheung says. He hopes that Potluck’s menu instills new family traditions that speak to the cultural diversity and vibrancy of Vancouver. In his own home, he’s sharing Lunar New Year with his wife, who is Filipino Canadian, and his two young children who are new to celebrating it. “It’s a way of teaching the youth about their history. I translate it now through cooking, showing everyone there is diversity in Chinese culture,” he says. He emphasizes there are so many different ways of marking Lunar New Year. 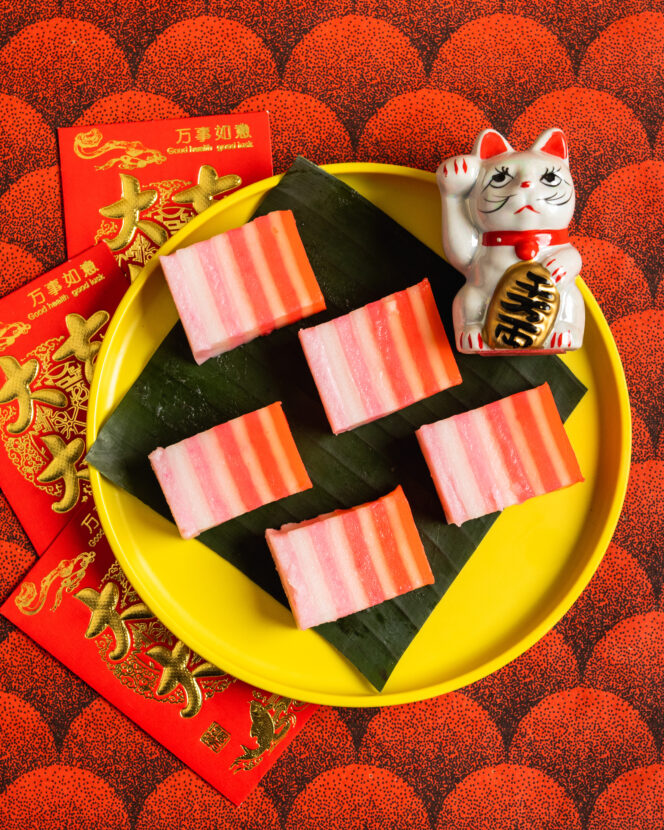 Food from the Chinese Malaysian diaspora can also be found at the many locations of Banana Leaf. Owner Calvin Chong explains that back in Malaysia, Lunar New Year represents an opportunity for the Chinese community to celebrate their home country, especially for ones who are homesick or longing for the place left behind. Because of the multiculturalism of the country, he says, “Everyone has their own turn to celebrate New Year.” For his family, Lunar New Year was always a lively time with plenty of lucky food, such as oysters, which are associated with wealth and good business.

Chong recommends Banana Leaf’s twelve-course tasting menu ($55 per person, minimum two people) for Lunar New Year. It comes with many dishes that will bring prosperity to the New Year including deep fried curry oysters and wild sablefish with caramelized ginger. He says that the garlic peppercorn jumbo prawns on the menu are connected to happiness and joy. Other highlights are Singaporean chili lobster tails, Assam curry scallops, and cumin coconut mussels. Popular menu favourites like rendang beef curry and sambal green beans with okra and eggplant make an appearance. The sumptuous meal ends with pisang goreng, deep fried banana with ice cream. “It’s one of best desserts in the house,” Chong says. 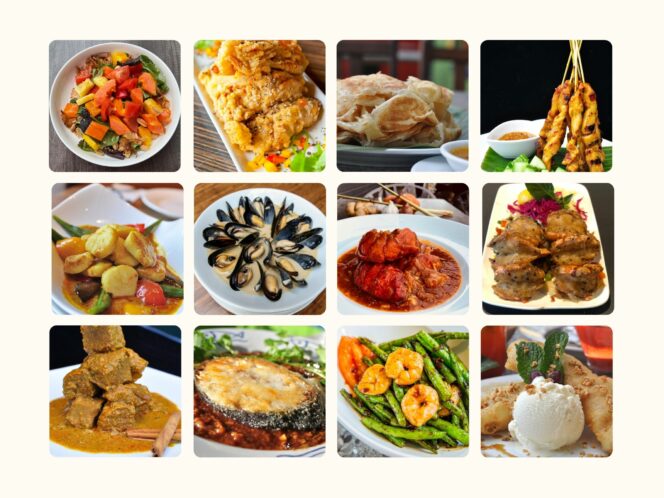 You can find drinks for toasting Lunar New Year at Cold Tea Restaurant, in addition to special dishes they’ll be crafting for the celebration. Owner Ron Cheng thinks fondly on past Lunar New Year celebrations with family. “There would always be a chicken, pork, and vegetable dish, but my favourite would have to be the fish. It was just a simple steamed fish, with a light soy broth and a whole bunch of different herbs. It would be flaky and moist and paired perfectly with a nice bowl of white rice,” he says. 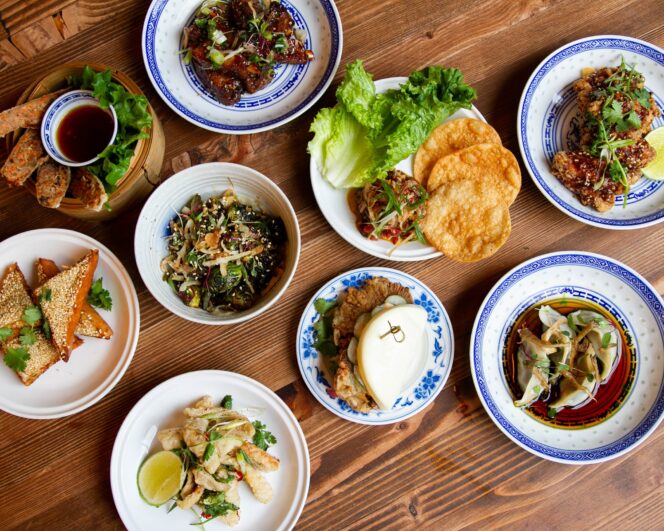 For Cheng, Lunar New Year is about taking pride in his culture. “As first-generation Canadians, this is a way for us to reconnect to our Chinese heritage, something that our generation has a hard time with. Growing up Asian and being exposed to different food, it’s our responsibility to continue the tradition and share it with the rest of our guests that walk through our doors,” he says.

He recommends drinking their Confucius Punch Bowl, which comes in a porcelain soup bowl that is often used at Chinese restaurants. The punch features Baijiu, which is a Chinese distilled liquor. His other suggestion is the NY Sour, which contains whisky and a spiced-red wine reduction. The reduction gives the drink a red hue that is symbolic of happiness and luck. 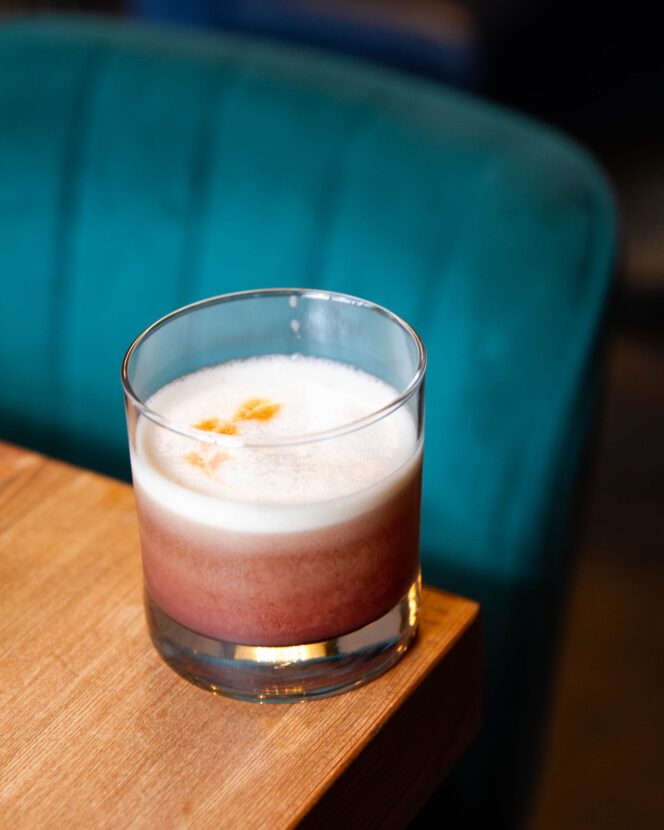 “To me, Lunar New Year brings about a fresh start,” Cheng. And if that fresh start can involve delicious food and drink with those you love, all the better.

All these chefs and restaurateurs highlight the many shared and different ways Lunar New Year is celebrated in Vancouver.

For The International Day Against Homophobia And Transphobia, LVMH Confirms Its Commitment To The Fight Against LGBTI+ Discrimination And Supports The Awareness-Raising Film Produced...