Vancouver Drag Artists Are Back On Stage – And Bolder Than Ever

After over a year of barely performing, Rogue made their return as a performer during Pride this summer when they felt comfortable and ready to hit the stage. “I was just so excited to come back and so mentally prepared because I had been thinking about it for so long,” they say.

Rogue, a non-binary Jewish drag artist with the tagline “Shalom hi,” has been a drag performer for the last five years. They’re mostly self-taught, although they did train in hip hop and musical theatre as a kid. Initially as a drag artist, they felt the need to be a hyper feminine blonde, partly to live up to a specific drag aesthetic, but it just wasn’t who they were. Instead, three years ago, they focused on performing as an androgynous club kid and experimenting with other stage personas – and the crowds have been loving it. “This city has always been pretty accepting of alternative performers. I just didn’t want to really put myself out there. And it took me feeling comfortable in the space for a good little bit to start exploring,” they say. 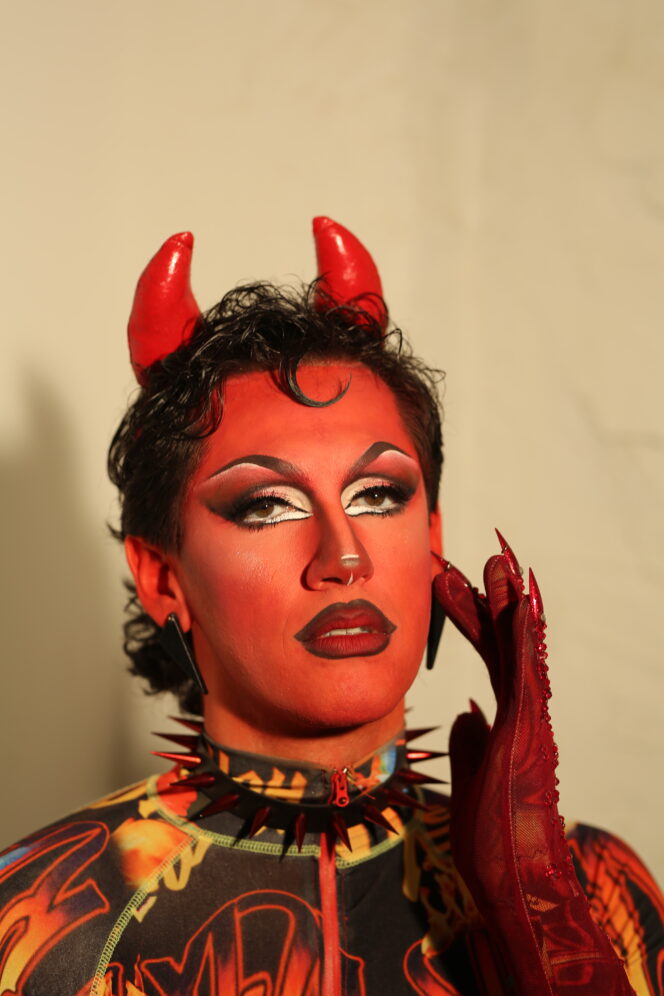 The pandemic has been a very difficult time for live performers, and drag artists have been no exception. Rogue essentially stopped performing in March 2020, only doing the very occasional pop-up show. They perfected their make-up techniques while forced to be at home, and turned to TikTok as a virtual performance space. But something was still missing. 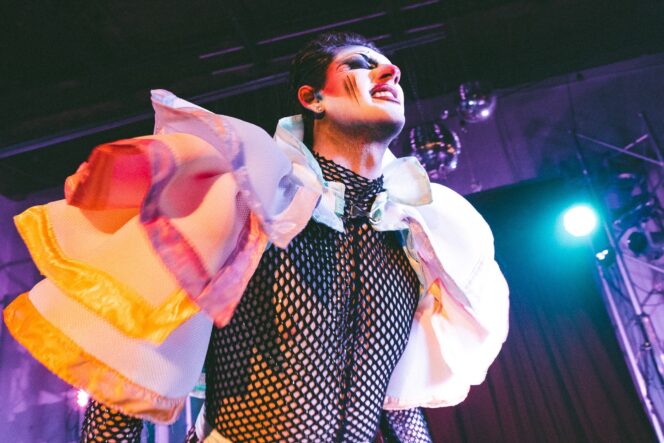 Rogue is also hosting a monthly country music-themed drag event called “The Old Town Rogue Drag Show” at The Yale Saloon (1300 Granville Street). The next show takes place December 12. So far Rogue has really enjoyed the switch to hosting and using their voice on stage. “I like hosting. It gives me this other side of me that’s more playful, more fun, and that’s more vulnerable. I like to poke fun at myself too,” they say. 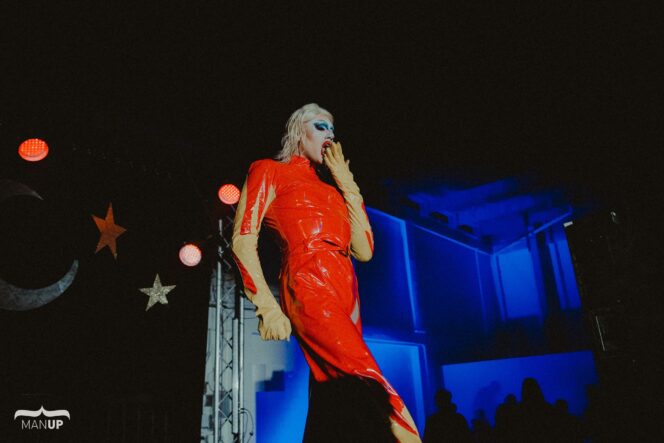 After such a long break from drag, audiences have realized they can’t take drag for granted. “Everyone is so grateful to be there. It’s amazing,” Rogue says. Whereas audiences in the past were sometimes indifferent, “now, we look out to the crowd, and everyone is looking at us.  Everyone wants to be there.” Rogue attributes this surge in interest partially to new audience members who turned 19 during the pandemic, as well as people watching Drag Race while they were cooped up at home and becoming fans of drag.

Continental Breakfast, a non-binary Indigiqueer drag artist, sees drag in Vancouver now mobilizing in a way that is true to drag’s political origins. 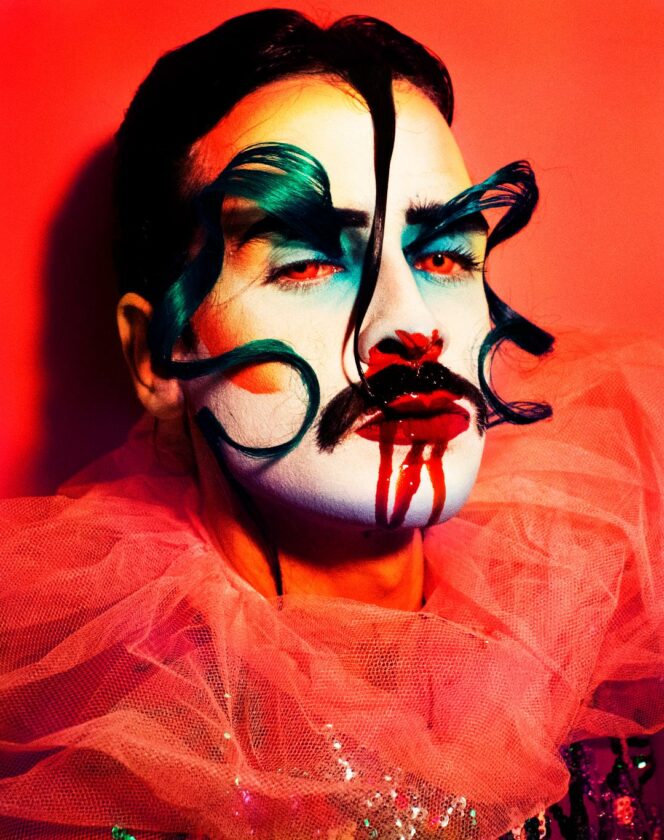 “It’s reverting back to political activism. I think that people forgot that drag started as an act of rebellion and political expression, being loud and out. It turned into escapism art and something that people go to to forget about the outside world,” they say. Continental Breakfast loves the vibrancy and joy of drag, but they also feel drag has an important role to play in forging community and activism.

“I think people are remembering that platform exists for a reason, and it’s because we’re supposed to be helping our community,” they say. During the pandemic, Continental Breakfast argues that the discovery of mass graves at former residential schools, and movements like Black Lives Matter and Stop Asian Hate have raised awareness of the need for diverse and equitable representation and for societal change. They cite extended land acknowledgements before performances as well as drag artists getting involved in fundraising as evidence of mounting community-minded work. Rogue, for example, has a weekly performance number that has raised over $2,500 for the Indian Residential School Survivors Society.

Continental Breakfast says the pandemic has been very difficult for them as a social, audience-based performer. The Darlings, the multidisciplinary non-binary drag performance collective they’re a part of, held Quarantine online shows but technical logistics, censorship, and increased public scrutiny made the virtual space feel less safe. 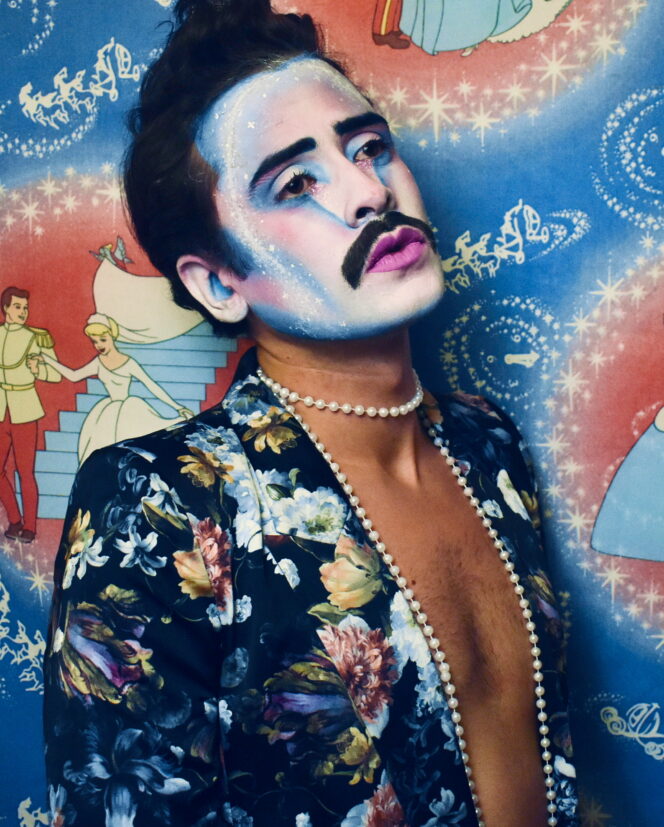 Plus, they really missed being in a space performing for other people. “I really get gratification from making a room laugh or making them smile or cry. Feeling with other people is why I do drag,” they say. “Making work in isolation when you’re used to being collaborative and surrounded by hundreds of queers is a big, big change,” they continue.

So, when The Darlings did their first live show at Eastside Studios for Halloween, Continental Breakfast was overwhelmed with emotion. “We were back. I cried the whole show, essentially,” they say.

On November 21, Continental Breakfast recently held “Continental Circus: A Drag Puppet Dramedy Musical” to share the puppets that kept them optimistic this year and a half. “These puppets got me through this pandemic, honestly. I spend hours and hours making them. And when I have nothing or feel like I’m at my zero, I can look over – it sounds stupid – but they’re smiling at me,” they say. The puppets remind them that they are proud to be non-binary and that they don’t need to conform to socially constructed labels.

The unconditional love of their puppets is what Continental Breakfast wants to pass on to other aspiring drag artists. They are co-organizing with their Queer Based Media partners an event called “Soda POP,” an all ages drag event hosted by drag kid prodigy Minor Disappointment. It’ll be taking place November 27 at Eastside Studios and will feature snacks, games, mocktails, music by DJ T, as well as a big show with youth drag artists and “drag elders.”

The intent is to create a fun, safe space for LGBTQ2S+ youth as well as to mentor up-and-coming drag artists about the craft, the business, and the courage and resilience necessary to be themselves. “I want to have a place where they can come and be a star. And be hilarious and their authentic, weird selves. I used to think that was the worst part of me, and it actually ended up making me successful,” they say.

Like Rogue, Continental Breakfast sees a shift in audiences, promoters, and venues when it comes to appreciating and valuing drag. “During the pandemic, people realized that they need art, more than anything,” they say. Continental Breakfast underlines how drag is more than just “nail polish”; it involves art, hard work, tons of time investment, and considerable risk as well.

And fortunately, drag artists are now being recognized for their craft, more than ever before. “People are so excited to see us, which feels so good,” they say. It’s an incredibly exciting time to perform and to watch drag in the city in all its diverse, inclusive, and community-building forms.

Rogue can be found @itsjustrogue on various social media; Continental Breakfast can be found on IG @contibreakfast.