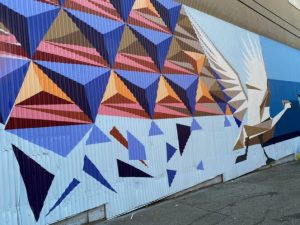 When you explore the many neighbourhoods of Vancouver, wandering through alleys and streets lined with diverse businesses, restaurants, and retail stores, you’ll be struck by the vibrant colours and bold lines of the murals on many walls.

Vancouver Mural Festival (VMF) is a joyous celebration of the creativity, community, and connection forged by the murals around the city. This year’s VMF runs from August 4 to 22, 2021, and has an array of events and experiences that will make the streets come alive with artistic creativity. 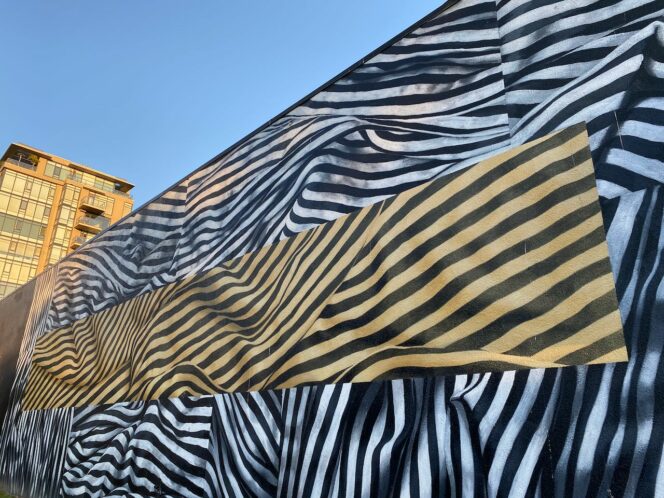 Since its inception in 2016, Vancouver Mural Festival (VMF) has expanded into a multi-week event that encompasses the entire city and its many communities. This year spans 11 neighbourhoods, including Strathcona, Cambie Village, Punjabi Market, Downtown, and South Granville, each with their own distinct character, history, and socio-cultural identity. Basically, the whole of the city and its street art are at your feet–and at your fingertips.

VMF has a fabulous app that you can download for curating your very own self-guided mural tour. Along with an interactive map, the app allows you to filter your search. For example, you could focus on the over 60 new murals, including “Habesha Prichorde” at 700 Main Street by the artist Mediah. You can also pick an area in the city, like the North Shore, to explore, or you can seek out particular types of murals, like “Massive Murals” or murals by Indigenous artists. The app even has a list of murals that are close to craft breweries and cafes for combining your mural tour with a beer or coffee crawl. Otherwise, you could also let serendipity be your tour muse, and just walk around a neighbourhood with a high concentration of murals (e.g., Mount Pleasant) and see what striking murals you encounter on your meanderings.

Go on a Guided Mural Tour 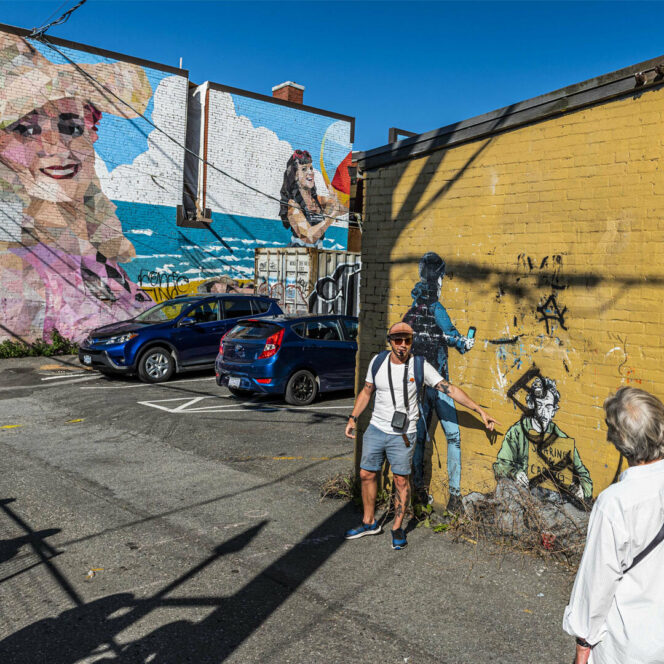 If you’d rather be led by a mural/neighbourhood expert, VMF has some fascinating tours with guides, as well as curated routes that you can follow on your own. The “Black Strathcona Tour” is offered Friday-Sunday at 10am during the Festival and will showcase the murals from the first year of the Black Strathcona Resurgence Project (BSRP), in addition to providing an introduction to the history of Hogan’s Alley, which was home to a thriving Black population before the building of the Georgia and Dunsmuir viaducts effaced it and dispersed the community. The tour will be guided by Vancouver DeTours’ Alasdair Butcher, BSRP Lead Curator Krystal Paraboo, and a knowledgeable member of the Black community. The tour is by donation ($10-15 recommended) with registration happening online. Other tours are the “VMF Hidden Gems Mural Tour,” the “VMF Foundations Mural Tour,” and the “BSRP Bike Tour: Exploring Black Public Art Around the City.”

Attend an Informative Talk or Workshop

Part of the goals of VMF is to cultivate cultural development in Vancouver, as well as further new and existing conversations between people, areas, and cultures. The engagement begins with an online event on August 5, which launches the documentary Weaving the Path: Blanketing the City and will involve a Q&A with the filmmakers, as well as weavers Debra Sparrow, Angela George, and Chief Janice George. The workshops wrap up on August 21, with an Insta Live talk with Jag Nagra and Gulzar Nanda, the coordinators of the Punjabi Regeneration Collective Project. Other events include an online “Unlearning Anti-Blackness Workshop” on August 12 and an online talk on “Building Towards Afro-Futurism” on August 17.

Learn More About a Community Project 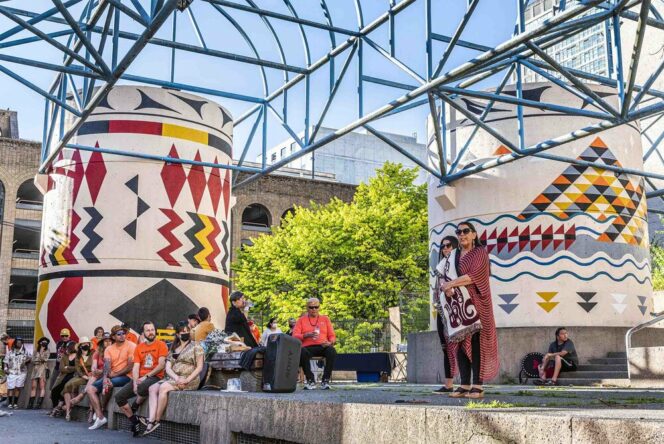 Part of the richness of VMF is its attention to a sense of place, and the history, cultural heritage, and present artistic work occurring on it. A really exciting project is “Blanketing the City IV: Cathedral Square,” part of an ongoing reconciliation initiative that began in 2018. Led by Musqueam weaver and graphic designer Debra Sparrow, the project aims to spotlight Coast Salish weaving and its crucial cultural role that has been ignored and devalued for so long. This year’s instalment involves master weavers Chief Janice George and Angela George who designed 7 murals to cover the concrete pillars of Cathedral Square, a downtown space that is situated above an underground BC Hydro sub-station. The murals are striking, beautiful, and symbolic of the re-empowerment of Musqueam, Squamish, and Tsleil-Waututh visual culture in Vancouver.

Another project is the “Black Strathcona Resurgence Project (BSRP),” which narrates Black culture as it intersects with Chinese and Indigenous culture and history in the area through murals. Project Manager and Curator Krystal Paraboo and an Advisory Committee have brought together artists such as John Sebastian, Odera Igboke, and Sasha Mbabazi whose work challenge the systemic racism that the Black community has and continues to face.

Enjoy a Live Show at a Pop-up Patio 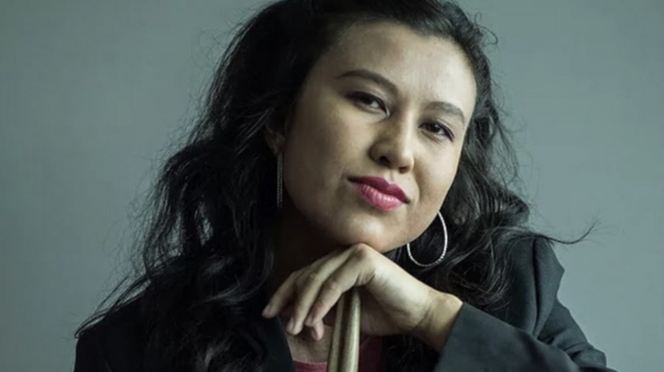 KeAloha will be performing August 8 at the Brunch Club

At Main Street and East 5th Avenue, you’ll find the VMF Pop-Up Patio, where local emerging artists will perform in a welcoming and lushly decorated space. The programming is lively and diverse, and promises to be lots of fun! A weekend Brunch Club (August 7-8, 14-15, 21-22) has two sittings each day, during which time you will enjoy a meal from a local food truck, like Crack On, and get entertained by a range of artists and performers, such as KeAloha who will appear on August 8. Other highlights are a Burlesque Showcase with artists like Rainbow Glitz and Ziggy Zaya on August 8, and a Circus & Flow Art Community Showcase on August 12. Expect lots of talent and infectious energy.

Overall, an explosion of different activities surrounding Vancouver’s murals will be happening over the course of 19 days, leaving plenty of time to explore and pay tribute to the many neighbourhoods and communities in the city. More info can be found online.

By TARA LEE
Source Inside Vancouver 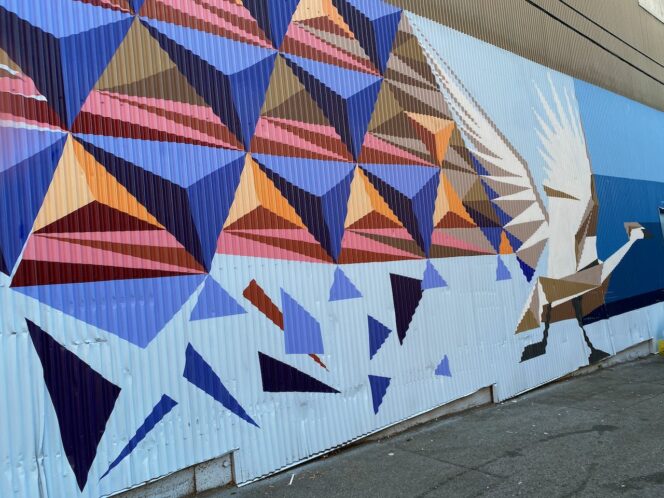 12
August 5, 2021
Previous article‘Hawkeye’: Clint Barton And Kate Bishop Take Aim On November 24
Next article“Live Wherever You Want On Airbnb” 12 Participants Selected From 314,000 Applicants In The World