Vancouverites take their ice cream and gelato very seriously, leading to exceptional high quality and inventive flavours. There are plenty of establishments around town for a treat that will cool you down and satisfy your sweet tooth.

Below are some options to get you started with your ice cream explorations! 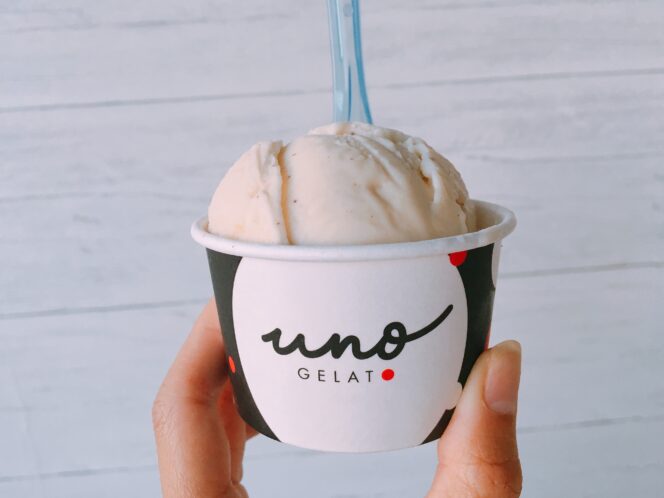 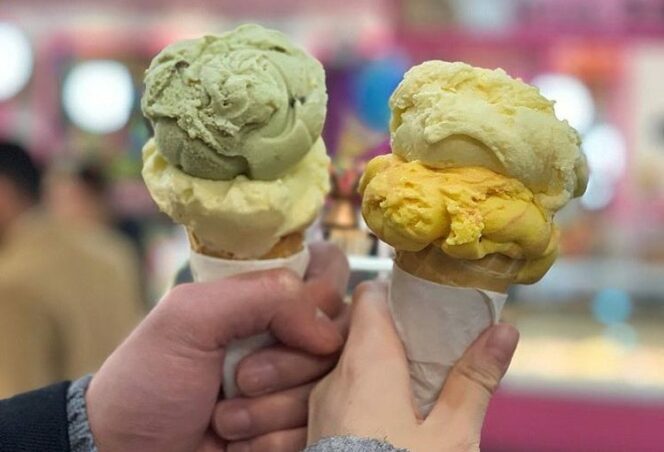 If you like having seemingly endless choices, you will love La Casa Gelato (1033 Venables Street), where you can find 238 flavours at any given time out of their 588 invented flavours. This Vancouver favourite, going strong for 4 decades, garnered a Guinness World Record in 2019 for the “Most Commercially Available Flavours.” Gelato is made in small batches using natural ingredients, and has flavours for different dietary requirements (e.g., vegan, gluten free, nut free, dairy free). Unusual flavours include curry, roasted garlic, and lavender. 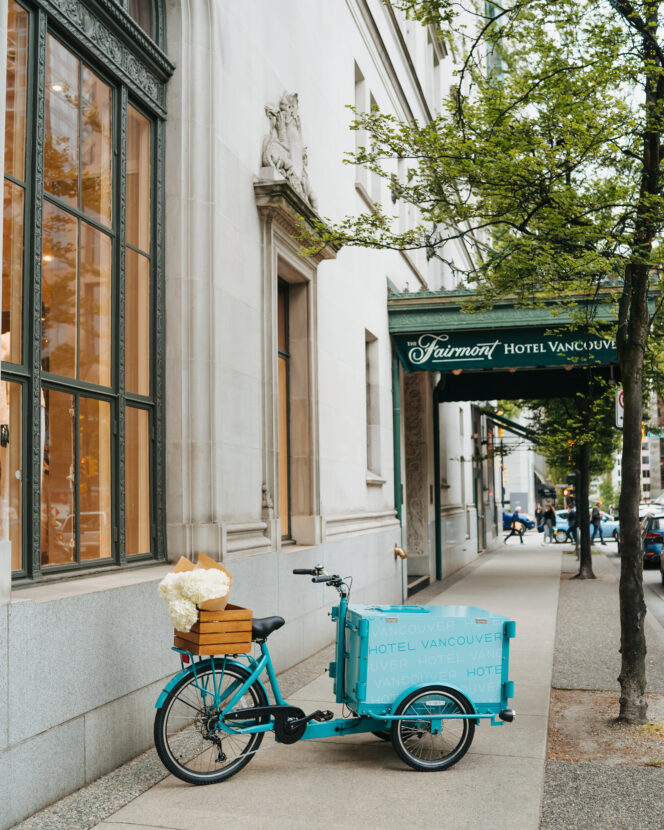 Every Friday until September 2, Fairmont Hotel Vancouver (900 West Georgia Street) is featuring a whimsical “Treat-Cycle,” which will be parked outside the hotel from noon to 4pm. Make sure to get there early since it’s first come first serve for the limited quantities of the special weekly flavour. You can expect flavours such as dulce de leche, peaches and cream, and lemon meringe pie. 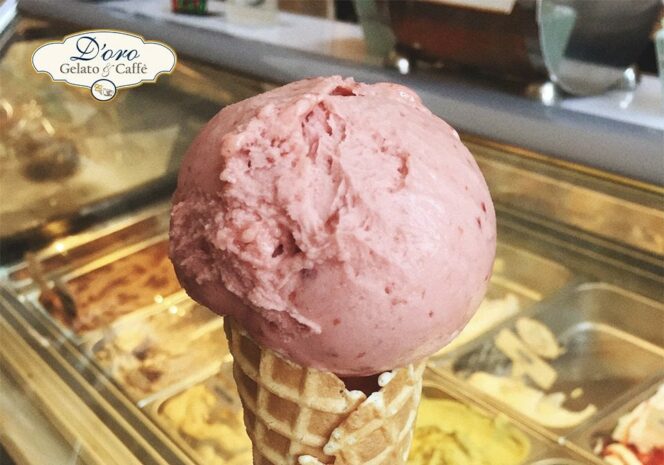 Part gelato shop, part café, D’oro (1094 Denman Street; 1222 Robson Street) has been proudly serving Vancouver customers since 2000. Their traditional recipes and proud certification by the Unioncamere and Italian government as Ospitalitá Italiana—ambassadors of Italian culture—makes D’oro a destination for authentic gelato. Flavours range from spumone to rum raisin, with many seasonal and holidays flavours spotlighted. 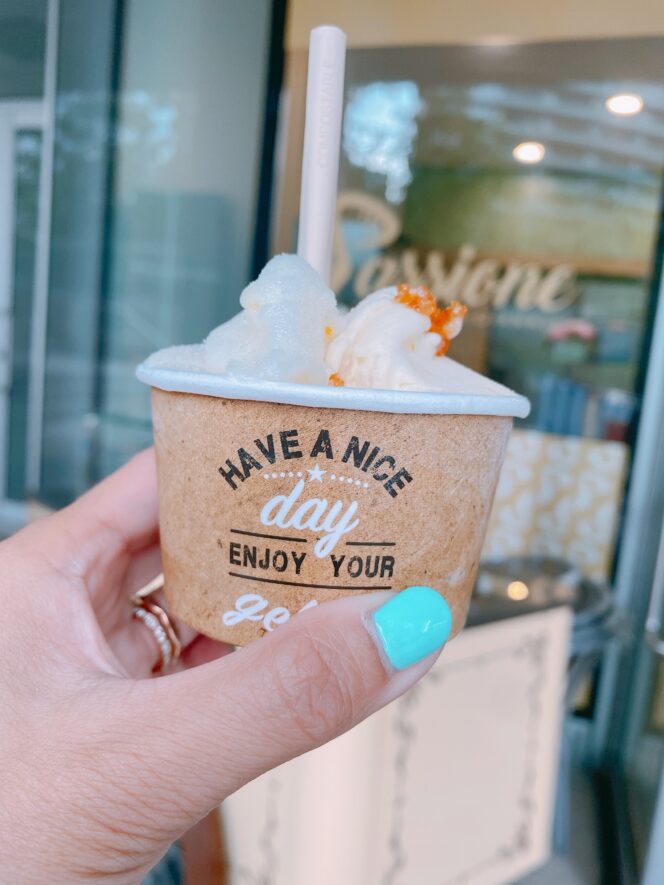 Located at Parq Vancouver, Passione Gelato Artigianale (55 Smithe Street) makes some of the finest and most creative gelato in the city. Naples-born Salvatore Boccarossa used to work at Bella Gelateria and then went off to start his own establishment. Trained at Carpigiani Gelato University, Boccarossa clearly knows his gelato. Using the best organic ingredients, he crafts a variety of flavours, such as Grandma’s tiramisu, vegan pistachio, and fresh mint chip. Fun seasonal and limited time flavours are worth checking out. 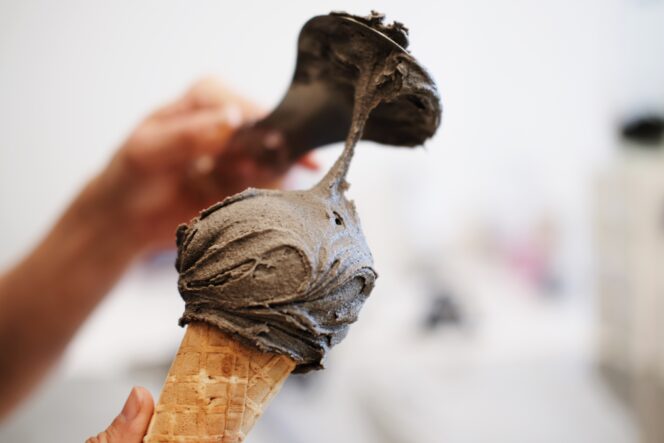 Motoretta (1001 West Cordova Street) launched last month to great excitement after Bella Gelateria vacated the location. The spot is now home to artisanal Italian gelato, also under the direction of master gelato maker Salvatore Boccarossa in partnership with Kitchen Table Restaurants. Flavours will change seasonally; however, some of their core flavours are matcha green tea, Piedmont hazelnut, and stracciatella. Dairy free choices include puertomar (dark chococolate with Criollo variety) and gianduia (chocolate hazelnut). For other refreshing options, try their granita, such as moka espresso or a zippy lemon. 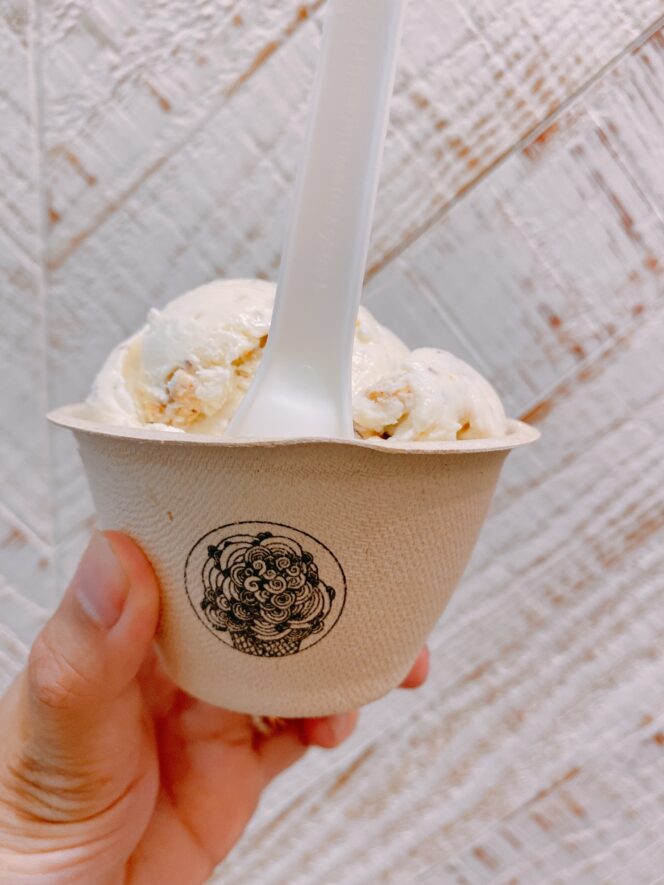 Prepare to wait in line for one of Vancouver’s most beloved ice cream companies. Earnest Ice Cream (various locations) started selling out of a tricycle cart at various farmers markets but quickly realized they were onto something much bigger. While they do still sell at markets, they’ve also become known for their ice cream shops where you can buy treats by the scoop or by the pint in jars. The creamy texture and intensity of flavour make Earnest’s ice cream well worth the wait. Flavours include whiskey hazelnut, salted caramel, and vegan peanut butter chocolate pretzel. There are also ice cream sandwiches and sundaes on offer. 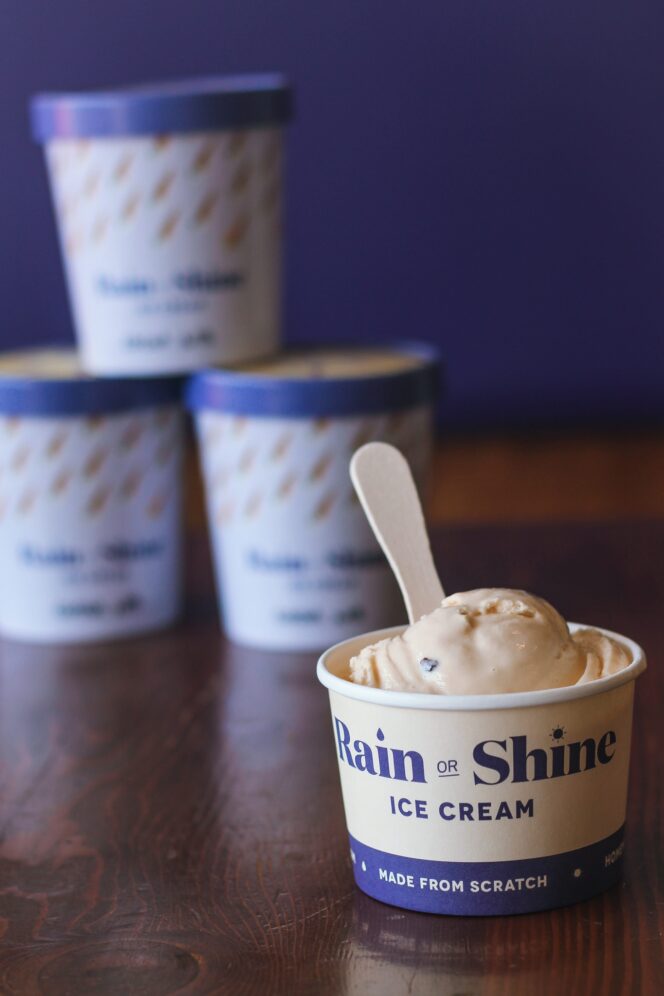 The name of this popular ice cream chain reminds everyone that ice cream is a good idea any time. Rain or Shine (various locations) offers natural ice cream that showcases whole, local ingredients. A scoop or two of their ice cream is sure to be comforting. Their Philadephia-style ice cream, meaning it contains no eggs, features options such as malted milk chocolate, blueberry balsamic, and peanut butter. “Seasonal flings” often make the most of seasonal produce, such as blueberry lime and strawberry Earl Grey. 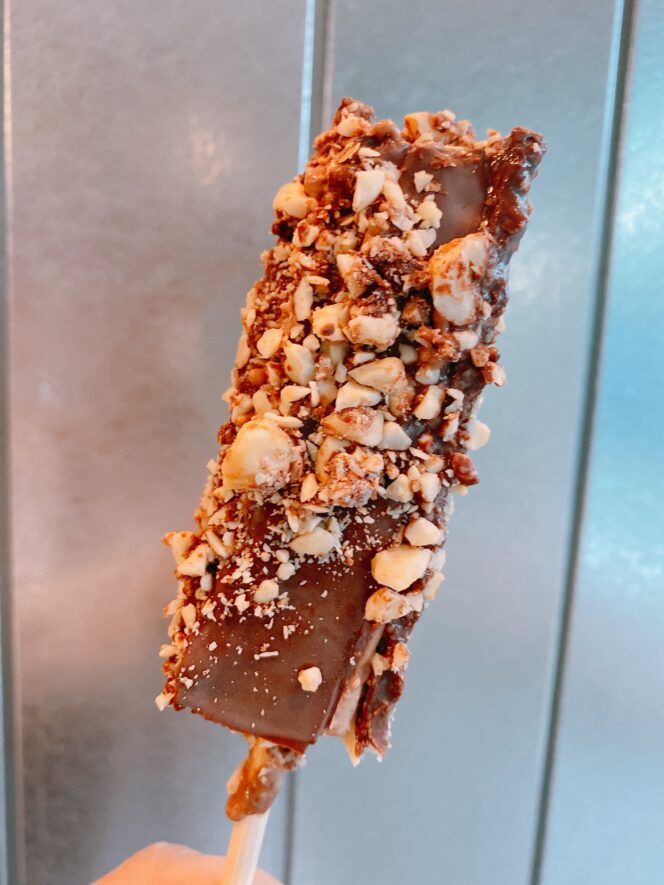 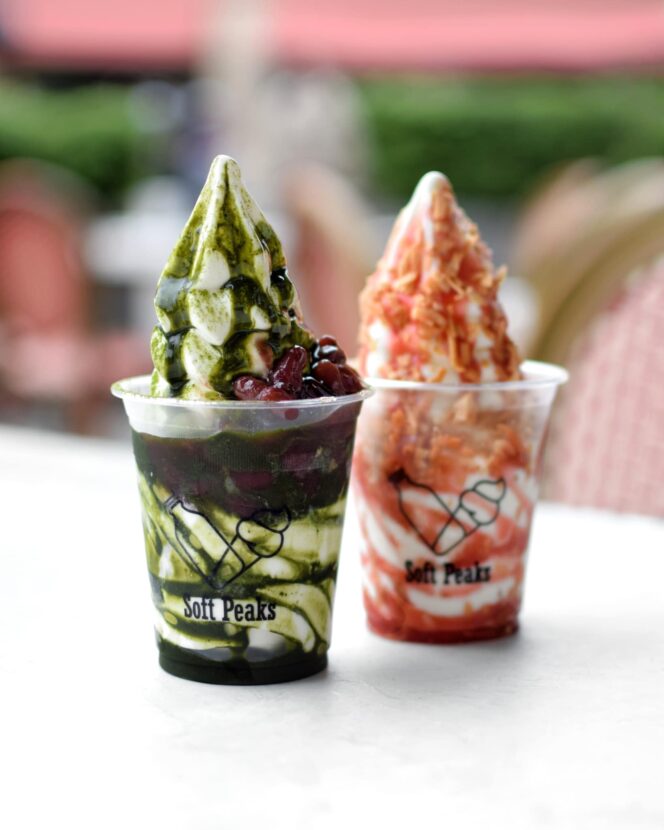 If soft serve is more your style, Soft Peaks (various locations) offers a version far superior to what you’d find at a fast food joint. Handcrafted with Avalon organic milk, their soft serve is creamy, not too sweet, and all natural.  Choose between organic milk, dark chocolate, or twist, and then pick your toppings combo. Selections range from the Mudslide, with TimTam flakes and chocolate syrup, to the Gastown, with tiramisu toppings. Milk bars, swirls, and milkshakes are also available. 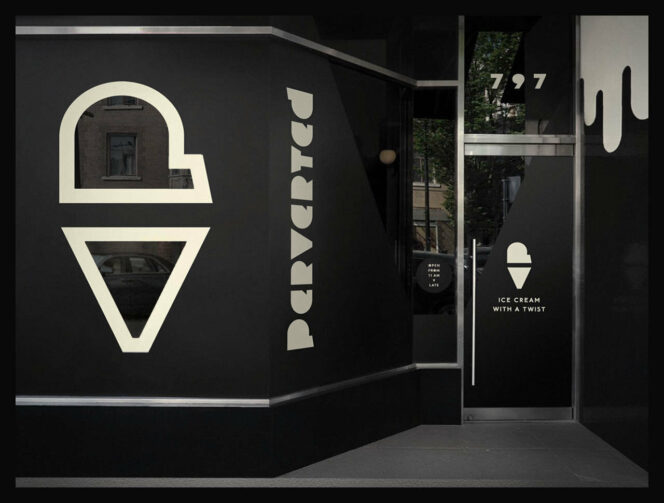 Another purveyor of gourmet soft serve is Perverted (797 Thurlow Street), located in the heart of downtown. They’ve come up with some zany flavour and topping combinations, such as the Brand Spanking with cream and chocklit soft serve, punk chocklit hard shell, crumble, and chocklit and cream cookie. Their aim is to depart from the ordinary in the most scrumptious of ways. 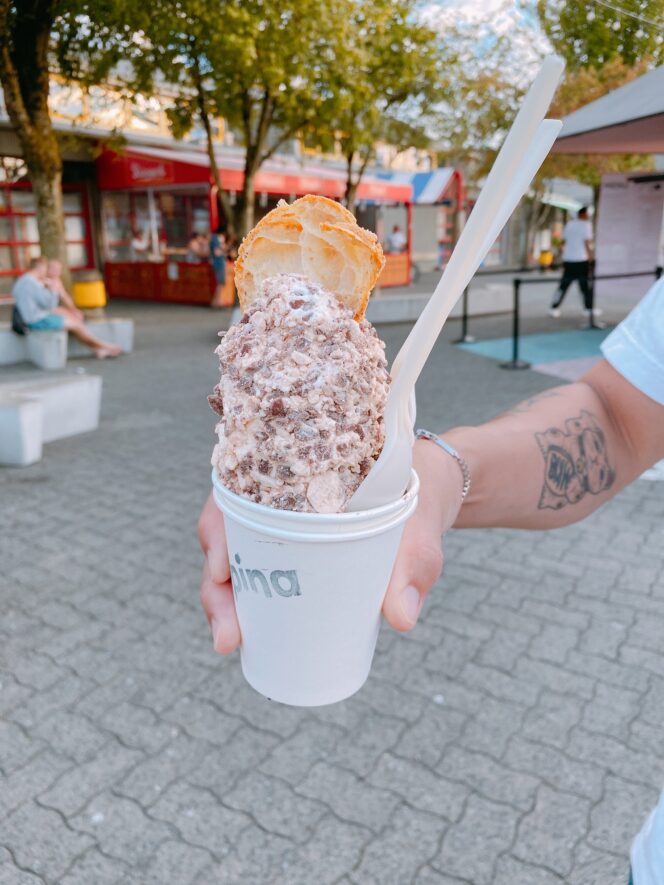 With its Granville Island location by the water, Popina offers ice cream with a stellar view. Their signature puff cream comes filled with soft serve made from Birchwood Dairy milk. Topping options include the Malteser with crushed chocolate covered malted milk balls and the Bees Knees with Chicago mix popcorn and honey. 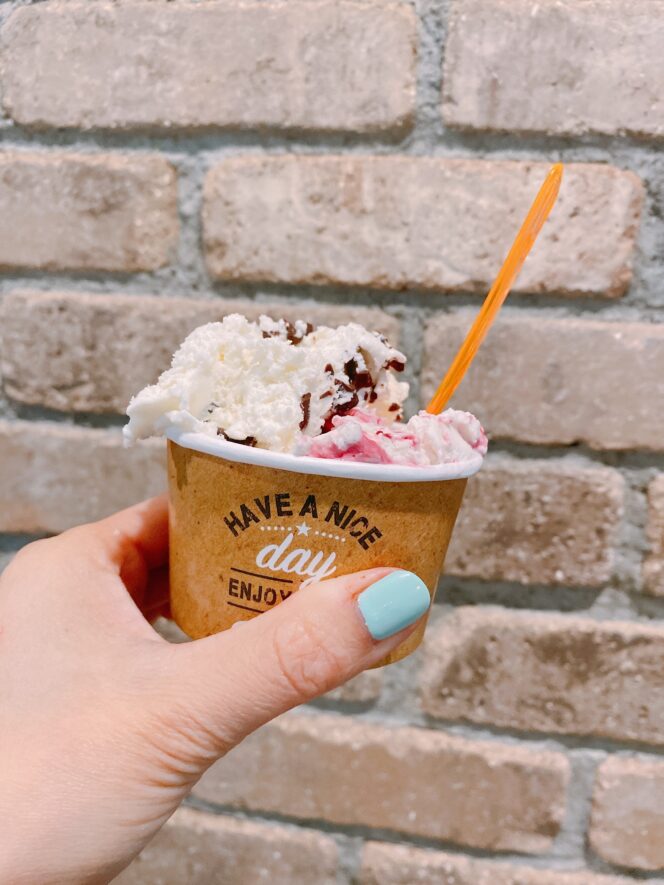 An under-the-radar option is the gelato at Casereccio Foods (2480 Vine Street), which specializes in fresh hand-made pasta and sauces. Many people don’t realize that their gelato comes from James Coleridge (Gelato by James), who graduated from Carpigiani Gelato University and has won almost a dozen competitions and awards since 2010. The café is serving a dozen of Coleridge’s flavours, 8 classic ones and 4 maestro ones. The sour cherry and chocolate is incredible but watch out for unique seasonal flavours. 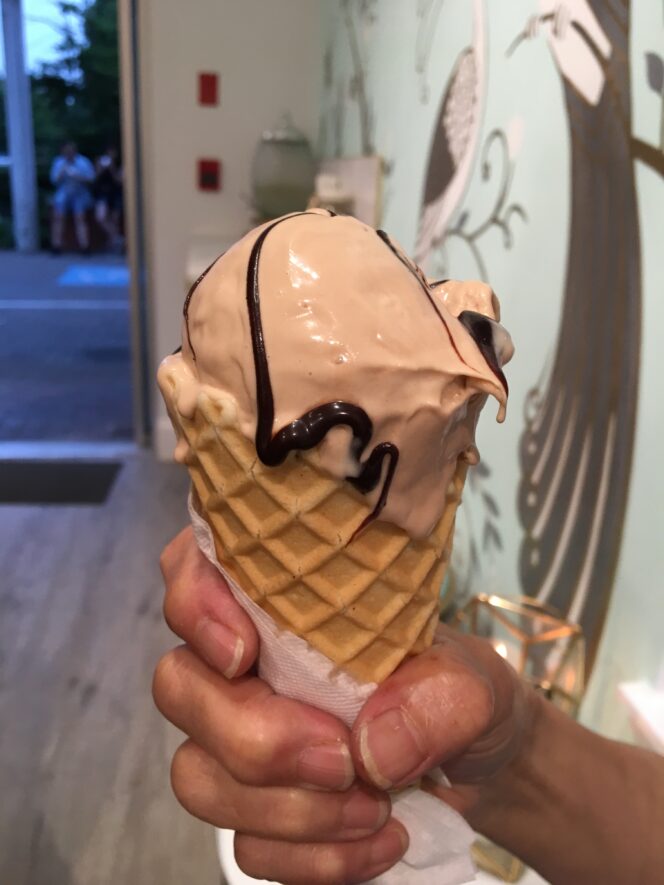 For the most elegant ice cream, visit La Glace (2785 West 16th Avenue), which specializes in premium French ice cream using a crème anglaise base. The ice cream is as lovely as the interiors of the parlour (you can make reservations for indoor ice cream eating). Co-founder and culinary director Mark Tagulao comes up with imaginative flavours, such as a cucumber lemon sorbet, vegan coconut pandan, and violet blueberry and lemon sablé. 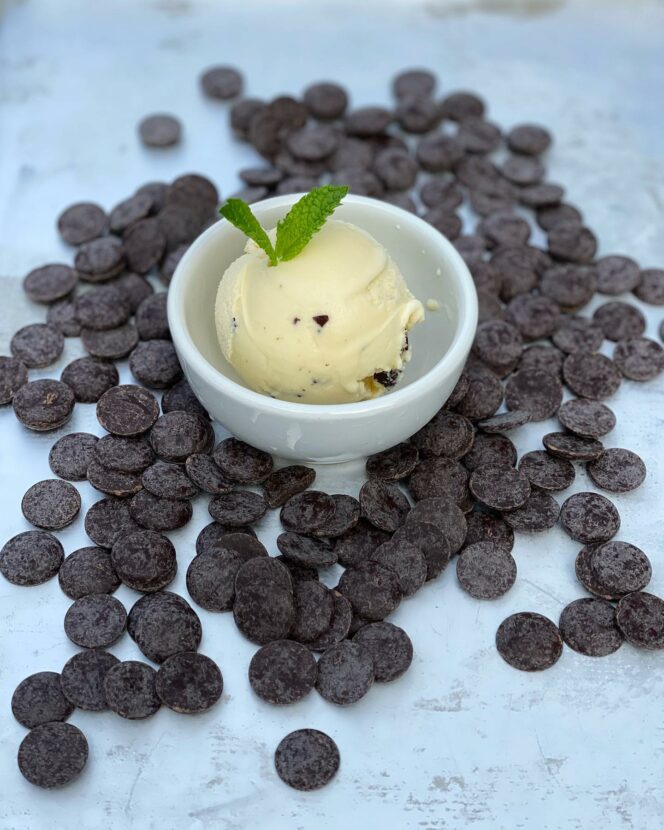 Known for their Asian-inspired flavours, Elephant Garden Creamery (2080 Commercial Drive) has developed a loyal following since it opened four years ago. Staple flavours include Vietnamese coffee and vegan mango coconut sticky rice while rotational flavours include Thai iced tea, durian, and Iron Goddess oolong cloud tea with white peaches. There are toppings aplenty, such as honeycomb toffee sponge, as well as drizzles, such as condensed milk. Try a flight of four sample scoops if you’re indecisive. 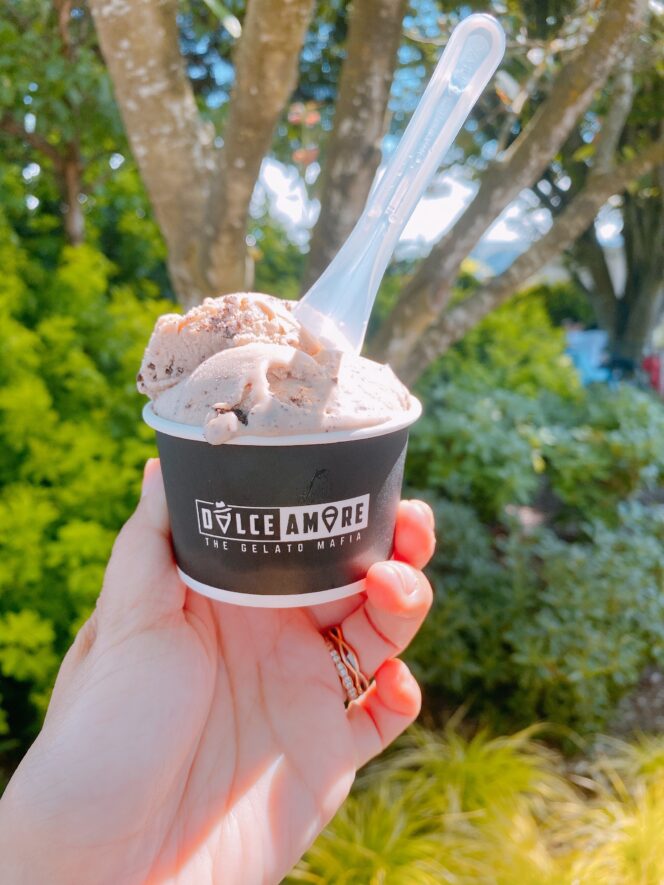 Dolce Amore (1588 Commercial Drive) is fittingly located in Vancouver’s Little Italy. Also graduates of the Carpigiani Gelato University, Daniela and Giancarlo Cusano have perfected artisanal gelato. Tastes and textures are refined, such as with selections such as black currant pavlova, strawberry basil, and minty fresh. Judging by the crowds on Commercial Drive, Dolce Amore is a neighbourhood darling. 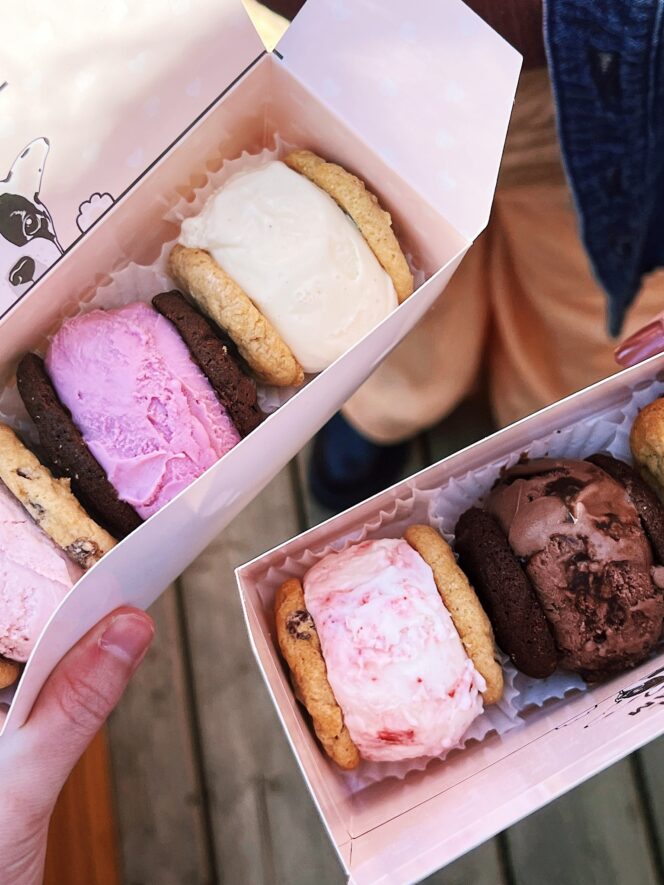 Those looking for gluten-free ice cream sandwiches and scoops of ice cream in waffle cones can head over to Innocent Ice Cream (4895 Main Street). The shop also carries many vegan options. A very generous amount of homemade ice cream comes sandwiched between freshly baked cookies. The classic with chocolate chip cookies and vanilla bean ice cream is always a good choice or try other versions, such as the Canadian with oatmeal cookies and maple walnut ice cream or the vegan Kong with double chocolate cookies and banana pudding nice cream. 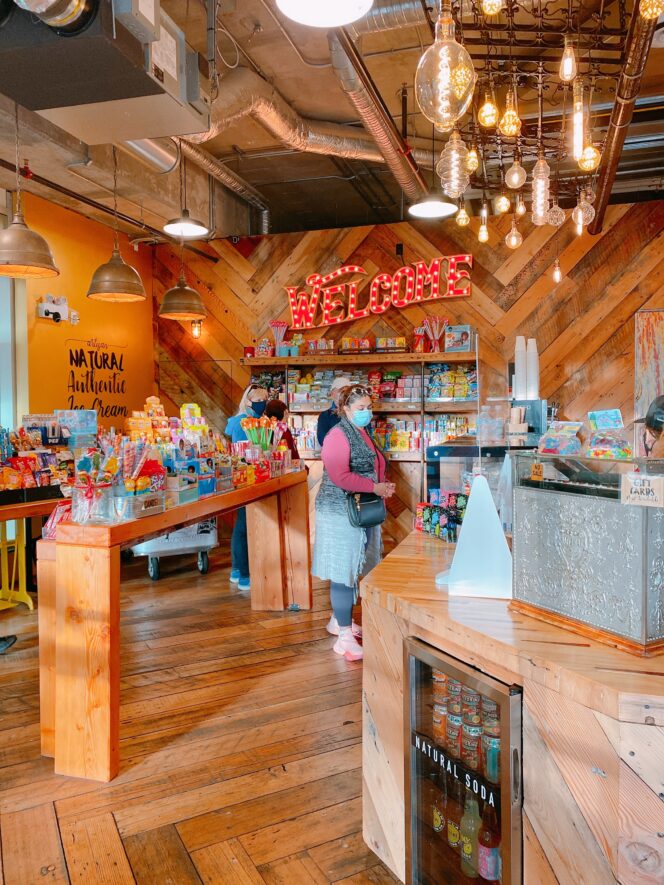 If you’re venturing to the North Shore, most particularly to the Shipyards, stop by Welcome Parlour Ice Cream (126-125 Victory Ship Way) for natural, small-batch ice cream. Flavours are classic and comforting, like organic strawberry, birthday cake, and rocky road. 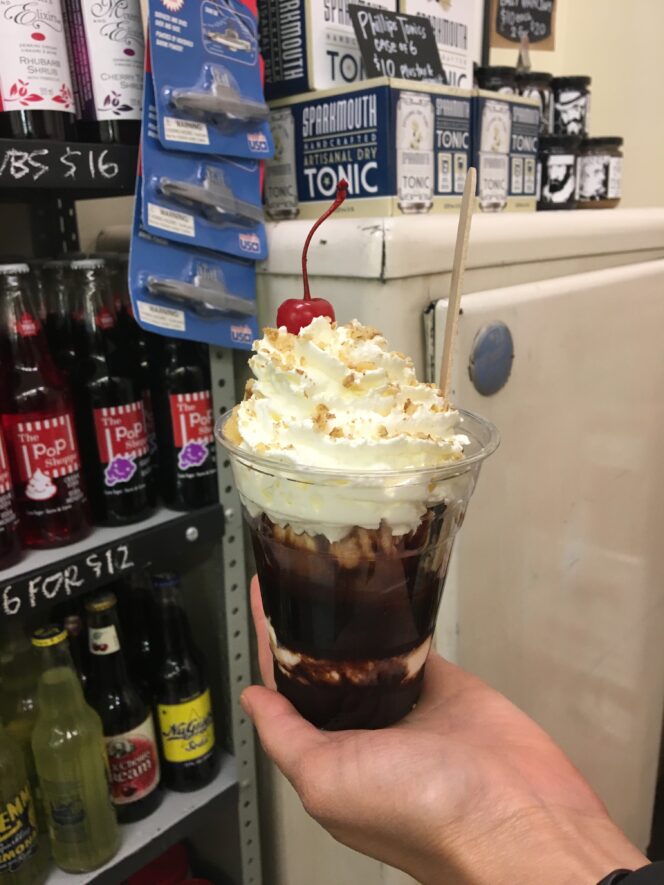 This ice cream parlour is off-the-beaten-track but worth an outing. Glenburn (4090 Hastings Street, Burnaby) offers a nostalgic experience, for ice cream lovers. Décor has a vintage feel, as does the menu with selections such as a traditional banana split, floats, and ice cream cup cakes. The place will bring out the kid in everyone.