Vancouver’s Theatre Under The Stars Returns With Blockbuster Sensations ‘Something Rotten!’ And ‘We Will Rock You’

Photo: Theatre Under the Stars (TUTS)

Audiences will indulge in a hilarious love letter to Broadway and revel in a worldwide sensation of Queen’s most beloved rock-and-roll hits when Theatre Under the Stars (TUTS) presents Something Rotten! and We Will Rock You, running alternate evenings July 2–August 27, 2022, at Stanley Park’s scenic Malkin Bowl. A beloved Vancouver tradition since 1940, TUTS’ early bird tickets are on sale now through June 16.

“We are thrilled to welcome audiences back to Stanley Park’s majestic Malkin Bowl this summer for a season of unforgettable musical theatre that will breathe new life into the TUTS stage,” says TUTS Board President Patrick Roberge. “Something Rotten! is a playful romp through Elizabethan England, filled with satirical comedy and big show stopping numbers and We Will Rock You is an electrifying rock concert and futuristic tale of freedom fighters, featuring Queen’s best loved hits. Both musicals will leave audiences aglow with love and laughter, uplifted with hope and pulsing with fistpumping adrenaline.”

TUTS’ 2022 season showcases two sensational musicals that epitomize all of the best qualities of the beloved theatrical genre: elaborate set design, dazzling costumes, and show stopping musical numbers. Something Rotten! hilariously follows two playwright siblings Nick and Nigel Bottom in the Renaissance era, whose dreams of writing a hit show are thwarted by Shakespeare’s wild success. A mysterious soothsayer foresees a new way forward for the brothers: Creating a brand new form of theatre – the musical! Set 300 years in the future, We Will Rock You tells the high-octane tale of two misfits, Galileo and Scaramouche, who rise up in their fight for freedom against the sinister world leader, Killer Queen. 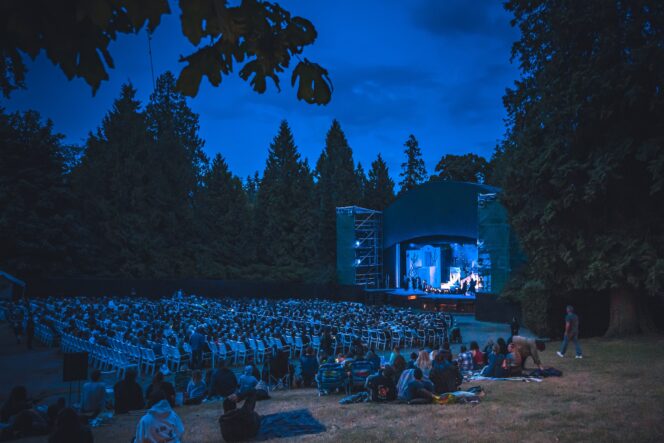 Photo: Theatre Under the Stars (TUTS)

An irreverent homage to Broadway, Something Rotten! is a whimsical satire that both celebrates and pokes fun at everything audiences adore about Broadway. With clever lyrics and a vibrant, colourful songbook, Something Rotten! warmly embraces the musical theatre genre and all of its absurdities, referencing such timeless classics as West Side Story, South Pacific, and Les Misérables. Full of love and playfulness, the production ultimately reminds us that the grass is not always greener on the other side.

A breathtaking spectacle of Queen’s most iconic rock-and-roll hits and electrifying dance, We Will Rock You is packed with heartstopping numbers and a heartfelt underdog story that will leave audiences buzzing with hope. Having thrilled more than 16 million audience members worldwide, the musical features over 20 hits from the band’s legendary songbook including “Bohemian Rhapsody,”

“We Are the Champions, and “Another One Bites the Dust.” A celebration of music and art, We Will Rock You shows us the power of banding together to fight for what is right.

Playing the lead roles of Galileo and Scaramouche are Danny Malena and Jessica Spenst, who both make their TUTS debuts. Steffanie Davis will return for her fourth TUTS season as the villainous Killer Queen and Jennifer Suratos for her fourth TUTS season as Bohemian Oz. TUTS will welcome for the first time Tim Howe as Killer Queen’s second-in-command (Khashoggi) and Tanner Zerr (Brit) and Simon Auclair-Troughton (Buddy), as members of the Bohemian rebel gang. Christopher King is Music Director, with Shay Kuebler as Choreographer, Robert Sondergaard as Set & Lighting Designer, Brian Ball as Costume Designer, and Bradley Danyluk as Sound Designer.

Also making her TUTS directorial debut is actor and director Saccha Dennis, who will enhance the incredible music and eclectic rock garb of We Will Rock You – which celebrates its 20th anniversary in 2022 – with contemporary thematic elements, infusing the show with commentary on climate change, gender fluidity and binarism, as well as modern pop references to Harry Styles, Justin Bieber, selfies, and Tik Tok. Dennis was most recently seen on stage in the hit musical Come From Away, and has toured across North America, most notably as a member of the first U.S. national tour of We Will Rock You in 2013/14.

Relaxed Performance Monday, July 25
This year TUTS is proud to partner with the Canucks Autism Network to host a relaxed performance of Something Rotten! A Relaxed Performance is designed for anyone who may need a more casual environment to enjoy the theatre, including (but certainly not limited to) people on the Autism Spectrum, people with sensory or communication disorders, neurological disorders, or people with a learning disability. We will have a more relaxed attitude about how our audience experiences the performance and ask all audience members to be aware of people’s needs to move or make noise.

We Will Rock You Sing-Along Night Wednesday, August 3
Feeling like “[You] Want to Break Free?” Blending the excitement of a musical with the electricity of a concert, join us for a special We Will Rock You Sing-along Night on August 3 for some fist-pumping, foot-stomping fun. Featuring more than 20 hits from QUEEN’s discography, “We Will Rock You” arrives at the Malkin Bowl having rocked more than 16 million audience members around the globe! Come sing your heart out dressed like your favourite rock stars for this special evening of rock-and-roll.

How Can Cities Respond To Extreme Heat?