Before the non-profit society VocalEye launched in Vancouver in 2009, Amy Amantea, who lives with legal blindness, felt lost when she went out to enjoy live theatre. “I was having a very expensive two-hour nap. I’d buy a ticket, I’d sit in the nice, dark, comfy theatre, and I couldn’t follow the plotline to save my life. So, it got boring. I would hear people laugh or ooh or aah, and I would have no idea what we were engaged with, so I couldn’t be a part of that,” she says. Now, thanks to VocalEye’s live descriptions at performances, she can feel belonging at a theatre experience.

Using the services of VocalEye is one of a wide range of initiatives that the Arts Club and theatre companies across the city are implementing to increase their accessibility. According to the Arts Club’s accessibility mission statement, accessibility is about “creating a barrier-free environment for all its patrons, staff, artists, volunteers, and third-party contractors. We want to provide a place where all people feel welcome and can maintain their independence and their dignity.” As Amantea, the Accessibility Coordinator at the Arts Club Theatre Company, argues, “theatre belongs to everyone.” 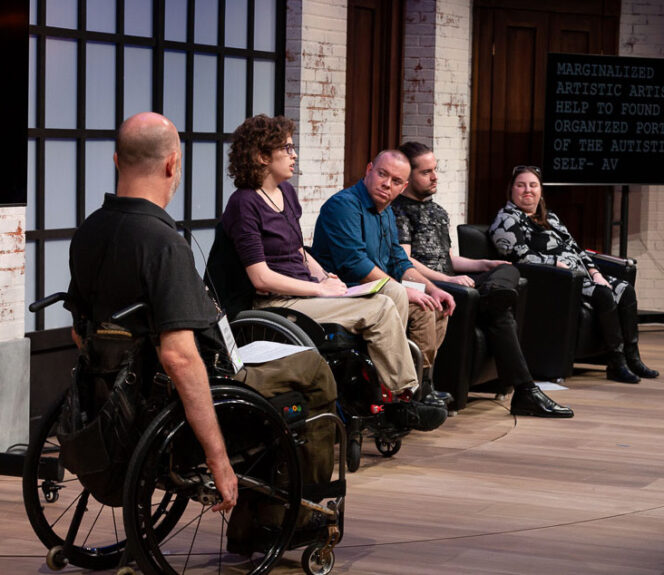 Amy Amantea (far right) on a panel at the “Theatre and Accessibility in a Digital World” Symposium (2019); Photo Credit: Moonrider Productions

Amantea stresses that accessibility is an ongoing process that involves every aspect of a theatre company’s operations, including a shift in mindset. “Sometimes the fear is that if I don’t know how to do it right, if I can’t be 100% accessible, then I should wait until I am before I put something out there, which is a stigmatization I like to debunk. I like to look at accessibility as a continuum,” Amantea says. 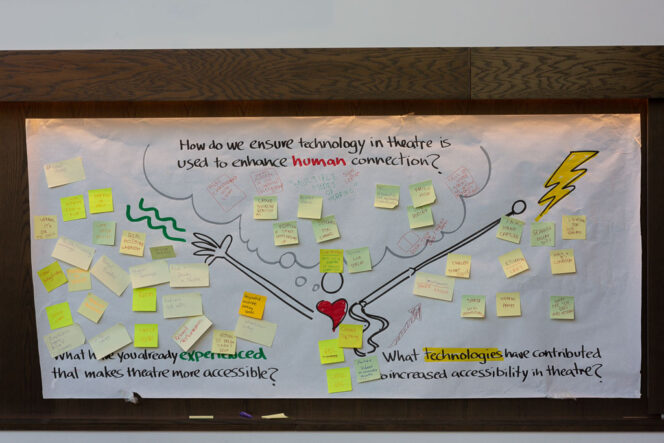 A huge part of accessibility is starting conversations. In October 2019, the Arts Club and Bard on the Beach co-partnered to host a symposium called “Theatre and Accessibility in a Digital World.” Kevan Ellis, Director of Education at the Arts Club, says the symposium was a start of really great connections and brainstorming. “We learned a lot from it. Bard on the Beach and Arts Club wanted to offer a forum for discussion,” he says.

Then, when the pandemic hit and in person performances weren’t an option, the Arts Club and other theatre companies in the city were forced to pivot to live streaming. This was a huge leap forward in accessibility since it involved investing in equipment and technical procedures for more accessible, virtual shows. 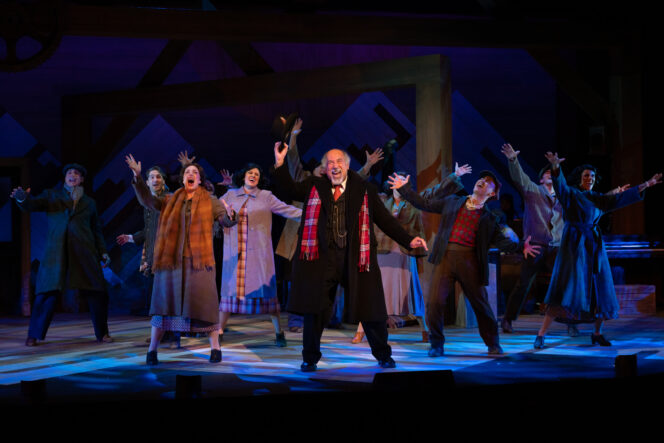 Now that they’re back to in person performances, besides offering VocalEye’s live description for some shows (e.g., December 12 at 2pm and December 17 at 8pm for Dolly Parton’s Smoky Mountain Christma Carol), the Arts Club has a range of other initiatives to give patrons a barrier-free experience. Pre-pandemic, they began hosting relaxed performances, which are laid-back when it comes to movement and noise, providing access to a range of audience members, like those living with autism or those with young children. “They were very successful. We know that consistency is a big part of it, making sure we’re offering this year to year, for multiple performances and also multiple styles of performances, so it’s not just family shows,” Ellis says. For example, Kim’s Convenience will feature a relaxed performance on March 20.

They’re also developing ASL (American Sign Language) performances by engaging with the deaf community for feedback on what works best for them. “The traditional ASL performance where the interpreter is to the far left or far right of the stage is not really how [deaf patrons] want to engage with theatre,” Amantea says. Besides centering the interpreter, reserving seats with the best sightlines and training box office staff on VRS (Video Relay Service) are part of the accessibility process. The next ASL performance will be for Kim’s Convenience on March 23.

In addition, the Arts Club is working on accessibility for the deaf blind community who have very specific needs. “For example, you might need close range ASL, so you might need your interpreter to be a foot in front of you. Or, you might need tactile ASL or tactile interpretation so somebody might have to sit in the seat beside you and tap on certain parts of your body to offer what’s being shared on stage,” Amantea says. She adds that touch tours of what’s on stage are another way to make a performance accessible for deaf blind patrons.

Amantea emphasizes that accessibility includes the hiring and organizational practices for staff, contractors, and those on stage. “If we don’t create a culture of accessibility and inclusivity – which, to me, are two different things but they are married to each other – we’re not creating an organization that is representative of our communities,” she says. For example, casting calls, which can ask for demo reels or an extensive resume, can disadvantage an artist with disabilities, who due to systemic barriers, might have had fewer auditions or parts over their career. 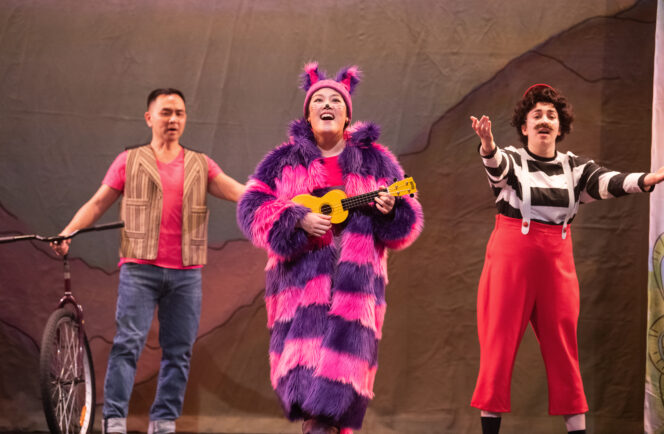 The Cultch approaches a similar holistic approach to accessibility. “We’ve always said The Cultch is for everyone, and I feel we’ve set about to try and do that. Of course, we’ve still got a ways to go, but accessibility means there are people on our stages, in our audiences, and on our staff that have different levels of accessibility that are able to come into the theatre and feel safe, feel like they belong, that they are seen, and that they are part of the community, says Lisa Mennell, Communications and Outreach Manager at The Cultch.

Recently, The Cultch underwent a physical accessibility audit, which entailed walk-throughs of the spaces and noting certain improvements that needed to made, such as widening doorways, where to place signage, and considering the best locations for wheelchair accessible seating. Washrooms have also been renovated for different needs and to make them gender-inclusive.

The theatre company offers ASL, VocalEye, and relaxed performances; they have assisted listening devices and captioning services for those with hearing loss. Plus, they promote a scent-free environment for any patrons with fragrance sensitivities, allergies, or asthma.

During the pandemic, going digital was a steep learning curve but, ultimately, the skills acquired (and equipment bought) can and will be leveraged in the long term. “We are definitely invested in doing digital throughout; maybe it isn’t going to be every show but we will have digital offerings throughout our season because we’ve had a request for it. People have embraced it,” says Mennell. For instance, The East Van Panto: Alice in Wonderland (running until January 2, 2022), is available both in person as well as online. 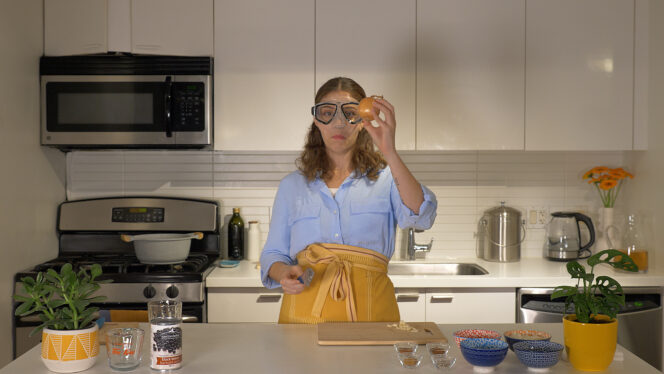 Offering a digital option ensures access to those who might otherwise not be able to enjoy the performances. “People have told us that means a lot for someone with autism who doesn’t feel comfortable in a big group of people. Or, for someone who has a scent allergy, they might feel like they’re not going to be able to breathe properly if they come into the space,” says Mennell. For The Cultch, some of the online programming will be the same as the in person performances, and in some cases, it will be unique, like a Zoom cooking show with a theatrical twist called Farm to Fable.

Accessibility can be a lot of work and expense but Mennell argues that it’s very worthwhile, even if it doesn’t necessarily translate into more revenue. “The entire reason to do it is to include different people in the conversation, I think,” she says.

As a way of promoting the financial accessibility of the performances, the theatre company runs The Cultch Connects Program, which is generously funded by their donors. Individuals who are experiencing barriers that prevent them from attending can contact Mennell at [email protected] to receive a ticket. Mennell also gets in touch with community and social service groups to distribute tickets to those who would like to attend but find it difficult to do so financially. “Every year around our Panto, which is our big show, we have a certain number of tickets set aside. I reach out to different organizations and offer tickets or family tickets, and we give away hundreds of tickets to the Panto every year,” says Mennell.

And while Mennell is very proud of the initiatives that have been implemented, she recognizes that accessibility is an in-progress commitment, one which will continue to evolve with more feedback and community-building. “We’ve made some improvements, and we have lots more to do,” she says.