Coinciding with 90 years of Reverso, Jaeger-LeCoultre has released a new short film, The Turning Point, in collaboration with British actor Nicholas Hoult – a friend of the Maison since 2017.

Filmed in Switzerland by French director and cinematographer Théo Gottlieb, it is a quietly beautiful reflection on life’s turning points – with the Reverso as an allegory for those pivotal moments that determine whether we remain as we are or ‘turn’ and go further.

IN EVERY STORY THERE IS A TURNING POINT

The narrative follows Nicholas through the process of an audition, contrasting moments of intense focus as he prepares to go onstage, with periods of calm reflection amid the forests of the Vallée de Joux. As the film moves between the two settings, the actor flips the Reverso Tribute Duoface Tourbillon on his wrist to reveal its second, contrasting face. The second time zone on the reverse side subtly underlines the sense of reaching a new point.

These turning points are the essence of who we really are – the transcendent moments in our life’s journey that take us from where and what we are, to reveal what we can become. The moments when everything clicks beautifully into place – symbolised by the gentle and satisfying click of the Reverso as it locks into its new position.

Moving at a gentle pace through visually beguiling settings, the film explores abstraction and reality, nature and the man-made – revealing the beauty of each, and capturing the essence of the Reverso.

The Reverso Tribute Duoface Tourbillon was chosen for this film because it so perfectly embodies the Manufacture’s never-ending quest for excellence and innovation. Uniting a flying tourbillon with the Duoface concept for the first time, it elevated the Reverso to a new level of refinement and sophistication, both technically and aesthetically.

For Nicholas, the Reverso has a special appeal: “The two faces really express my life: the character I play when I work, and the person I am when I’m not working.”

Speaking of turning points in his own life, Nicholas emphasises the power of focus and discipline, balanced by pivotal moments of quiet reflection: “Being immersed in nature – walking in the woods, or going surfing – puts me into a state of peace, where I feel at one with the world. I come back refreshed, revitalised and ready to get back into action.”

In this new film, the turning of the Reverso symbolises every such pivotal moment – and, in doing so, is an exquisite celebration of our human potential.

Every story is made of moments.

But a true story has this one moment: Its turning point.

This moment when you summon the past to find the inner strength and the courage to go further.

This moment where time gathers. Every wish, every hope, all our experiences reunited in a heartbeat. And nothing will ever be the same again.

It’s all about constant dedication.

And at this point, all it takes is one final inspiration, one final push, to overcome this moment of truth…and finally reach the point, where the past is the past, the future ready to unfold, and the story ready to be told.

Nicholas Hoult has become one of Hollywood’s most sought-after actors. Known for blockbuster films like the X-MEN franchise as well as for award-winning films like THE FAVOURITE, his upcoming projects reflect his agility with appearances in international franchises as well as character-driven dramas.

Hoult can most recently be seen in the critically-acclaimed, Golden Globe, Screen Actors Guild and Emmy nominated Hulu series, THE GREAT. His performance earned him Golden Globe and Screen Actors Guild nominations. He will appear in season two of the series, for which he serves as an Executive Producer. Hoult is currently in production of Mark Mylod THE MENU, opposite Anya Taylor-Joy. 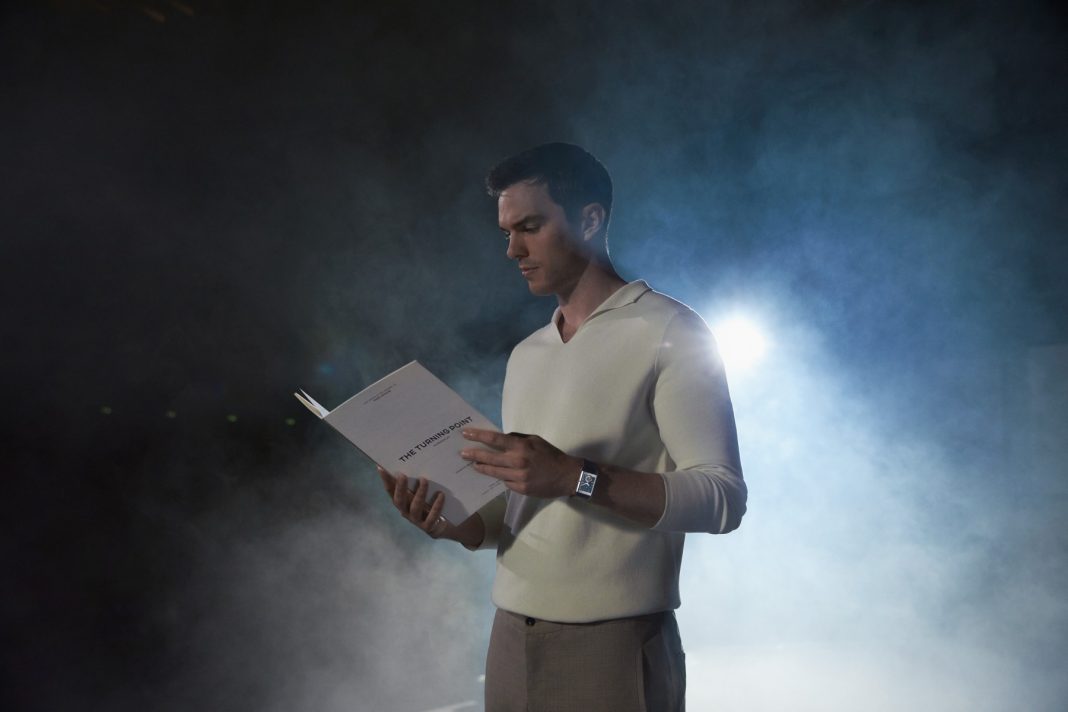 Jaeger-LeCoultre Presents A New Film ‘The Turning Point’ With Nicholas Hoult, Capturing The Essence Of The Reverso