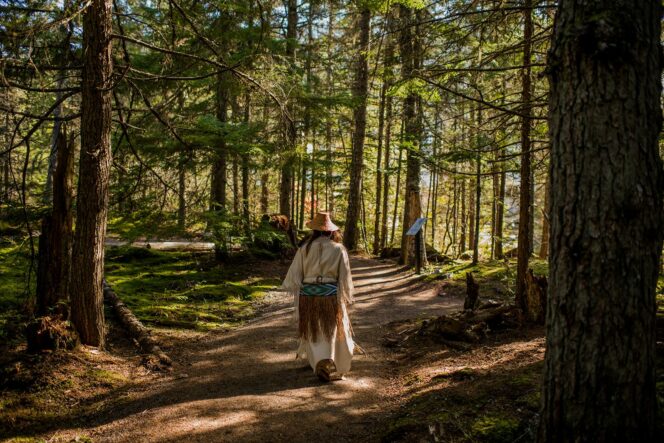 September 30 marks two very important Days for Indigenous peoples in Canada: Orange Shirt Day, which raises awareness about the history and ongoing legacy of residential schools, and the National Day for Truth and Reconciliation, a new federal statutory holiday that invites reflection and the honouring of survivors of residential school.

A hopeful part of the Reconciliation process lies with the many Indigenous-run cultural centres that exist in British Columbia, including the Haida Heritage Centre at Kay Llnagaay on Haida Gwaii and the U’Mista Cultural Centre at Alert Bay.

At these centres, Indigenous people speak proudly for themselves, as opposed to being spoken for, as has happened and still continues to occur. For example, the Squamish Lil’wat Cultural Centre (SLCC) in nearby Whistler does incredible work in celebrating the heritage and stories of the Sk̲wx̲wú7mesh and L̓il̓wat7úl Nations and their connections to their shared territory. “We really reflect where our Nations have come from but also currently where we are,” says Alison Pascal, Curator at the Squamish Lil’wat Cultural Centre.

The Squamish Lil’wat Cultural Centre (SLCC) honours the overlapping territory and culture of the Sk̲wx̲wú7mesh and L̓il̓wat7úl Nations, a relationship that was formalized in 2001 in a historic Protocol Agreement. It restored the harmonious collaboration that existed in the past when the two Nations shared a village called Spo7ez at Function Junction in Whistler.

The Centre contains exhibits, a gift shop, and a Thunderbird Café, as well as runs a host of tours, performances, craft activities, and events/workshops. It also functions as a private event space for weddings, meetings, and other gatherings. 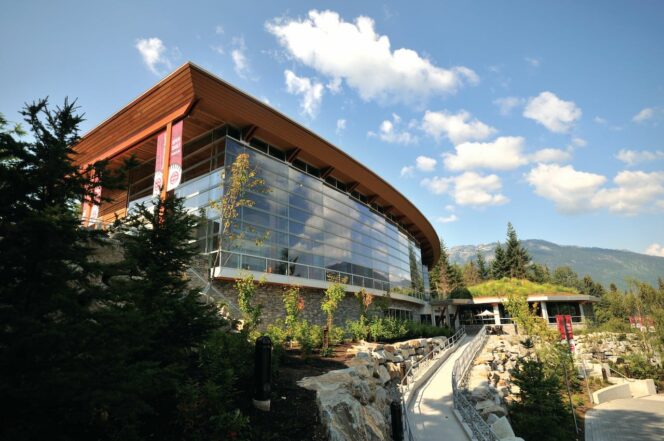 For Pascal, a member of the Lil’wat Nation, the SLCC plays an important cultural role for both Squamish and Lil’wat peoples, as well as for those from outside of their two Nations. “We are hoping that when we have people from our own communities come in, that they feel a real connection to the SLCC, that they view it as their cultural centre. Often, people will be looking at photos for their ancestors to see if they have that personal connection,” says Pascal.

Participating in traditions, like traditional songs, dances, and feasts, revives culture that the Canadian government long suppressed. Pascal explains: “For our community, it’s that celebration of culture that was not allowed for a long time. So, for us, it’s really important to be able to celebrate our culture out in the open and share it.” 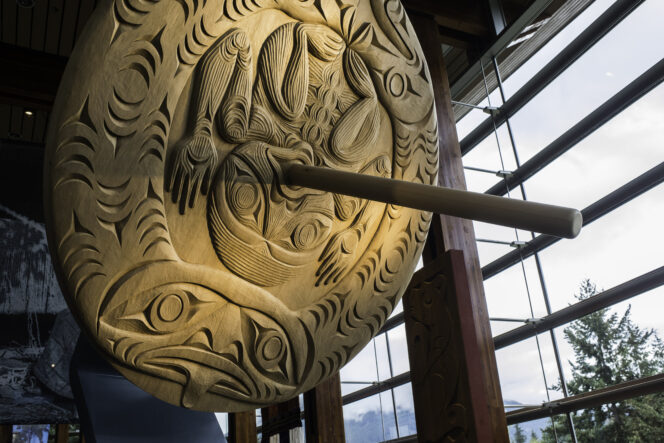 For visitors from outside of the two Nations, the SLCC becomes a vehicle for filling in gaps of knowledge as well as overcoming stereotypes of Indigenous peoples, many a result of the legacy of residential schools. “For non-Indigenous people, it’s a way for them to meet some Indigenous people, and talk to us and build those relationships that in the years before weren’t as easy to have,” says Pascal.

One of the first ways of getting to know the Squamish and Lil’wat Nations is through a signature tour. The main tour, called “What We Treasure,” consists of Cultural Ambassadors who lead groups through the Centre, talking about the history and cultural importance of various artifacts and art pieces in the SLCC’s permanent exhibit. “They also start to talk about their family connections to them because both the the Sk̲wx̲wú7mesh and L̓il̓wat7úl Nations had oral histories, so everything was shared by word of mouth,” says Pascal. As a result, art practices, like weaving and carving, helped the remembering process within a specific family and a larger community. 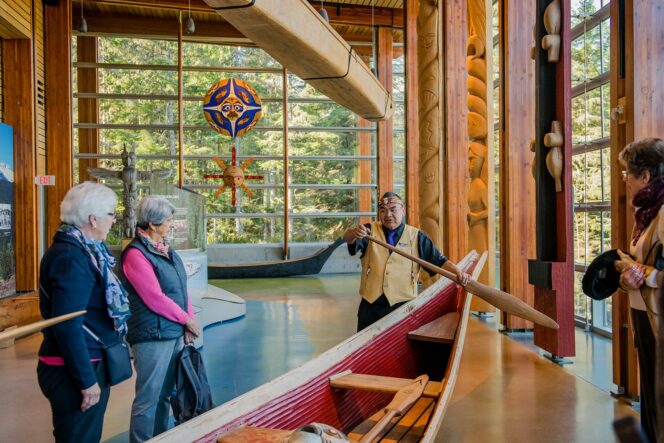 In addition to the “What We Treasure” exhibit, the SLCC features temporary exhibits that examine the deep traditions and modern vitality of the two Nations’ cultures. They just hosted a traveling exhibit called Boarder X on contemporary art by Indigenous surfers, skateboarders, and snowboarders (the exhibit opens at the Museum of Vancouver on October 2).

Next up is an exhibit (running approximately from September 30 to January 2022), curated by Pascal that educates visitors about ancient Indigenous medicine, focusing on the Indigenous medicine wheel, which treats the body holistically by taking into account aspects like spirituality and emotions. “Our view of medicine is more applicable to all areas of your life. If you were out of balance, it would start to show through physical symptoms, so you would have to adjust all parts of the medicine wheel to bring yourself into alignment,” says Pascal. 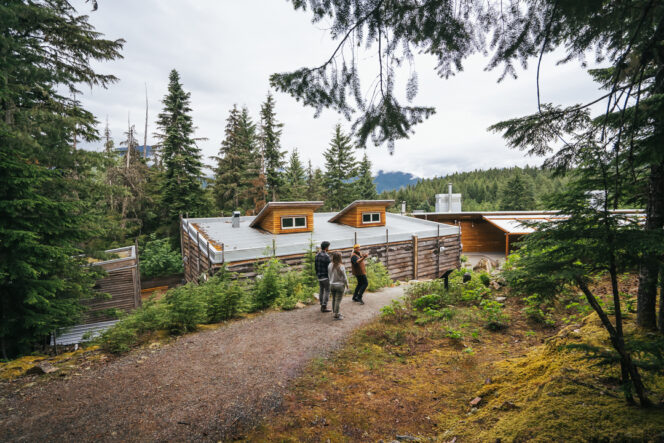 Also launching on September 30 and running until October 14 will be a temporary exhibit on residential schools in order to answer visitors’ questions. Pascal’s mother attended residential school, and she herself went to a residential day school. “These subjects are really triggering. It can be emotionally taxing for our staff to answer some of those harder questions, so we want to have it there in writing so that people can learn about it [residential school] without that emotional tax,” she says. On September 30, there will be drum circles, traditional healing ceremonies, and an appearance by Hereditary Chief Janice George from the Squamish Nation, all of which will be open to the public.

Although part of the work of the SLCC involves teaching visitors about very difficult history, the Centre is also a very joyful, vibrant cultural space for Squamish and Lil’wat communities, particularly for the next generation. “We’re really trying to provide an avenue for young people to connect to the culture and feel that pride,” says Pascal.

The SLCC run an Indigenous Youth Ambassador (IYA) Program, by which individuals aged 16 to 30, receive paid business training over the course of twelve weeks. Georgina Dan, a member of the Lil’wat Nation and Cultural Administration Coordinator at the SLCC, participated in the IYA Program after being hired as a Cultural Ambassador. Not only did she get trained in food and beverage, retail, and landscaping, she also learned about art and culture, like traditional drumming, from community knowledge keepers. 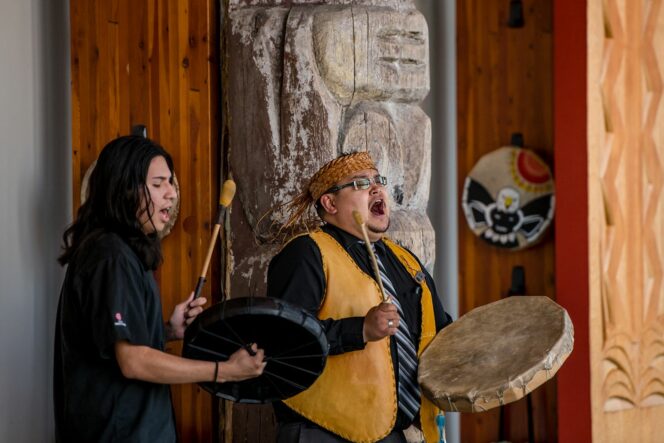 Even though Dan has taken on an administrative role at the SLCC, she continues to give tours to visitors. “I really like the connection between people and myself, and really making those connections between the cultures. A lot of cultures are quite similar, and a lot of people haven’t really had the opportunity to learn about Indigenous people before. Being able to share my story now is quite meaningful,” she says. She adds that many visitors are unaware that Whistler represents the unceded shared territory of the Squamish and Lil’wat Nations, and are interested in learning about the area’s long history. 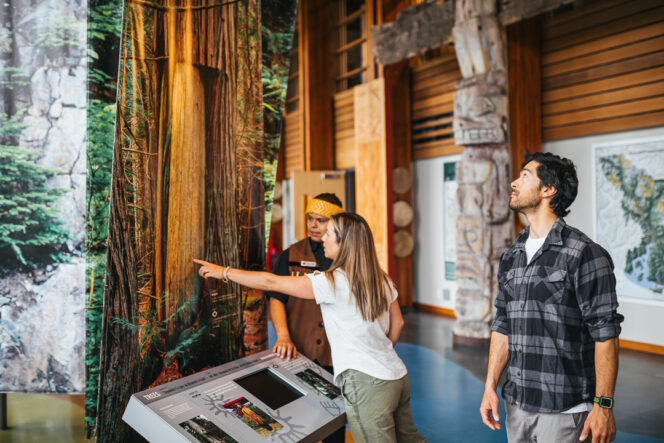 Both Pascal and Dan are particularly proud of a recent initiative of the SLCC: the production of Songs from Our Nations: Volume 3 (available for purchase at the gift shop as well as from various online platforms). It contains twelve traditional songs, like the “Crow Song,” performed by SLCC Ambassadors (5 Squamish and 6 Lil’wat), including Dan. “We asked permission for these songs to learn them and to share them in such a public way. A lot of these songs were part of revitalization as well. There were a few songs that I personally didn’t know the language to. And we had some people come in to teach us not only how to say these words, but the translations as well,” says Dan. Three mentors from each Nation were enlisted as language advisors, song holders, and knowledge keepers.

“I still get kind of emotional when I listen to the CD, to be honest,” says Dan, explaining that the “Working Song,” a powerful song from the Lil’wat Nation, particularly resonated with her.

Dan has worked at the SLCC for five years and continues to find her work rewarding because of the community aspect of her job. “I really like to call this home. I work with family. We’re all so close knit,” she says.

She and other staff at the many Indigenous-run cultural centres across the province perform such exciting and necessary work. By sharing their Nations’ stories, songs, and dances, they forge community, provide education, and champion optimism on the path to Reconciliation.

Further information about B.C.’s Indigenous-run cultural centres can be found via Indigenous Tourism BC.