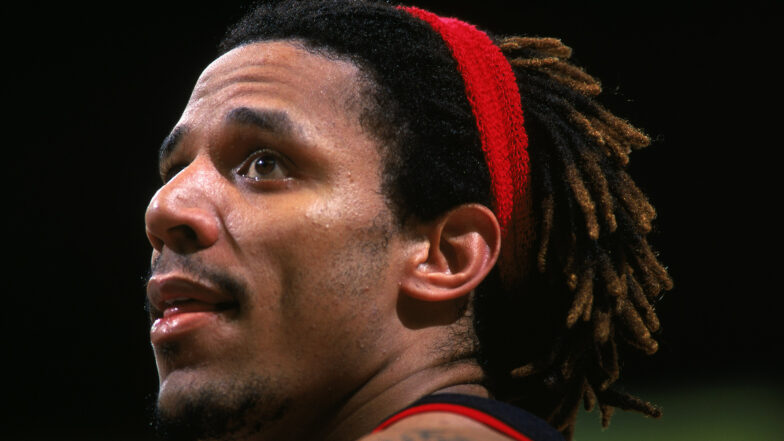 Growing up, he battled hulking elbows from older neighborhood kids in the rural community of Georgetown, Ohio. As a budding NBA star, he suffered bumps, bruises and lacerations delivered by Karl Malone, a symbol of the NBA’s iron man. In his personal life, he agonized over life-altering conversations with the women closest to him. During the twilight of his basketball tenure, he felt the demoralizing effect of hearing, “You have Parkinson’s.”

These bouts of pain, and more, are outlined in Grant’s newly-published novel, ‘Rebound: Soaring in the NBA, Battling Parkinson’s, and Finding What Really Matters,’ a brutally honest and open look into his 12-year NBA career and life outside of basketball.

As a Midwesterner with a lot to prove, Grant was a changed man after his first dose of the NBA in Sacramento, CA after being drafted No. 8 overall in the 1994 draft.

He met the love of his life, Gina, a 19-year-old Kings’ dancer who was willing to break the player-dancer dating policy to be with him. He became close friends with up-and-coming singer-songwriter Raphael Saddiq. He lived in a duplex where his cousin Jermaine was a frequent guest – along with other bachelors from the Kings or his hometown.

In his book, Grant talks all about the pressures of being a young and talented basketball player unaccustomed to celebrity pressures. Away trips meant plenty of freedom. There was Amanda, from Oakland, who passed her number his way after a game. Then there was Monica, from Vancouver, who he met one night at the bar of a club. He fathered children with both women. He tried to keep the news to himself, but eventually, word would travel fast if he said nothing.

Gina, a true bright spot in his life, vowed to stick it out in their relationship.

“I owe a lot to my first wife, Gina,” Grant says. “Even when things would go bad and I’d say, ‘Alright, man. I gotta focus on ball. I’m not gonna see ‘em cause I’m not going to put up with this.’ She would grab me and say, ‘Look, you need to see your sons.’”

Grant had secrets on the court as well. After being traded to Portland following his third season, he tore his labrum in his shooting shoulder in a pickup game during the offseason. Miraculously, he played through it all year without telling a soul.

“The one thing I didn’t want to add to all that pain was letting down the community of Portland,” Grant said. “Clyde Drexler, Chris Dudley, Jerome Kersey, Cliff Robinson… All those guys were coming out and they were beloved players. I knew that if I didn’t play, I would never earn the fans’ support.”

The book closes in on Grant’s time with the late-90s Trail Blazers – a team some coined as the “Jail Blazers” – for their difficulty staying out of trouble on and off the court.

“We looked at ourselves as the black sheep of the league,” Grant says. “We were a small market, we had a ton of talent, but we were the brothers you’d love to hate.”

Some of Grant’s most enticing rivalries come out in full form in his writing, including the 1999 Western Conference Semifinals, where Grant battled Karl Malone.

In the first quarter of Game 5 that postseason, Grant took a shot up high from Malone that left blood streaming down his face. He returned to the game a quarter later with six stitches. 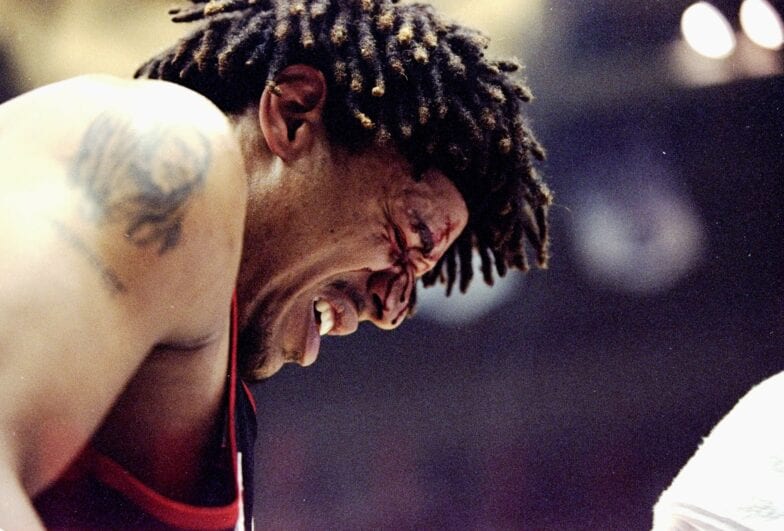 Brian Grant #44 of the Portland TrailBlazers was cut above the eye during the game against the Utah Jazz at the Delta Center in Salt Lake City, Utah. Mandatory Credit: Vincent Laforet /Allsport

“It was the elbow that sent shockwaves around the country,” Grant says.

In a series-ending Game 6, Grant held Malone to only eight points and seven rebounds in 45 minutes played.

“The Jazz matchup had so much drama wrapped up into it,” Grant says.

“There might have been a few people who knew who Brian Grant was, but after that series, the whole country knew.”

Grant was able to manage ups and downs until everything came crashing down on him. Near the end of his professional basketball career, his body began to give out on him and his hand began to shake uncontrollably.

The book highlights one practice in his final NBA year in Phoenix where Grant drove to the basket in a friendly game of 1-on-1 with veteran Kurt Thomas. After trying to explode off his left leg for a layup, Grant collapsed awkwardly. He got up and shrugged it off, but he knew something was off.

Shortly after, on a flight with trusted friend and natural healer, Philippe Manicom, Grant’s uncontrollable twitch in his hand bothered him. He recalls trying to make sense of it all.

“The doctors said it could be this or this…”

“Brother,” Manicom said. “I’m just going to tell you, cause I love you… You have Parkinson’s.”

Grant saw more specialists, and the diagnosis rang true. As the reality of his disease set in, he educated himself. He began to understand why his convulsion was relentless and why his brain’s dopamine supply diminished. He was thankful Parkinson’s wasn’t a death sentence, and that he could still walk his daughters down the aisle, but that didn’t stop him for being sorry for himself. He began taking all kinds of expensive medication to get his body right.

He remembers taking his own forms of medication. Endless pills, alcohol. He tirelessly argued with Gina, his wife. He wouldn’t leave his pitch-black bedroom.

In retelling his darkest moments, Grant doesn’t hold back hashing out the depths of his monstrous depression post-retirement.

“It was like falling off a cliff,” Grant says.

With basketball far behind him, Grant is now an advocate for Parkinson’s Awareness. He heads the Brian Grant Foundation, which focuses on exercise, nutrition and community to help people with Parkinson’s manage symptoms, maintain overall health and prevent other serious illnesses. He’s partnered with Michael J. Fox and other celebrities to host events spreading awareness. He’s climbed Mount St. Helen’s. He’s a proud father of eight children (six boys and two girls) who all care deeply for each other despite their backgrounds.

Grant thanks all those through the years who were there for him even though he didn’t realize it at the time. His ex-wives, his teammates, coaches, relatives, Parkinson’s advocates and many others.

Sure, Grant had a fascinating and unique basketball path. He shared the floor with phenoms like Scottie Pippen, Rasheed Wallace, Kobe Bryant, Alonzo Mourning, Dwyane Wade, Amar’e Stoudemire, Steve Nash and more. He’s the embodiment of a bruising power forward in a grinding NBA era.

What’s truly astonishing, however, is knowing the mental ghosts he’s fought to be the man he is today.

In ‘Rebound,’ Grant provides a basketball story, but more importantly, a story about life that’s worth telling.

Without A Fresh New Vision, The Next Conservative Prime Minister Risks Leading Their Party To Election Loss